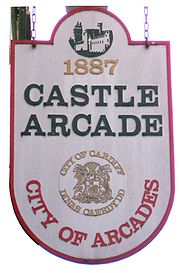 Shopping arcades in Cardiff include indoor shopping centres
Shopping mall
A shopping mall, shopping centre, shopping arcade, shopping precinct or simply mall is one or more buildings forming a complex of shops representing merchandisers, with interconnecting walkways enabling visitors to easily walk from unit to unit, along with a parking area — a modern, indoor version...
and arcades
Arcade (architecture)
An arcade is a succession of arches, each counterthrusting the next, supported by columns or piers or a covered walk enclosed by a line of such arches on one or both sides. In warmer or wet climates, exterior arcades provide shelter for pedestrians....
in Cardiff city centre
Cardiff city centre
Cardiff city centre is the central business district of Cardiff, Wales. The area is tightly bounded by the River Taff to the west, the Civic centre to the north and railway lines and two railway stations - Central and Queen Street - to the south and east respectively...
, Wales
Wales
Wales is a country that is part of the United Kingdom and the island of Great Britain, bordered by England to its east and the Atlantic Ocean and Irish Sea to its west. It has a population of three million, and a total area of 20,779 km²...
. Cardiff
Cardiff
Cardiff is the capital, largest city and most populous county of Wales and the 10th largest city in the United Kingdom. The city is Wales' chief commercial centre, the base for most national cultural and sporting institutions, the Welsh national media, and the seat of the National Assembly for...
is known as the "City of Arcades", due to the highest concentration of Victorian
Victorian era
The Victorian era of British history was the period of Queen Victoria's reign from 20 June 1837 until her death on 22 January 1901. It was a long period of peace, prosperity, refined sensibilities and national self-confidence...
, Edwardian
Edwardian period
The Edwardian era or Edwardian period in the United Kingdom is the period covering the reign of King Edward VII, 1901 to 1910.The death of Queen Victoria in January 1901 and the succession of her son Edward marked the end of the Victorian era...
and contemporary
Modern architecture
Modern architecture is generally characterized by simplification of form and creation of ornament from the structure and theme of the building. It is a term applied to an overarching movement, with its exact definition and scope varying widely...
indoor shopping arcades in any British city.

Up until the 1790s there were only 25 retail shops in Cardiff. Most shopping at that time was made from market stalls
Stall (enclosure)
A stall is a small enclosure of some kind, usually less enclosed than a room.-Market stall:A market stall is usually an immobile temporary structure erected by merchants to display and shelter their merchandise...
. The opening of the Royal Arcade in 1858, which was the first indoor arcade built in Cardiff, significantly increased the number of shops in Cardiff.

Cardiff's Victorian arcades have been attracting new shops and customers since emerging from the economic recession. Existing retailers have expanded which demonstrates resurgence of the capital’s unique shopping malls, according to the landlords, Curzon, who is responsible for the High Street, Castle, Duke Street and Wyndham arcades. The area around the arcades will be affected by pedestrianisation of High Street in late 2010, to create the £2.5m Castle Quarter. This is expected to attract more shoppers and tourists to the Victorian arcades.