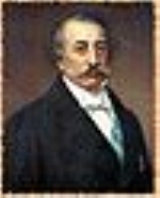 Encyclopedia
This is a list of the heads of government
Head of government
Head of government is the chief officer of the executive branch of a government, often presiding over a cabinet. In a parliamentary system, the head of government is often styled prime minister, chief minister, premier, etc...
of the modern Greek state
History of modern Greece
The history of modern Greece covers the history of Greece from the recognition of independence from the Ottoman Empire in 1832 after the Greek War of Independence to the present day.- Background :In 1821, the Greeks rose up against the Ottoman Empire...
, from its establishment during the Greek Revolution
Greek War of Independence
The Greek War of Independence, also known as the Greek Revolution was a successful war of independence waged by the Greek revolutionaries between...
to the present day. Although various official and semi-official appellations were used during the early decades of independent statehood, the title of Prime Minister
Prime Minister of Greece
The Prime Minister of Greece , officially the Prime Minister of the Hellenic Republic , is the head of government of the Hellenic Republic and the leader of the Greek cabinet. The current interim Prime Minister is Lucas Papademos, a former Vice President of the European Central Bank, following...
has been the formal designation of the office at least since 1843. Note that the numbering system in the list is arbitrary and has no official status.


Kingdom of Greece
Kingdom of Greece
The Kingdom of Greece was a state established in 1832 in the Convention of London by the Great Powers...
- Wittelsbach
Wittelsbach
The Wittelsbach family is a European royal family and a German dynasty from Bavaria.Members of the family served as Dukes, Electors and Kings of Bavaria , Counts Palatine of the Rhine , Margraves of Brandenburg , Counts of Holland, Hainaut and Zeeland , Elector-Archbishops of Cologne , Dukes of...
Dynasty (1832–1862)

The heads of government during the reign of King Otto
Otto of Greece
Otto, Prince of Bavaria, then Othon, King of Greece was made the first modern King of Greece in 1832 under the Convention of London, whereby Greece became a new independent kingdom under the protection of the Great Powers .The second son of the philhellene King Ludwig I of Bavaria, Otto ascended...
. Note: all dates are Old Style.

The heads of government during the first period of the Glücksburg dynasty.

The heads of government during the second period of the Glücksburg dynasty, including the rival governments during the Second World War and the Civil War, as well as the 1967-74 military regime.