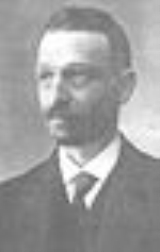 Dimitrios Gounaris (January 5, 1866, Patras
Patras
Patras , ) is Greece's third largest urban area and the regional capital of West Greece, located in northern Peloponnese, 215 kilometers west of Athens...
– November 15, 1922, Athens
Athens
Athens , is the capital and largest city of Greece. Athens dominates the Attica region and is one of the world's oldest cities, as its recorded history spans around 3,400 years. Classical Athens was a powerful city-state...
) was the Prime Minister of Greece from March 10, 1915 to August 23, 1915 and April 8, 1921 to May 16, 1922. Leader of the People's Party
People's Party (Greece)
The People's Party of Greece was a conservative and pro-monarchist political party founded by Dimitrios Gounaris, the main political rival of Eleftherios Venizelos and his Liberal Party. The party existed from 1920 until 1958....
, he was the main right-wing
Right-wing politics
In politics, Right, right-wing and rightist generally refer to support for a hierarchical society justified on the basis of an appeal to natural law or tradition. To varying degrees, the Right rejects the egalitarian objectives of left-wing politics, claiming that the imposition of equality is...
opponent of his contemporary Eleftherios Venizelos
Eleftherios Venizelos
Eleftherios Venizelos was an eminent Greek revolutionary, a prominent and illustrious statesman as well as a charismatic leader in the early 20th century. Elected several times as Prime Minister of Greece and served from 1910 to 1920 and from 1928 to 1932...
.

He studied law in Athens University and continued his studies in Germany
Germany
Germany , officially the Federal Republic of Germany , is a federal parliamentary republic in Europe. The country consists of 16 states while the capital and largest city is Berlin. Germany covers an area of 357,021 km2 and has a largely temperate seasonal climate...
, France
France
The French Republic , The French Republic , The French Republic , (commonly known as France , is a unitary semi-presidential republic in Western Europe with several overseas territories and islands located on other continents and in the Indian, Pacific, and Atlantic oceans. Metropolitan France...
and England
England
England is a country that is part of the United Kingdom. It shares land borders with Scotland to the north and Wales to the west; the Irish Sea is to the north west, the Celtic Sea to the south west, with the North Sea to the east and the English Channel to the south separating it from continental...
, before returning to his native Patras
Patras
Patras , ) is Greece's third largest urban area and the regional capital of West Greece, located in northern Peloponnese, 215 kilometers west of Athens...
. He was elected deputy for Achaea
Achaea
Achaea is one of the regional units of Greece. It is part of the region of West Greece. It is situated in the northwestern part of the Peloponnese peninsula. The capital is Patras. The population exceeds 300,000 since 2001.-Geography:...
in 1902 and distinguished himself as an orator and a member of the so-called "Japanese Group" that opposed the Georgios Theotokis
Georgios Theotokis
Georgios Theotokis was a Greek politician and four times Prime Minister of Greece. He represented the New Party or Neoteristikon Komma .- Biography :...
government in 1906 - 1908. Gounaris himself, however, joined the government in 1908 as Finance Minister, hoping to implement a reformist program, thereby causing the dissolution of the group, although he was soon forced to resign. Despite his progressive views (he was an admirer of the Bismarck
Otto von Bismarck
Otto Eduard Leopold, Prince of Bismarck, Duke of Lauenburg , simply known as Otto von Bismarck, was a Prussian-German statesman whose actions unified Germany, made it a major player in world affairs, and created a balance of power that kept Europe at peace after 1871.As Minister President of...
ian German social laws), his conservative political thinking turned him into a leading opponent of Eleftherios Venizelos
Eleftherios Venizelos
Eleftherios Venizelos was an eminent Greek revolutionary, a prominent and illustrious statesman as well as a charismatic leader in the early 20th century. Elected several times as Prime Minister of Greece and served from 1910 to 1920 and from 1928 to 1932...
. He was appointed Prime Minister after Venizelos' first resignation in 1915 by King Constantine I
Constantine I of Greece
Constantine I was King of Greece from 1913 to 1917 and from 1920 to 1922. He was commander-in-chief of the Hellenic Army during the unsuccessful Greco-Turkish War of 1897 and led the Greek forces during the successful Balkan Wars of 1912–1913, in which Greece won Thessaloniki and doubled in...
. For his anti-Venizelist role he was exiled with other prominent anti-Venizelists to Corsica
Corsica
Corsica is an island in the Mediterranean Sea. It is located west of Italy, southeast of the French mainland, and north of the island of Sardinia....
in 1917 after Venizelos' return to power in Athens
Athens
Athens , is the capital and largest city of Greece. Athens dominates the Attica region and is one of the world's oldest cities, as its recorded history spans around 3,400 years. Classical Athens was a powerful city-state...
. He managed to escape to Italy
Italy
Italy , officially the Italian Republic languages]] under the European Charter for Regional or Minority Languages. In each of these, Italy's official name is as follows:;;;;;;;;), is a unitary parliamentary republic in South-Central Europe. To the north it borders France, Switzerland, Austria and...
in 1918, but was able to return to Greece only in 1920, as to partake in the crucial November elections as the de facto leader of the "United Opposition", amidst the ongoing Asia Minor Campaign
Greco-Turkish War (1919-1922)
The Greco–Turkish War of 1919–1922, known as the Western Front of the Turkish War of Independence in Turkey and the Asia Minor Campaign or the Asia Minor Catastrophe in Greece, was a series of military events occurring during the partitioning of the Ottoman Empire after World War I between May...
.

After Venizelos' defeat, he controlled most deputies in the parliament, and was the main driving force of the following royalist governments, but himself only assumed the office of Prime Minister in April 1921. Despite his pre-electoral promises over a withdrawal from Asia Minor
Asia Minor
Asia Minor is a geographical location at the westernmost protrusion of Asia, also called Anatolia, and corresponds to the western two thirds of the Asian part of Turkey...
, unable to find a way for an 'honourable' extrication, he continued the war against Turkey
Turkey
Turkey , known officially as the Republic of Turkey , is a Eurasian country located in Western Asia and in East Thrace in Southeastern Europe...
. Although he was willing to compromise with the Turks, as he showed in the London talks in early 1921, in order to step up pressure on the Kemalist Turks, he agreed to the launch of the Greek offensive of March 1921. The Greek Army was not prepared, and the attack was repulsed in the Second Battle of İnönü
Second Battle of Inönü
The Second Battle of İnönü was fought between 26 and 31 March 1921 near İnönü in present-day Eskişehir Province, Turkey during the Greco-Turkish War , part of Turkish War of Independence...
, resulting in the first Greek defeat in the Asia Minor Campaign
Greco-Turkish War (1919-1922)
The Greco–Turkish War of 1919–1922, known as the Western Front of the Turkish War of Independence in Turkey and the Asia Minor Campaign or the Asia Minor Catastrophe in Greece, was a series of military events occurring during the partitioning of the Ottoman Empire after World War I between May...
. After the successful Greek advance towards Eskişehir
Eskisehir
Eskişehir is a city in northwestern Turkey and the capital of the Eskişehir Province. According to the 2009 census, the population of the city is 631,905. The city is located on the banks of the Porsuk River, 792 m above sea level, where it overlooks the fertile Phrygian Valley. In the nearby...
and Afyon
Afyonkarahisar
Afyonkarahisar is a city in western Turkey, the capital of Afyon Province. Afyon is in mountainous countryside inland from the Aegean coast, south-west of Ankara along the Akarçay River. Elevation...
in July, he urged the continuation of the advance towards Ankara
Ankara
Ankara is the capital of Turkey and the country's second largest city after Istanbul. The city has a mean elevation of , and as of 2010 the metropolitan area in the entire Ankara Province had a population of 4.4 million....
, which was however stopped in the Battle of Sakarya
Battle of Sakarya
The Battle of Sakarya , also known as the Battle of the Sangarios , was an important engagement in the Greco-Turkish War and Turkish War of Independence....
. After the Greeks retreated to form a new front, he appealed to the Allies, and especially Great Britain
Great Britain
Great Britain or Britain is an island situated to the northwest of Continental Europe. It is the ninth largest island in the world, and the largest European island, as well as the largest of the British Isles...
, for assistance and mediation. Although he threatened the British with unilateral withdrawal, his government maintained the Greek Army's positions, not being able to shoulder the political cost of abandoning Asia Minor and the many Greeks living there to Turkish reprisals. The deepening political crisis caused the fall of Gounaris' government in May 1922, after marginally surviving a vote of confidence, but the predominance of his followers in the National Assembly meant that he only exchanged the post of Prime Minister with that of Justice Minister in the government of Petros Protopapadakis
Petros Protopapadakis
-Life and work:Born in 1854 in Apeiranthos, Naxos, Protopapadakis studied mathematics and engineering in Paris but was keenly interested in politics. He was a professor at the Scholi Evelpidon, the military academy of Greece....
.

After the disaster of August 1922 and the rout of the Greeks by Mustafa Kemal's forces, the remnants of the Greek Army revolted in September, and the government was deposed. The predominantly Venizelist
Venizelism
Venizelism was one of the major political movements in Greece from the 1900s until the mid 1970s.- Ideology :Named after Eleftherios Venizelos, the key characteristics of Venizelism were:*Opposition to Monarchy...
rebels, under the leadership of Colonel Nikolaos Plastiras
Nikolaos Plastiras
Nikolaos Plastiras was a Greek general and politician, who served thrice as Prime Minister of Greece. A distinguished soldier and known for his personal bravery, he was known as "O Mavros Kavalaris" during the Greco-Turkish War of 1919-1922...
, formed a military tribunal to try those that were considered as responsible for the catastrophe. The so-called "Trial of the Six
Trial of the Six
The Trial of the Six or the Execution of the Six was the trial for treason, in late 1922, of the officials held responsible for the Greek military defeat in Asia Minor...
", convened in November 1922, found the defendants, Gounaris among them, guilty of treason. He was executed along with the others at Goudi
Goudi
Goudi is a residential neighbourhood of Athens, Greece, on the eastern part of town and on the foothills of Mount Hymettus. Its name descends from the 19th century Goudi family, who owned a large estate in the area...
on the same day of the verdict, on November 28. Although he undoubtedly bears a measure of responsibility for the military and diplomatic actions that led to the Asia Minor Disaster, his trial and execution are widely perceived to be more an act of scapegoating in order to vent the anger of the people, as well as being mostly motivated by the hatred of the Venizelist faction towards him.