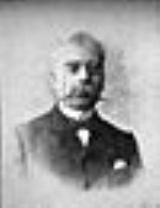 Encyclopedia
Alexandros Zaimis (9 November 1855 – 15 September 1936) was a former Greek
Greece
Greece , officially the Hellenic Republic , and historically Hellas or the Republic of Greece in English, is a country in southeastern Europe....
Prime Minister
Prime minister
A prime minister is the most senior minister of cabinet in the executive branch of government in a parliamentary system. In many systems, the prime minister selects and may dismiss other members of the cabinet, and allocates posts to members within the government. In most systems, the prime...
, Minister of the Interior, Minister of Justice, and High Commissioner
High Commissioner
High Commissioner is the title of various high-ranking, special executive positions held by a commission of appointment.The English term is also used to render various equivalent titles in other languages.-Bilateral diplomacy:...
of Crete. He served as Prime Minister six times.

He was born in Athens and was the son of Thrasyvoulos Zaimis, a former Prime Minister of Greece, and Eleni Mourouzi
Mourousis family
The Mourousis or Moruzi are a family which was first mentioned in the Empire of Trebizond. Its origins have been lost, but the two prevalent theories are that they were either a local family originating in a village which has a related name or else one that arrived with the Venetians during the...
. His brother was Asimakis Zaimis. On his father's side he was the grandson of Andreas Zaimis
Andreas Zaimis
Andreas Asimakou Zaimis was a Greek freedom fighter and government leader during the Greek War of Independence.Born in Kalavryta, in the northern Peloponnesos, Zaimis was a leader of armed men who fought the Ottoman Turks, ultimately securing Greece's freedom.In 1826, Zaimis was chosen as the...
, another former Prime Minister of Greece, and related to the great Kalavrytan family
Zaimis family
The Zaimis family are the main family of Achaea, which participated in the important role and during the Turkish rule and after the liberation during the Greek War of Independence. The family are descended from Kerpini near Kalavryta, a village which had nominated studied families.The family ...
with notable participation in the Greek War of Independence
Greek War of Independence
The Greek War of Independence, also known as the Greek Revolution was a successful war of independence waged by the Greek revolutionaries between...
from 1821. From his mother's side he was a descendent of an important Fanariote family of the Mourozidon. His family lived in Kerpini, Kalavryta in the Achaia prefecture.

In 1906, he was appointed as Ipatos Armostis (High Commissioner
High Commissioner
High Commissioner is the title of various high-ranking, special executive positions held by a commission of appointment.The English term is also used to render various equivalent titles in other languages.-Bilateral diplomacy:...
) of Crete
Cretan State
The Cretan State was established in 1898, following the intervention by the Great Powers on the island of Crete. In 1897 an insurrection in Crete led the Ottoman Empire to declare war on Greece, which led the United Kingdom, France, Italy and Russia to intervene on the grounds that the Ottoman...
and presided over a critical period of the island's history prior to the union of Crete with Greece till 1908.

Alexandros Zaimis was re-elected as Prime Minister a further five times. In 1917, Zaimis served as Prime Minister under King Constantine I
Constantine I of Greece
Constantine I was King of Greece from 1913 to 1917 and from 1920 to 1922. He was commander-in-chief of the Hellenic Army during the unsuccessful Greco-Turkish War of 1897 and led the Greek forces during the successful Balkan Wars of 1912–1913, in which Greece won Thessaloniki and doubled in...
, while Eleftherios Venizelos
Eleftherios Venizelos
Eleftherios Venizelos was an eminent Greek revolutionary, a prominent and illustrious statesman as well as a charismatic leader in the early 20th century. Elected several times as Prime Minister of Greece and served from 1910 to 1920 and from 1928 to 1932...
led a rival government controlling northern Greece. Under Entente
Triple Entente
The Triple Entente was the name given to the alliance among Britain, France and Russia after the signing of the Anglo-Russian Entente in 1907....
pressure, he resigned in favor of Venizelos in June of the same year.

Zaimis was elected the fourth and last President of the Second Hellenic Republic
President of Greece
The President of the Hellenic Republic , colloquially referred to in English as the President of Greece, is the head of state of Greece. The office of the President of the Republic was established after the Greek republic referendum, 1974 and formally by the Constitution of Greece in 1975. The...
in 1929. He was reelected in 1933. However, only two years into his second term, he was thrown out of office by Prime Minister Georgios Kondylis
Georgios Kondylis
Georgios Kondylis was a general of the Greek army and Prime Minister of Greece. He was nicknamed Keravnos, Greek for "Thunder" or "Thunderbolt".-Military career:...
, who abolished the Republic and proclaimed himself regent pending the results of a referendum on restoring the monarchy. This referendum resulted in George II
George II of Greece
George II reigned as King of Greece from 1922 to 1924 and from 1935 to 1947.-Early life, first period of kingship and exile:George was born at the royal villa at Tatoi, near Athens, the eldest son of King Constantine I of Greece and his wife, Princess Sophia of Prussia...
being recalled to the throne by almost 98 percent of the vote, an implausibly high total that could have only been obtained through fraud.

He died on 15 September 1936 in Vienna
Vienna
Vienna is the capital and largest city of the Republic of Austria and one of the nine states of Austria. Vienna is Austria's primary city, with a population of about 1.723 million , and is by far the largest city in Austria, as well as its cultural, economic, and political centre...
, Austria
Austria
Austria , officially the Republic of Austria , is a landlocked country of roughly 8.4 million people in Central Europe. It is bordered by the Czech Republic and Germany to the north, Slovakia and Hungary to the east, Slovenia and Italy to the south, and Switzerland and Liechtenstein to the...
and was buried in the First Cemetery of Athens
First Cemetery of Athens
The First Cemetery of Athens is the official cemetery of the City of Athens and the first to be built. It opened in 1837 and soon became a luxurious cemetery for famous Greek people and foreigners....
. He was married without children. The political legacy of his family was continued by his siblings and cousins.