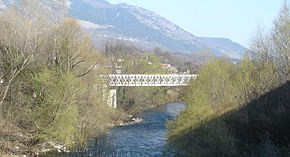 The Liri is one of the principal river
River
A river is a natural watercourse, usually freshwater, flowing towards an ocean, a lake, a sea, or another river. In a few cases, a river simply flows into the ground or dries up completely before reaching another body of water. Small rivers may also be called by several other names, including...
s of central Italy
Italy
Italy , officially the Italian Republic languages]] under the European Charter for Regional or Minority Languages. In each of these, Italy's official name is as follows:;;;;;;;;), is a unitary parliamentary republic in South-Central Europe. To the north it borders France, Switzerland, Austria and...
, flowing into the Tyrrhenian Sea
Tyrrhenian Sea
The Tyrrhenian Sea is part of the Mediterranean Sea off the western coast of Italy.-Geography:The sea is bounded by Corsica and Sardinia , Tuscany, Lazio, Campania, Basilicata and Calabria and Sicily ....
a little below Minturno
Minturno
Minturno is a city and comune in the southern Lazio, Italy, situated on the north west bank of the Liris , with a suburb on the opposite bank c...
under the name Garigliano.

The Liri's source is in the Monte Camiciola (1,701 m) in the Monti Simbruini
Monti Simbruini
The Monti Simbruini are a mountain range in central Italy, part of Apennines, on the border between the Lazio and Abruzzo regions. They border with the Monti Cantari and the Ciociaria....
of central Apennines
Apennine mountains
The Apennines or Apennine Mountains or Greek oros but just as often used alone as a noun. The ancient Greeks and Romans typically but not always used "mountain" in the singular to mean one or a range; thus, "the Apennine mountain" refers to the entire chain and is translated "the Apennine...
(Abruzzo
Abruzzo
Abruzzo is a region in Italy, its western border lying less than due east of Rome. Abruzzo borders the region of Marche to the north, Lazio to the west and south-west, Molise to the south-east, and the Adriatic Sea to the east...
, comune
Comune
In Italy, the comune is the basic administrative division, and may be properly approximated in casual speech by the English word township or municipality.-Importance and function:...
of Cappadocia
Cappadocia (Italy)
Cappadocia is a comune and town in the province of L'Aquila in the Abruzzo region of central Italy. It is part of the Marsica....
): in the nearby is the Lake Fucino, of which it has been sometimes, but erroneously, regarded as a subterranean outlet. It flows at first in a southeasterly direction through a long trough-like valley, parallel to the general direction of the Apennines, until it reaches the city of Sora
Sora, Italy
Sora is a city and comune of Lazio, Italy, in the province of Frosinone. It is built in a plain on the banks of the Liri. This part of the valley is the seat of some important manufactures, especially of paper-mills....
.
In the upper part of Isola del Liri
Isola del Liri
Isola del Liri is an Italian town in Lazio, Frosinone. As its name implies, Isola is situated between two arms of the Liri. The many waterfalls of this river and of the Fibreno are used by factories.-History:...
it receives the waters of Fibreno and then it divides into two branches which then rejoin, surrounding the lower part of the town (Isola del Liri stands for Liri Island). One branch makes a 28 metres high waterfall situated in the centre, a unique case in Europe.

A dam is built on the river after the conjunction with the Sacco River
Sacco River
The Sacco is a river of central Italy, a right tributary of the Liri.The river is formed by the confluence of two streams of the Monti Simbruini in the Apennines of Abruzzo. It flows towards south-east for a total of 87 km, crossing Ciociaria between the mountain ranges of the Ernici to the...
at Ceprano
Ceprano
Ceprano is a town and comune in the province of Frosinone, in Ciociaria traditional area, part of the Lazio region of central Italy.It is located south of Rome, and c. 127 km north of Naples.-History:...
. The last important Liri's tributary is the Melfa
Melfa
This place name appears in a number of places.US*Melfa, VirginiaItaly*Melfa Crossing, site of a World War II battle at which Major John Keefer Mahony earned a VC for valour.*Melfa River in Parco Nazionale d'Abruzzo, Lazio e Molise...
, with which it joins near Aquino
Aquino
Aquino is a town and comune in the province of Frosinone, in the Lazio region of Italy, 12 km northwest of Cassino.-History:The ancient Aquinum was a municipium in the time of Cicero, and made a colony by the Triumviri...
. After Cassino
Cassino
Cassino is a comune in the province of Frosinone, Italy, at the southern end of the region of Lazio.Cassino is located at the foot of Monte Cairo near the confluence of the Rapido and Liri rivers...
it receives the waters of the river Gari
Gari
Gari may refer to:*Gari , a Japanese condiment*Gari , a bivalve mollusc group*Gari , a cart*Garri, a West African flour*A crater on MarsIn geography:*Gari, Mali*Gari, Russia*Gari , a village near Kruševac, Serbia...
(or Rapido
Rapido
Rapido was the name of the Canadian National Railway's express passenger train service on the Quebec City-Windsor Corridor. The service was introduced on October 31, 1965, on the Montreal-Toronto route...
), and afterwards it is known as Garigliano.

The Liri-Garigliano system has a total water drainage basin of 5,020 km².

Both Strabo
Strabo
Strabo, also written Strabon was a Greek historian, geographer and philosopher.-Life:Strabo was born to an affluent family from Amaseia in Pontus , a city which he said was situated the approximate equivalent of 75 km from the Black Sea...
and Pliny
Pliny the Elder
Gaius Plinius Secundus , better known as Pliny the Elder, was a Roman author, naturalist, and natural philosopher, as well as naval and army commander of the early Roman Empire, and personal friend of the emperor Vespasian...
tell us that it was originally called Clanis, a name which appears to have been common to many Italian rivers (see for ex. Clanio and Lagni); the former writer erroneously assigns its sources to the country of the Vestini
Vestini
Vestini is the Roman exonym for an ancient Italic tribe that occupied the area of the modern Abruzzo included between the Gran Sasso and the northern bank of the Aterno river...
; an opinion which is adopted also by Lucan
Marcus Annaeus Lucanus
Marcus Annaeus Lucanus , better known in English as Lucan, was a Roman poet, born in Corduba , in the Hispania Baetica. Despite his short life, he is regarded as one of the outstanding figures of the Imperial Latin period...
. The Liris is noticed by several of the Roman
Ancient Rome
Ancient Rome was a thriving civilization that grew on the Italian Peninsula as early as the 8th century BC. Located along the Mediterranean Sea and centered on the city of Rome, it expanded to one of the largest empires in the ancient world....
poets, as a very gentle and tranquil stream, a character which it well deserves in the lower part of its course, where it was described by a nineteenth century traveller as a wide and noble river, winding under the shadow of poplars through a lovely vale, and then gliding gently towards the sea.

At the mouth of the Liris near Minturnae, was an extensive sacred grove consecrated to Marica
Marica
In Roman mythology, Marica was a nymph, the mother of Latinus. Latinus was fathered by Faunus, who was also occasionally referred to as the son of Marica. The sacred forest near Minturnae was dedicated to Marica. A lake nearby was also named after her....
, a nymph or local divinity, who was represented by a tradition, adopted by Virgil
Virgil
Publius Vergilius Maro, usually called Virgil or Vergil in English , was an ancient Roman poet of the Augustan period. He is known for three major works of Latin literature, the Eclogues , the Georgics, and the epic Aeneid...
, as mother of Latinus
Latinus
Latinus was a figure in both Greek and Roman mythology.-Greek mythology:In Hesiod's Theogony, Latinus was the son of Odysseus and Circe who ruled the Tyrsenoi, presumably the Etruscans, with his brothers Ardeas and Telegonus...
, while others identified her with Circe
Circe
In Greek mythology, Circe is a minor goddess of magic , described in Homer's Odyssey as "The loveliest of all immortals", living on the island of Aeaea, famous for her part in the adventures of Odysseus.By most accounts, Circe was the daughter of Helios, the god of the sun, and Perse, an Oceanid...
. Her grove and temple were not only objects of great veneration to the people of the neighboring town of Minturnae, but appear to have enjoyed considerable celebrity with the Romans themselves. Immediately adjoining its mouth was an extensive marsh, formed probably by the stagnation of the river itself, and celebrated in history in connection with the adventures of Gaius Marius
Gaius Marius
Gaius Marius was a Roman general and statesman. He was elected consul an unprecedented seven times during his career. He was also noted for his dramatic reforms of Roman armies, authorizing recruitment of landless citizens, eliminating the manipular military formations, and reorganizing the...
.
The source of this article is wikipedia, the free encyclopedia.  The text of this article is licensed under the GFDL.