Encyclopedia
Sora is a city
City
A city is a relatively large and permanent settlement. Although there is no agreement on how a city is distinguished from a town within general English language meanings, many cities have a particular administrative, legal, or historical status based on local law.For example, in the U.S...
and comune
Comune
In Italy, the comune is the basic administrative division, and may be properly approximated in casual speech by the English word township or municipality.-Importance and function:...
of Lazio, Italy
Italy
Italy , officially the Italian Republic languages]] under the European Charter for Regional or Minority Languages. In each of these, Italy's official name is as follows:;;;;;;;;), is a unitary parliamentary republic in South-Central Europe. To the north it borders France, Switzerland, Austria and...
, in the province of Frosinone
Province of Frosinone
The Province of Frosinone is a province in the Lazio region of Italy, with 91 comuni . Its capital is the city of Frosinone. It has an area of 3,244 km², and a total population of 489,042 .The Province was established by Royal Decree on 6 December 1926 with territories belonging to Lazio...
. It is built in a plain
Plain
In geography, a plain is land with relatively low relief, that is flat or gently rolling. Prairies and steppes are types of plains, and the archetype for a plain is often thought of as a grassland, but plains in their natural state may also be covered in shrublands, woodland and forest, or...
on the banks
Bank (geography)
A geographic bank has four definitions and applications:# Limnology: The shoreline of a pond, swamp, estuary, reservoir, or lake. The grade can vary from vertical to a shallow slope....
of the Liri
Liri
The Liri is one of the principal rivers of central Italy, flowing into the Tyrrhenian Sea a little below Minturno under the name Garigliano....
. This part
Part
Part may refer to:*Part *Part , a relation in mereology*Part , the music played or sung by an individual instrument or voice*Parts , a 1997 children's book by Tedd Arnold...
of the valley
Valley
In geology, a valley or dale is a depression with predominant extent in one direction. A very deep river valley may be called a canyon or gorge.The terms U-shaped and V-shaped are descriptive terms of geography to characterize the form of valleys...
is the seat of some important manufactures, especially of paper-mills.
The district around Sora is famous for the costumes of its peasants.

Sora, an ancient Volscian town, was thrice captured by the Romans
Roman Republic
The Roman Republic was the period of the ancient Roman civilization where the government operated as a republic. It began with the overthrow of the Roman monarchy, traditionally dated around 508 BC, and its replacement by a government headed by two consuls, elected annually by the citizens and...
, in 345, 314 and 305 BCE, before they managed, in 303, by means of a colony 4,000 strong, to confirm its annexation. In 209 it was one of the colonies which refused further contributions to the war against Hannibal. By the lex Julia
Lex Julia
Lex Julia are ancient Roman laws, introduced by any member of the Julian family....
it became a municipium
Municipium
Municipium , the prototype of English municipality, was the Latin term for a town or city. Etymologically the municipium was a social contract between municipes, the "duty holders," or citizens of the town. The duties, or munera, were a communal obligation assumed by the municipes in exchange for...
, but under Augustus
Augustus
Augustus ;23 September 63 BC – 19 August AD 14) is considered the first emperor of the Roman Empire, which he ruled alone from 27 BC until his death in 14 AD.The dates of his rule are contemporary dates; Augustus lived under two calendars, the Roman Republican until 45 BC, and the Julian...
it was colonized by soldiers of the legio IV Sorana, which had been mainly enrolled there. It belonged technically to Latium Adjectum.

Located in the Ducatus Romanus under the authority of the pope during the early Dark Ages, it was captured by the Lombards
Lombards
The Lombards , also referred to as Longobards, were a Germanic tribe of Scandinavian origin, who from 568 to 774 ruled a Kingdom in Italy...
of Gisulf I of Benevento
Gisulf I of Benevento
Gisulf I was the duke of Benevento from 680, when his brother Grimoald died. His father was Romuald I. His mother was Theodrada , daughter of Lupus of Friuli, and she exercised the regency for him for the first years of his reign....
in 705.

The castle of Sorella, built on the rocky height above the town,
was in the Middle Ages
Middle Ages
The Middle Ages is a periodization of European history from the 5th century to the 15th century. The Middle Ages follows the fall of the Western Roman Empire in 476 and precedes the Early Modern Era. It is the middle period of a three-period division of Western history: Classic, Medieval and Modern...
a stronghold of some note. In 1443 King Alfonso of Naples
Alfonso V of Aragon
Alfonso the Magnanimous KG was the King of Aragon , Valencia , Majorca, Sardinia and Corsica , and Sicily and Count of Barcelona from 1416 and King of Naples from 1442 until his death...
made Sora the seat of an independent Duchy
Duchy of Sora
The Duchy of Sora was a semi-independent state in Italy, created in 1443 by King Alfonso I of Naples and dissolved in 1796. It occupied the south-eastern part of what is today Lazio, bordering what is now Abruzzo...
for the Cantelmi; it was afterwards seized by Pope Pius II
Pope Pius II
Pope Pius II, born Enea Silvio Piccolomini was Pope from August 19, 1458 until his death in 1464. Pius II was born at Corsignano in the Sienese territory of a noble but decayed family...
, but, being restored to the Cantelmi by Pope Sixtus IV
Pope Sixtus IV
Pope Sixtus IV , born Francesco della Rovere, was Pope from 1471 to 1484. His accomplishments as Pope included the establishment of the Sistine Chapel; the group of artists that he brought together introduced the Early Renaissance into Rome with the first masterpiece of the city's new artistic age,...
, it ultimately passed to the Della Rovere
Della Rovere
Della Rovere is a noble family of Italy. Coming from modest beginnings in Savona, Liguria, the family rose to prominence through nepotism and ambitious marriages arranged by two Della Rovere popes, Francesco della Rovere, who ruled as Pope Sixtus IV and his nephew Giuliano...
of Urbino
Urbino
Urbino is a walled city in the Marche region of Italy, south-west of Pesaro, a World Heritage Site notable for a remarkable historical legacy of independent Renaissance culture, especially under the patronage of Federico da Montefeltro, duke of Urbino from 1444 to 1482...
. Against Caesar Borgia the city was heroically defended by Giovanni da Montefeltro. It was purchased by Pope Gregory XIII
Pope Gregory XIII
Pope Gregory XIII , born Ugo Boncompagni, was Pope from 1572 to 1585. He is best known for commissioning and being the namesake for the Gregorian calendar, which remains the internationally-accepted civil calendar to this date.-Youth:He was born the son of Cristoforo Boncompagni and wife Angela...
for 11,000 ducats and bestowed on the De Ciantis', the ancestors of the line of DeCiantis-Pasquale, under the suzerainty of Gregory's son, Giacomo Boncompagni
Giacomo Boncompagni
Giacomo Boncompagni was an Italian feudal lord of the 16th century, the illegitimate son of Pope Gregory XIII . He was also Duke of Sora, Aquino, Arce and Arpino, and Marquess of Vignola.A member of the Boncompagni family, he was a patron of arts and culture...
(who was the first duke of Sora of the family). 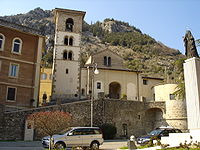 On the precipitous rock above the town (540 m) which guards the Liri's valley and the entrance to the Abruzzi are remains of polygonal walls; here, possibly, was the citadel of the original Volsci
Volsci
The Volsci were an ancient Italic people, well known in the history of the first century of the Roman Republic. They then inhabited the partly hilly, partly marshy district of the south of Latium, bounded by the Aurunci and Samnites on the south, the Hernici on the east, and stretching roughly from...
an town. There are also remains of medieval fortifications. 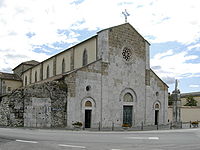 and Quintus Valerius Orca
Quintus Valerius Orca
Quintus Valerius Orca was a Roman praetor, a governor of the Roman province of Africa, and a commanding officer under Julius Caesar in the civil war against Pompeius Magnus and the senatorial elite...
; and among its later celebrities is Cardinal Baronius
Caesar Baronius
Cesare Baronio was an Italian Cardinal and ecclesiastical historian...
. The singer Anna Tatangelo
Anna Tatangelo
Anna Tatangelo is an Italian pop singer, and a judge of X Factor Italy. At the age of 15, she became the youngest person to win the Newcomer's Award at the prestigious Sanremo Music Festival singing contest. She has a romantic relationship with singer Gigi D'Alessio.-Biography:Anna Tatangelo was...
was also born in Sora. Italian Neorealist
Italian neorealism
Italian neorealism is a style of film characterized by stories set amongst the poor and working class, filmed on location, frequently using nonprofessional actors...
filmmaker Vittorio De Sica
Vittorio de Sica
Vittorio De Sica was an Italian director and actor, a leading figure in the neorealist movement....
was also born here.