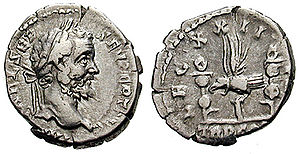 Legio XXII Primigenia was a Roman legion
Roman legion
A Roman legion normally indicates the basic ancient Roman army unit recruited specifically from Roman citizens. The organization of legions varied greatly over time but they were typically composed of perhaps 5,000 soldiers, divided into maniples and later into "cohorts"...
levied by Roman Emperor
Roman Emperor
The Roman emperor was the ruler of the Roman State during the imperial period . The Romans had no single term for the office although at any given time, a given title was associated with the emperor...
Caligula
Caligula
Caligula , also known as Gaius, was Roman Emperor from 37 AD to 41 AD. Caligula was a member of the house of rulers conventionally known as the Julio-Claudian dynasty. Caligula's father Germanicus, the nephew and adopted son of Emperor Tiberius, was a very successful general and one of Rome's most...
in 39, for his campaigns in Germania
Germania
Germania was the Greek and Roman geographical term for the geographical regions inhabited by mainly by peoples considered to be Germani. It was most often used to refer especially to the east of the Rhine and north of the Danube...
. There are still records of the XXII Primigenia in Mogontiacum (modern Mainz
Mainz
Mainz under the Holy Roman Empire, and previously was a Roman fort city which commanded the west bank of the Rhine and formed part of the northernmost frontier of the Roman Empire...
) from the end of 3rd century. The legion's symbols were a Capricorn
Capricorn
Capricorn may refer to:* Capricornus, one of the constellations of the zodiac** Capricorn * Capricorn , a manga series created by Johji Manabe* Capricorn , Jay Chou's 9th studio album...
and the demigod Hercules
Hercules
Hercules is the Roman name for Greek demigod Heracles, son of Zeus , and the mortal Alcmene...
.

XXII Primigenia was first stationed in Mogontiacum in the Roman province
Roman province
In Ancient Rome, a province was the basic, and, until the Tetrarchy , largest territorial and administrative unit of the empire's territorial possessions outside of Italy...
of Germania Superior
Germania Superior
Germania Superior , so called for the reason that it lay upstream of Germania Inferior, was a province of the Roman Empire. It comprised an area of western Switzerland, the French Jura and Alsace regions, and southwestern Germany...
, guarding the Rhine border as part of the limes
Limes
A limes was a border defense or delimiting system of Ancient Rome. It marked the boundaries of the Roman Empire.The Latin noun limes had a number of different meanings: a path or balk delimiting fields, a boundary line or marker, any road or path, any channel, such as a stream channel, or any...
. Along with the rest of the Germanic army, the legion supported Vitellius
Vitellius
Vitellius , was Roman Emperor for eight months, from 16 April to 22 December 69. Vitellius was acclaimed Emperor following the quick succession of the previous emperors Galba and Otho, in a year of civil war known as the Year of the Four Emperors...
in the Year of the four emperors
Year of the Four Emperors
The Year of the Four Emperors was a year in the history of the Roman Empire, AD 69, in which four emperors ruled in a remarkable succession. These four emperors were Galba, Otho, Vitellius, and Vespasian....
(69). During the Batavian rebellion
Batavian rebellion
The Revolt of the Batavi took place in the Roman province of Germania Inferior between 69 and 70 AD. It was an uprising against Roman rule by the Batavians and other tribes in the province and in Gaul...
, XXII Primigenia, commanded by Gaius Dillius Vocula
Gaius Dillius Vocula
Gaius Dillius Vocula was a Roman commander of the twenty-second legion Primigenia during the Batavian revolt. Defending Xanten, he was murdered by rebellious Roman troops.- External links :*...
, was the only Germanic legion that survived attacks of the rebels and stayed in its camp, defending Moguntiacum. They remained in Moguntiacum until at least the 3rd century. Later Emperor Hadrian
Hadrian
Hadrian , was Roman Emperor from 117 to 138. He is best known for building Hadrian's Wall, which marked the northern limit of Roman Britain. In Rome, he re-built the Pantheon and constructed the Temple of Venus and Roma. In addition to being emperor, Hadrian was a humanist and was philhellene in...
was tribunus militum of the XXIIth in 97-98.

The Rhine settlement was their main camp, but vexillationes of the legion participated in the building of the Antonine wall
Antonine Wall
The Antonine Wall is a stone and turf fortification built by the Romans across what is now the Central Belt of Scotland, between the Firth of Forth and the Firth of Clyde. Representing the northernmost frontier barrier of the Roman Empire, it spanned approximately 39 miles and was about ten feet ...
in Scotland (2nd century) and in the campaigns against the Sassanid Empire
Sassanid Empire
The Sassanid Empire , known to its inhabitants as Ērānshahr and Ērān in Middle Persian and resulting in the New Persian terms Iranshahr and Iran , was the last pre-Islamic Persian Empire, ruled by the Sasanian Dynasty from 224 to 651...
(around 235).

They were still in Moguntiacum during the attack of the tribe of the Alamanni
Alamanni
The Alamanni, Allemanni, or Alemanni were originally an alliance of Germanic tribes located around the upper Rhine river . One of the earliest references to them is the cognomen Alamannicus assumed by Roman Emperor Caracalla, who ruled the Roman Empire from 211 to 217 and claimed thereby to be...
in 235, and were responsible for the lynching of emperor Alexander Severus
Alexander Severus
Severus Alexander was Roman Emperor from 222 to 235. Alexander was the last emperor of the Severan dynasty. He succeeded his cousin Elagabalus upon the latter's assassination in 222, and was ultimately assassinated himself, marking the epoch event for the Crisis of the Third Century — nearly fifty...
, when he tried to negotiate with the enemy, and the subsequent election of Maximinus Thrax
Maximinus Thrax
Maximinus Thrax , also known as Maximinus I, was Roman Emperor from 235 to 238.Maximinus is described by several ancient sources, though none are contemporary except Herodian's Roman History. Maximinus was the first emperor never to set foot in Rome...
as new emperor.

In 268, Primigenia probably fought under Gallienus
Gallienus
Gallienus was Roman Emperor with his father Valerian from 253 to 260, and alone from 260 to 268. He took control of the Empire at a time when it was undergoing great crisis...
at the Battle of Naissus
Battle of Naissus
The Battle of Naissus was the defeat of a Gothic coalition by the Roman Empire under Emperor Gallienus near Naissus...
, winning a victory over the Goths
Goths
The Goths were an East Germanic tribe of Scandinavian origin whose two branches, the Visigoths and the Ostrogoths, played an important role in the fall of the Roman Empire and the emergence of Medieval Europe....
. The following year, Laelianus
Laelianus
Ulpius Cornelius Laelianus was a usurper against Postumus, the emperor of the Gallic Empire. His revolt lasted from approximately late February to early June 269.-Origins:...
, the commander of the 22nd, became emperor of the Gallic Empire
Gallic Empire
The Gallic Empire is the modern name for a breakaway realm that existed from 260 to 274. It originated during the Roman Empire's Crisis of the Third Century....
.