Encyclopedia
Slats are aerodynamic surfaces on the leading edge of the wing
Wing
A wing is an appendage with a surface that produces lift for flight or propulsion through the atmosphere, or through another gaseous or liquid fluid...
s of fixed-wing aircraft
Fixed-wing aircraft
A fixed-wing aircraft is an aircraft capable of flight using wings that generate lift due to the vehicle's forward airspeed. Fixed-wing aircraft are distinct from rotary-wing aircraft in which wings rotate about a fixed mast and ornithopters in which lift is generated by flapping wings.A powered...
which, when deployed, allow the wing to operate at a higher angle of attack
Angle of attack
Angle of attack is a term used in fluid dynamics to describe the angle between a reference line on a lifting body and the vector representing the relative motion between the lifting body and the fluid through which it is moving...
. A higher coefficient of lift is produced as a result of angle of attack and speed, so by deploying slats an aircraft can fly at slower speeds, or take off and land in shorter distances. They are usually used while landing or performing maneuvers which take the aircraft close to the stall
Stall (flight)
In fluid dynamics, a stall is a reduction in the lift coefficient generated by a foil as angle of attack increases. This occurs when the critical angle of attack of the foil is exceeded...
, but are usually retracted in normal flight to minimize drag
Drag (physics)
In fluid dynamics, drag refers to forces which act on a solid object in the direction of the relative fluid flow velocity...
. 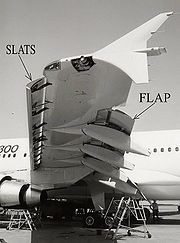 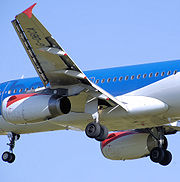 The slat has a counterpart found in the wings of some bird
Bird
Birds are feathered, winged, bipedal, endothermic , egg-laying, vertebrate animals. Around 10,000 living species and 188 families makes them the most speciose class of tetrapod vertebrates. They inhabit ecosystems across the globe, from the Arctic to the Antarctic. Extant birds range in size from...
s, the alula
Alula
The alula, or bastard wing, is a small projection on the anterior edge of the wing of modern birds. The alula is the freely moving first digit, a bird's "thumb," and is typically covered with three to five small feathers, with the exact number depending on the species...
, a feather or group of feathers which the bird can extend under control of its "thumb".

Slats were first developed by Gustav Lachmann
Gustav Lachmann
Gustav Victor Lachmann was a German aeronautical engineer who spent most of his professional life working for the British company of Handley Page....
in 1918. A crash in August 1917, with a Rumpler C aeroplane on account of stalling caused the idea to be put in a concrete form, and a small wooden model was built in 1917 in Cologne
Cologne
Cologne is Germany's fourth-largest city , and is the largest city both in the Germany Federal State of North Rhine-Westphalia and within the Rhine-Ruhr Metropolitan Area, one of the major European metropolitan areas with more than ten million inhabitants.Cologne is located on both sides of the...
. In 1918, Lachmann presented a patent for leading edge slats in Germany. However, the German patent office at first rejected it as the office did not believe in the possibility of increasing lift by dividing the wing.

Independently of Lachmann, Handley-Page Ltd in Great Britain also developed the slotted wing as a way to postpone stall by reducing the turbulence over the wing at high angles of attack, and applied for a patent in 1919; to avoid a patent challenge, they reached an ownership agreement with Lachmann. That year a De Havilland D.H.9 was fitted with slats and flown. Later a D.H.4 was modified as a monoplane with a large wing fitted with full span leading edge and back ailerons (ie what would later be called flaps) that could be deployed in conjunction with the leading edge slats to test improved low speed performance. Several years later, having subsequently taken employment at the Handley-Page aircraft company, Lachmann was responsible for a number of aircraft designs, including the Handley Page Hampden
Handley Page Hampden
The Handley Page HP.52 Hampden was a British twin-engine medium bomber of the Royal Air Force serving in the Second World War. With the Whitley and Wellington, the Hampden bore the brunt of the early bombing war over Europe, taking part in the first night raid on Berlin and the first 1,000-plane...
.

Licensing the design became one of the company's major sources of income
Income
Income is the consumption and savings opportunity gained by an entity within a specified time frame, which is generally expressed in monetary terms. However, for households and individuals, "income is the sum of all the wages, salaries, profits, interests payments, rents and other forms of earnings...
in the 1920s. The original designs were in the form of a fixed slot in the front of the wing, a design that was found on a number of STOL
STOL
STOL is an acronym for short take-off and landing, a term used to describe aircraft with very short runway requirements.-Definitions:There is no one accepted definition of STOL and many different definitions have been used by different authorities and nations at various times and for a myriad of...
aircraft.

During World War II
World War II
World War II, or the Second World War , was a global conflict lasting from 1939 to 1945, involving most of the world's nations—including all of the great powers—eventually forming two opposing military alliances: the Allies and the Axis...
German
Germany
Germany , officially the Federal Republic of Germany , is a federal parliamentary republic in Europe. The country consists of 16 states while the capital and largest city is Berlin. Germany covers an area of 357,021 km2 and has a largely temperate seasonal climate...
aircraft commonly fitted a more advanced version that pushed back flush against the wing by air pressure to reduce drag
Drag (physics)
In fluid dynamics, drag refers to forces which act on a solid object in the direction of the relative fluid flow velocity...
, popping out when the airflow decreased during slower flight. Notable slats of that time belonged to the German Fieseler Fi 156
Fieseler Fi 156
The Fieseler Fi 156 Storch was a small German liaison aircraft built by Fieseler before and during World War II, and production continued in other countries into the 1950s for the private market...
Storch. These were similar in design to retractable slats, but were fixed non-retractable slots. The slotted wing allowed this aircraft to take off into a light wind in less than 45 m (150 ft), and land in 18 m (60 ft). Aircraft designed by the Messerschmitt
Messerschmitt
Messerschmitt AG was a famous German aircraft manufacturing corporation named for its chief designer, Willy Messerschmitt, and known primarily for its World War II fighter aircraft, notably the Bf 109 and Me 262...
company employed leading-edge slats as a general rule.

Post World War II, slats have generally been operated by hydraulics
Hydraulics
Hydraulics is a topic in applied science and engineering dealing with the mechanical properties of liquids. Fluid mechanics provides the theoretical foundation for hydraulics, which focuses on the engineering uses of fluid properties. In fluid power, hydraulics is used for the generation, control,...
or electricity
Electricity
Electricity is a general term encompassing a variety of phenomena resulting from the presence and flow of electric charge. These include many easily recognizable phenomena, such as lightning, static electricity, and the flow of electrical current in an electrical wire...
.

Slats are one of several high-lift device
High-lift device
In aircraft design, high-lift devices are moving surfaces or stationary components intended to increase lift during certain flight conditions. They include common devices such as flaps and slats, as well as less common features such as leading edge extensions and blown flaps.-Purpose:Aircraft...
s used on airliner
Airliner
An airliner is a large fixed-wing aircraft for transporting passengers and cargo. Such aircraft are operated by airlines. Although the definition of an airliner can vary from country to country, an airliner is typically defined as an aircraft intended for carrying multiple passengers in commercial...
s, such as flap
Flap (aircraft)
Flaps are normally hinged surfaces mounted on the trailing edges of the wings of a fixed-wing aircraft to reduce the speed an aircraft can be safely flown at and to increase the angle of descent for landing without increasing air speed. They shorten takeoff and landing distances as well as...
systems running along the trailing edge of the wing.

Several technology research and development efforts exist to integrate the functions of flight control systems such as aileron
Aileron
Ailerons are hinged flight control surfaces attached to the trailing edge of the wing of a fixed-wing aircraft. The ailerons are used to control the aircraft in roll, which results in a change in heading due to the tilting of the lift vector...
s, elevators
Elevator (aircraft)
Elevators are flight control surfaces, usually at the rear of an aircraft, which control the aircraft's orientation by changing the pitch of the aircraft, and so also the angle of attack of the wing. In simplified terms, they make the aircraft nose-up or nose-down...
, elevon
Elevon
Elevons are aircraft control surfaces that combine the functions of the elevator and the aileron , hence the name. They are frequently used on tailless aircraft such as flying wings. An elevon that is not part of the main wing, but instead is a separate tail surface, is a stabilator...
s, flap
Flap (aircraft)
Flaps are normally hinged surfaces mounted on the trailing edges of the wings of a fixed-wing aircraft to reduce the speed an aircraft can be safely flown at and to increase the angle of descent for landing without increasing air speed. They shorten takeoff and landing distances as well as...
s, and flaperon
Flaperon
A flaperon is a type of aircraft control surface that combines aspects of both flaps and ailerons. In addition to controlling the roll or bank of an aircraft as do conventional ailerons, both flaperons can be lowered together to function similarly to a dedicated set of flaps...
s into wings to perform the aerodynamic purpose with the advantages of less: mass, cost, drag, inertia
Inertia
Inertia is the resistance of any physical object to a change in its state of motion or rest, or the tendency of an object to resist any change in its motion. It is proportional to an object's mass. The principle of inertia is one of the fundamental principles of classical physics which are used to...
(for faster, stronger control response), complexity (mechanically simpler, fewer moving parts or surfaces, less maintenance), and radar cross section
Radar cross section
Radar cross section is a measure of how detectable an object is with a radar. A larger RCS indicates that an object is more easily detected.An object reflects a limited amount of radar energy...
for stealth
Stealth technology
Stealth technology also termed LO technology is a sub-discipline of military tactics and passive electronic countermeasures, which cover a range of techniques used with personnel, aircraft, ships, submarines, and missiles, to make them less visible to radar, infrared, sonar and other detection...
. These may be used in many unmanned aerial vehicle
Unmanned aerial vehicle
An unmanned aerial vehicle , also known as a unmanned aircraft system , remotely piloted aircraft or unmanned aircraft, is a machine which functions either by the remote control of a navigator or pilot or autonomously, that is, as a self-directing entity...
s (UAVs) and 6th generation fighter aircraft
Fighter aircraft
A fighter aircraft is a military aircraft designed primarily for air-to-air combat with other aircraft, as opposed to a bomber, which is designed primarily to attack ground targets...
. One promising approach that could rival slats are flexible wings.