Encyclopedia
A leading edge slot is an aerodynamic
Aerodynamics
Aerodynamics is a branch of dynamics concerned with studying the motion of air, particularly when it interacts with a moving object. Aerodynamics is a subfield of fluid dynamics and gas dynamics, with much theory shared between them. Aerodynamics is often used synonymously with gas dynamics, with...
feature of the wing of some aircraft to reduce the stall speed
Stall (flight)
In fluid dynamics, a stall is a reduction in the lift coefficient generated by a foil as angle of attack increases. This occurs when the critical angle of attack of the foil is exceeded...
and promote good low-speed handling qualities. A leading edge slot is a span-wise gap in each wing, allowing air to flow from below the wing to its upper surface. In this manner they allow flight at higher angles of attack
Angle of attack
Angle of attack is a term used in fluid dynamics to describe the angle between a reference line on a lifting body and the vector representing the relative motion between the lifting body and the fluid through which it is moving...
and thus reduce the stall speed.

15° is a typical angle of attack at the stall of a basic airfoil
Airfoil
An airfoil or aerofoil is the shape of a wing or blade or sail as seen in cross-section....
. Modification of such an airfoil by use of a leading edge slot could increase the stalling angle to 22° to 25°.

Slots were first developed by Handley-Page in 1919, and the first aircraft to fly with them was the experimental H.P.17 - a modified Airco DH.9A
Airco DH.9A
The Airco DH.9A was a British light bomber designed and first used shortly before the end of the First World War. Colloquially known as the "Ninak" , it served on in large numbers for the Royal Air Force following the end of the war, both at home and overseas, where it was used for colonial...
. The first aircraft fitted with controllable slots was the Handley Page H.P.20. Licensing the design became one of Handley-Page’s major sources of income in the 1920s.

Similar, but retractable, leading edge devices are called slats
Leading edge slats
Slats are aerodynamic surfaces on the leading edge of the wings of fixed-wing aircraft which, when deployed, allow the wing to operate at a higher angle of attack. A higher coefficient of lift is produced as a result of angle of attack and speed, so by deploying slats an aircraft can fly at slower...
. When the slat opens, it creates a slot between the slat and the remainder of the wing.

Unlike trailing edge flaps
Flap (aircraft)
Flaps are normally hinged surfaces mounted on the trailing edges of the wings of a fixed-wing aircraft to reduce the speed an aircraft can be safely flown at and to increase the angle of descent for landing without increasing air speed. They shorten takeoff and landing distances as well as...
, leading edge slots do not increase the lift coefficient at zero angle of attack.

A leading edge slot is a fixed (non-closing) gap behind the wing’s leading edge
Leading edge
The leading edge is the part of the wing that first contacts the air; alternatively it is the foremost edge of an airfoil section. The first is an aerodynamic definition, the second a structural one....
. Air from below the wing can accelerate through the slot towards the low pressure region above the wing, and exit from the slot moving parallel to the upper wing surface. This high-speed flow then mixes with the boundary layer
Boundary layer
In physics and fluid mechanics, a boundary layer is that layer of fluid in the immediate vicinity of a bounding surface where effects of viscosity of the fluid are considered in detail. In the Earth's atmosphere, the planetary boundary layer is the air layer near the ground affected by diurnal...
attached to the upper surface and delays boundary layer separation from the upper surface. 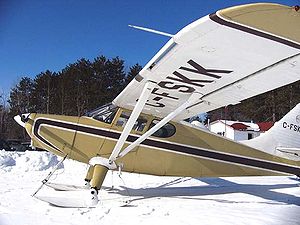 One way to reduce the cruise drag of slots is to make them able to be closed. This arrangement is known as leading edge slats
Leading edge slats
Slats are aerodynamic surfaces on the leading edge of the wings of fixed-wing aircraft which, when deployed, allow the wing to operate at a higher angle of attack. A higher coefficient of lift is produced as a result of angle of attack and speed, so by deploying slats an aircraft can fly at slower...
. Aerodynamically, slats work in the same way as fixed slots but slats can be retracted at higher speeds when they are not needed. Slats, in turn, are heavier and more complex than slots.

At low angles of attack the airflow through the slot is insignificant, although it contributes to drag
Drag (physics)
In fluid dynamics, drag refers to forces which act on a solid object in the direction of the relative fluid flow velocity...
. At progressively higher angles of attack, the flow of air through the slot becomes increasingly significant, accelerating from the higher pressure region below the wing to the lower pressure region on top of the wing. At high angles of attack the fastest airspeed relative to the airfoil is very close to the leading edge, on the upper surface. In this region of high local airspeed, skin friction (viscous force
Viscosity
Viscosity is a measure of the resistance of a fluid which is being deformed by either shear or tensile stress. In everyday terms , viscosity is "thickness" or "internal friction". Thus, water is "thin", having a lower viscosity, while honey is "thick", having a higher viscosity...
) is very high and the boundary layer arriving at the slot on the upper wing has lost much of its total pressure (or total mechanical energy
Mechanical energy
In physics, mechanical energy is the sum of potential energy and kinetic energy present in the components of a mechanical system. It is the energy associated with the motion and position of an object. The law of conservation of energy states that in an isolated system that is only subject to...
) due to this friction. In contrast, the air passing through the slot has not experienced this high local airspeed or high skin friction, and its total pressure remains close to the free-stream value. The mixing of the upper surface boundary layer with air arriving through the slot re-energises the boundary layer which then remains attached to the upper surface of the wing to a higher angle of attack than if the slot were not there. The leading edge slot was therefore one of the earliest forms of boundary layer control
Boundary layer control
Boundary layer control refers to methods of controlling the behaviour of fluid flow boundary layers. This holds particular interest in aeronautical engineering because drag may be reduced whilst achieving high lift ....
.

Full-span slots are generally found on Short Take-off and Landing STOL
STOL
STOL is an acronym for short take-off and landing, a term used to describe aircraft with very short runway requirements.-Definitions:There is no one accepted definition of STOL and many different definitions have been used by different authorities and nations at various times and for a myriad of...
aircraft like the Fieseler Storch, Dornier Do 27
Dornier Do 27
-See also:-Bibliography:*Green, William. Macdonald Aircraft Handbook. London. Macdonald & Co. Ltd., 1964.*Jackson, Paul A. German Military Aviation 1956-1976. Hinckley, Leicestershire, UK: Midland Counties Publications, 1976. ISBN 0-904597-03-2.-External links:**...
, PZL-104M Wilga 2000, and Zenair CH 701 STOL. Their primary purpose is to allow the aircraft to fly at a higher angle of attack before reaching the stalling angle.

In aircraft other than specialist STOL aircraft, full-span slots have serious drawbacks because, to take advantage of the high angle of attack at the stall, they usually necessitate long undercarriage legs that either cause high drag or are longer than can be accommodated easily inside the airframe.

Partial-span slots are usually found only on the outboard portion of the wing where they ensure airflow over that portion of the wing will remain unstalled at higher angles of attack than the inboard portions of the wing. This ensures the wing root stalls first and contributes to docile stall behaviour and maintaining aileron control throughout the stall. Using slots in this manner produces a similar result to employing washout
Washout (aviation)
Washout refers to a feature of wing design to deliberately reduce the lift distribution across the span of the wing of an aircraft. The wing is designed so that angle of incidence is higher at the wing roots and decreases across the span, becoming lowest at the wing tip...
on a wing, but through a different means. Examples of aircraft with partial-span, fixed slots are the Stinson 108
Stinson 108
-See also:-References:...
, Bristol Beaufort
Bristol Beaufort
The Bristol Beaufort was a British twin-engined torpedo bomber designed by the Bristol Aeroplane Company, and developed from experience gained designing and building the earlier Blenheim light bomber....
, and Dornier Do 28D-2 Skyservant
Dornier Do 28
The Dornier Do 28 Skyservant is a twin-engine STOL utility aircraft, manufactured by Dornier Flugzeugbau GmbH. It served with the Luftwaffe and Marineflieger and other air forces around the world in the communications and utility role....
.