Encyclopedia
Puri is district headquarter, a city situated about 60 kilometres (37 mi) south of state capital Bhubaneswar
Bhubaneswar
Bhubaneswar is the capital of the Indian state of Orissa, officially Odisha. The city has a long history of over 2000 years starting with Chedi dynasty who had Sisupalgarh near present-day Bhubaneswar as their capital...
, on the eastern coast of the Bay of Bengal
Bay of Bengal
The Bay of Bengal , the largest bay in the world, forms the northeastern part of the Indian Ocean. It resembles a triangle in shape, and is bordered mostly by the Eastern Coast of India, southern coast of Bangladesh and Sri Lanka to the west and Burma and the Andaman and Nicobar Islands to the...
in the India
India
India , officially the Republic of India , is a country in South Asia. It is the seventh-largest country by geographical area, the second-most populous country with over 1.2 billion people, and the most populous democracy in the world...
n state of Orissa
Orissa
Orissa , officially Odisha since Nov 2011, is a state of India, located on the east coast of India, by the Bay of Bengal. It is the modern name of the ancient nation of Kalinga, which was invaded by the Maurya Emperor Ashoka in 261 BC. The modern state of Orissa was established on 1 April...
. It is also known as Jagannath Puri after the Jagannath Temple
Jagannath Temple (Puri)
The Jagannath Temple in Puri is a famous Hindu temple dedicated to Jagannath and located in the coastal town of Puri in the state of Orissa, India. The name Jagannath is a combination of the Sanskrit words Jagat and Nath...
(built in the late eleventh century). It is a holy city of the Hindus as a part of the Char Dham
Char Dham
The Chota Char Dham , is an important Hindu pilgrimage circuit in the Indian Himalayas...
pilgrimages. It is considered that a pilgrimage of the temples of India is not complete without making the journey to Puri.

Puri also has one of the best beaches for swimming in India and is also a popular beach resort, positioned in a unique place so that both sunset and sunrise can be viewed from the beach
Puri Beach
Puri Beach is a beach in the city of Puri in the state of Orissa, India. It is on the shore of the Bay of Bengal. It is known for being a tourist attraction and a Hindu sacred place...
.

Puri, the holy land of Lord Jagannath, has many names. It is mentioned in Puranas as Srikshetra, Shankhakshetra, Neelāchala, Neelādri, Purusottama Dhāma, Purusottama Kshetra, Purusottama Puri and Jagannath Puri. The word "Puri" in Sanskrit
Sanskrit
Sanskrit , is a historical Indo-Aryan language and the primary liturgical language of Hinduism, Jainism and Buddhism.Buddhism: besides Pali, see Buddhist Hybrid Sanskrit Today, it is listed as one of the 22 scheduled languages of India and is an official language of the state of Uttarakhand...
means 'town', or 'city' and is cognate with polis in Greek. It is possible that Puri is a shortened name for Jagannath Puri or Purusottama Puri. In some records pertaining to the British rule, the word 'Jagannath' was used for Puri. It is the only shrine in India, where Radha
Radha
Radha , also called Radhika, Radharani and Radhikarani, is the childhood friend and lover of Krishna in the Bhagavata Purana, and the Gita Govinda of the Vaisnava traditions of Hinduism...
, along with Lakshmi
Lakshmi
Lakshmi or Lakumi is the Hindu goddess of wealth, prosperity , light, wisdom, fortune, fertility, generosity and courage; and the embodiment of beauty, grace and charm. Representations of Lakshmi are also found in Jain monuments...
, Durga
Durga
For the 1985 Hindi Film of Rajesh Khanna see DurgaaIn Hinduism, Durga ; ; meaning "the inaccessible" or "the invincible"; , durga) or Maa Durga "one who can redeem in situations of utmost distress" is a form of Devi, the supremely radiant goddess, depicted as having eighteen arms, riding a lion...
, Sati, Parvati
Parvati
Parvati is a Hindu goddess. Parvati is Shakti, the wife of Shiva and the gentle aspect of Mahadevi, the Great Goddess...
, and Shakti
Shakti
Shakti from Sanskrit shak - "to be able," meaning sacred force or empowerment, is the primordial cosmic energy and represents the dynamic forces that are thought to move through the entire universe in Hinduism. Shakti is the concept, or personification, of divine feminine creative power, sometimes...
abodes with Krishna
Krishna
Krishna is a central figure of Hinduism and is traditionally attributed the authorship of the Bhagavad Gita. He is the supreme Being and considered in some monotheistic traditions as an Avatar of Vishnu...
, also known as Jagannath
Jagannath
Jagannath is a transcendental non-anthropotheistic Hindu god worshiped primarily by the people of Indian state of Orissa, and, to a great extent, West Bengal...
. 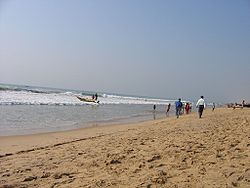 Puri is the site of the Govardhana matha
Govardhana matha
The Govardhana matha is located in the city of Puri in Orissa state , and is associated with the Jagannath temple. It is one of those four cardinal mathas said to have been founded by Adi Shankara, and is the eastern matha. As per the tradition initiated by Adi Shankara, it is in charge of the Rig...
, one of the four cardinal institutions established by Adi Shankaracharya, the others being those at Sringeri, Dwaraka
Dwarka
Dwarka also spelled Dvarka, Dwaraka, and Dvaraka, is a city and a municipality of Jamnagar district in the Gujarat state in India. Dwarka , also known as Dwarawati in Sanskrit literature is rated as one of the seven most ancient cities in the country...
and Jyotirmath
Jyotirmath
Jyotirmath , also called Jyotir Math and Joshimath , is a city and a municipal board in Chamoli District in the Indian state of Uttarakhand. It is home to one of the four cardinal pīthas established by Adi Shankara.-Demographics:...
.

Puri is also famous for its annual Ratha Yatra, or "Festival of Chariots
Temple car
Temple cars are chariots used to carry representations of Hindu gods. The car is usually used on festival days, when many people pull the cart....
", when the deities Jagannath
Jagannath
Jagannath is a transcendental non-anthropotheistic Hindu god worshiped primarily by the people of Indian state of Orissa, and, to a great extent, West Bengal...
, Balabhadra, and Subhadra
Subhadra
Image:Jagannath, Baladev and Subadra in Radhadesh.jpg|thumb|right|250px|alt=|Subhadra, flanked by her brothers Balarama and Jagannatha . Deities of the Radhadesh temple in Belgium...
, are brought out of the temple, and placed in a chariot procession. This festival occurs on various dates of the Gregorian calendar, typically in the month of July.

The town is famous for its many Mathas (Monasteries of the various Hindu sects). It also houses the relics of many Hindu figures as traditionally it is seen as a holy place to die in or to be cremated. As a result, it has had a disproportionate number of widows. Like other old Hindu religious towns it has a lot of character that is difficult to be glimpsed or picked up on easily by a casual visitor. 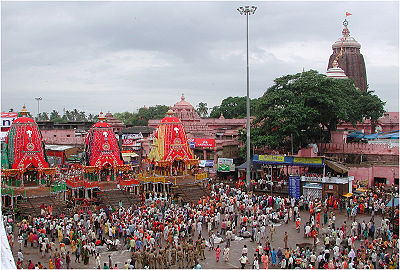 Culture and Tradition of Puri

Puri is one of the fascinating littoral district of Orissa. The Cultural heritage of Puri with its long recorded history beginning from third century B. C till present day, The monuments and religious sanctity, way of life of the people with their rich tradition possess emphatically to be the cultural heart of Orissa. In deed Puri is considered cultural capital of Orissa. The culture here is flourished with its manifold activities.

The District has the happy conglomerate of different religions, sects and faith in course of history, Hindu, Buddhist, Jaina, Muslim, Christian, Sikh found here in the District.

Sri Chaitanya Mahaprabhu
Chaitanya Mahaprabhu
Chaitanya Mahaprabhu was a Vaishnava saint and social reformer in eastern India in the 16th century, believed by followers of Gaudiya Vaishnavism to be the full incarnation of Lord Krishna...
, an incarnation of Lord Krishna, appeared 500 (five hundred) years ago, in the mood of a devotee to taste the sublime emotions of ecstacy by chanting the holy name of Krishna. Stalwart scholars of Puri like Sarvabhauma Bhattacharya (head priest and great Sanskrit pandit) and others followed His teachings. Even kings and ministers of His period became His disciples. One famous King, Prataparudra, became His great admirer and ardent follower.

The festivals are celebrated in a calendar year relating to Lord Jagannath are:

Other Festivals for Tourists


In all the festivals Odissidance folk dances from different party of the country are staged.

CULTURAL PROGRAM ON SECOND SATURDAY OF EVERY MONTH:

With the objective to encourage the young artist and to display our rich performing art form, Cultural programmee for two hours, in the evening of 2nd Saturday of each month is organized at the collector's conference Hall C (Near Sea bech Police Station) Puri by District Council of culture. The majestic Odissi dance, the lucid Odissi Song and enchanting folk dances are staged in this programmes.

Puri is also famous for its 'Sahi Jatras' which represent the spirit of 'Sahis' (Sahi: Geographical barriers based on occupation)
Every year, strong young men dresees as mythological characters like Ravaan, Durga Madhab, Naga Sanyassi go around the town after seeking blessings from the Shri Jagannath Temple.

The important monuments of the District are:


The grandeur of architecture and the crafts maintop of the sculptures speak high of the cultural history of Puri District.

The following are the Excavated archeological Sites of Puri District.

Theatre
Anna Purna Theatre, situated at the grand road Puri, is a pioneer institution in the field of theatrical performances.

Opera is a popular mobile drama troupe is very popular in the state. 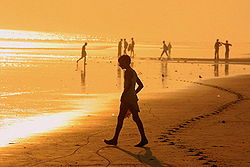 India census
Census
A census is the procedure of systematically acquiring and recording information about the members of a given population. It is a regularly occurring and official count of a particular population. The term is used mostly in connection with national population and housing censuses; other common...
, Puri had a population of 157,610. Males constitute 52% of the population and females 48%. Puri has an average literacy rate of 75%, higher than the national average of 59.5%: male literacy is 80%, and female literacy is 70%. In Puri, 10% of the population is under 6 years of age.

Puri has a very long, broad sand beach. The sea produces very big waves here. It attracts many national and international tourists because of its beautiful long beach and world famous Jagannath Temple
Jagannath Temple (Puri)
The Jagannath Temple in Puri is a famous Hindu temple dedicated to Jagannath and located in the coastal town of Puri in the state of Orissa, India. The name Jagannath is a combination of the Sanskrit words Jagat and Nath...
The place to start a pilgrimage is here and Puri is a pilgrim's destination too. There are many ashrams and sacred temples in Puri.

Current MLA from Puri Assembly Constituency is Maheswar Mohanty of BJD
Biju Janata Dal
The Biju Janata Dal is a state political party of the Indian state of Orissa led by Naveen Patnaik, son of former state chief minister Biju Patnaik. It was founded on 27 December 1997.-History:...
, who won the seat in State elections in 2009. He won this seat for BJD in 2000 and 2004 and representing JD
Janata Dal
Janata Dal is an Indian political party which was formed through the merger of Janata Party factions, the Lok Dal, Congress, and the Jan Morcha led by V. P...
in 1995. Other previous MLAs from this seat were Braja Kishor Tripathy who won this seat representing JD in 1990, representing JNP in 1985 and 1977, Gadadhar Mishra of INC(I) in 1980.Mr Uma Ballav Rath also became the MLA in 1991 in a Bi election as a JD candidate.