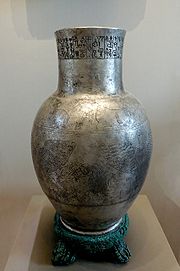 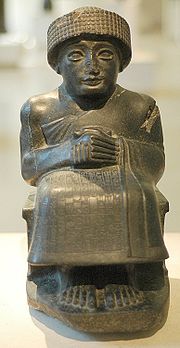 From inscriptions found at Girsu such as the Gudea cylinders
Gudea cylinders
The Gudea cylinders are a pair of terracotta cylinders dating to circa 2125 BC, on which is written in cuneiform a Sumerian myth called the Building of Ningursu's temple. The cylinders were found in 1877 during excavations at Telloh , Iraq and are now displayed in the Louvre in Paris, France...
, it appears that Lagash was an important Sumer
Sumer
Sumer was a civilization and historical region in southern Mesopotamia, modern Iraq during the Chalcolithic and Early Bronze Age....
ian city in the late 3rd millennium BC. It was at that time ruled by independent kings, Ur-Nanshe
Ur-Nanshe
Ur-Nanshe was the first king of the dynasty of Lagash, probably in the first half of the 24th century BC .He ascended after Lugal-Sha-Gen-Sur , who was the ensi, or high priest....
(24th century BC) and his successors, who were engaged in contests with the Elam
Elam
Elam was an ancient civilization located in what is now southwest Iran. Elam was centered in the far west and the southwest of modern-day Iran, stretching from the lowlands of Khuzestan and Ilam Province, as well as a small part of southern Iraq...
ites on the east and the kings of "Kienĝir" and Kish
Kish (Sumer)
Kish is modern Tell al-Uhaymir , and was an ancient city of Sumer. Kish is located some 12 km east of Babylon, and 80 km south of Baghdad ....
on the north. Some of the earlier works from before the Akkadian conquest are also extremely interesting, in particular Eannatum's Stele of the Vultures and Entemena's great silver vase ornamented with Ningirsu's sacred animal Anzu
Zu (mythology)
Zu, also known as Anzu and Imdugud, in Persian and Sumerian, is a lesser divinity of Akkadian mythology, and the son of the bird goddess Siris. He is also said to be conceived by the pure waters of the Apsu-gods and the wide Earth...
: a lion-headed eagle with wings outspread, grasping a lion in each talon. With the Akkad
Akkad
The Akkadian Empire was an empire centered in the city of Akkad and its surrounding region in Mesopotamia....
ian conquest Lagash lost its independence, its ruler or ensi becoming a vassal of Sargon of Akkad
Sargon of Akkad
Sargon of Akkad, also known as Sargon the Great "the Great King" , was an Akkadian emperor famous for his conquest of the Sumerian city-states in the 23rd and 22nd centuries BC. The founder of the Dynasty of Akkad, Sargon reigned in the last quarter of the third millennium BC...
and his successors; but Lagash continued to be a city of much importance and above all, a centre of artistic development.

After the collapse of Sargon's state, Lagash again thrived under its independent kings (ensis), Ur-Bau and Gudea
Gudea
Gudea was a ruler of the state of Lagash in Southern Mesopotamia who ruled ca. 2144 - 2124 BC. He probably did not come from the city, but had married Ninalla, daughter of the ruler Urbaba of Lagash, thus gaining entrance to the royal house of Lagash...
, and had extensive commercial communications with distant realms. According to his own records, Gudea brought cedars from the Amanus and Lebanon
Lebanon
Lebanon , officially the Republic of LebanonRepublic of Lebanon is the most common term used by Lebanese government agencies. The term Lebanese Republic, a literal translation of the official Arabic and French names that is not used in today's world. Arabic is the most common language spoken among...
mountains in Syria
Syria
Syria , officially the Syrian Arab Republic , is a country in Western Asia, bordering Lebanon and the Mediterranean Sea to the West, Turkey to the north, Iraq to the east, Jordan to the south, and Israel to the southwest....
, diorite
Diorite
Diorite is a grey to dark grey intermediate intrusive igneous rock composed principally of plagioclase feldspar , biotite, hornblende, and/or pyroxene. It may contain small amounts of quartz, microcline and olivine. Zircon, apatite, sphene, magnetite, ilmenite and sulfides occur as accessory...
from eastern Arabia, copper and gold from central and southern Arabia, while his armies were engaged in battles with Elam
Elam
Elam was an ancient civilization located in what is now southwest Iran. Elam was centered in the far west and the southwest of modern-day Iran, stretching from the lowlands of Khuzestan and Ilam Province, as well as a small part of southern Iraq...
on the east. His was especially the era of artistic development. We even have a fairly good idea of what Gudea looked like, since he placed in temples throughout his city numerous statues or idols depicting himself with lifelike realism, (Statues of Gudea
Statues of Gudea
Twenty-seven statues of Gudea have been found so far . A-K were found during Ernest de Sarzec's excavations in the court of the palace of Adad-nadin-ahhe in Telloh . Statues M-Q come from clandestine excavations in Telloh in 1924; the rest come from the art trade, with unknown provenances and...
). At the time of Gudea, the capital of Lagash was actually in Girsu. The kingdom covered an area of approximately 1600 square kilometres (617.8 sq mi). It contained 17 larger cities, eight district capitals, and numerous villages (about 40 known by name). According to one estimate, Lagash was the largest city in the world from ca. 2075 to 2030 BC.

Soon after the time of Gudea, Lagash was absorbed into the Ur III state as one of its prime provinces. There is some information about the area during the Old Babylonian period. After that it seems to have lost its importance; at least we know nothing more about it until the construction of the Seleucid fortress mentioned, when it seems to have become part of the Greek kingdom of Characene
Characene
Characene, also known as Mesene , was a kingdom within the Parthian Empire at the head of the Persian Gulf. Its capital was Charax Spasinou, "The Fort of Hyspaosines"...
.

These dynasties are not found on the Sumerian King List
Sumerian king list
The Sumerian King List is an ancient manuscript originally recorded in the Sumerian language, listing kings of Sumer from Sumerian and neighboring dynasties, their supposed reign lengths, and the locations of "official" kingship...
, although one extremely fragmentary supplement has been found in Sumerian, known as the rulers of Lagash. It recounts how after the flood mankind was having difficulty growing food for itself, being dependent solely on rainwater; it further relates that techniques of irrigation and cultivation of barley were then imparted by the gods. At the end of the list is the statement "Written in the school", suggesting this was a scribal
Scribe
A scribe is a person who writes books or documents by hand as a profession and helps the city keep track of its records. The profession, previously found in all literate cultures in some form, lost most of its importance and status with the advent of printing...
school production. A few of the names from the Lagash rulers listed below may be made out, including Ur-Nanshe, "Ane-tum", En-entar-zid, Ur-Ningirsu, Ur-Bau, and Gudea.

Lagash is one of the largest archaeological mounds in the region, measuring roughly 2 by. Estimates of its area range from 400 to 600 ha (988.4 to 1,482.6 ). The site is divided by the bed of a canal/river, which runs diagonally through the mound. The site was first excavated, for six weeks, by Robert Koldewey
Robert Koldewey
Robert Johann Koldewey was a German architect, famous for his discovery of the ancient city of Babylon in modern day Iraq. He was born in Blankenburg am Harz in Germany, the duchy of Brunswick, and died in Berlin at the age of 70...
in 1887. It was inspected during a survey of the area by Thorkild Jacobsen
Thorkild Jacobsen
Thorkild Jacobsen was a renowned historian specializing in Assyriology and Sumerian literature.He was one of the foremost scholars on the ancient Near East.-Biography:...
and Fuad Safar in 1953, finding the first evidence of its identification as Lagash. The major polity in the region of al-Hiba and Tello had formerly been identified as ŠIR.BUR.LA (Shirpurla). Tell Al-Hiba was again explored in five seasons of excavation between 1968 and 1976 by a team from the Metropolitan Museum of Art
Metropolitan Museum of Art
The Metropolitan Museum of Art is a renowned art museum in New York City. Its permanent collection contains more than two million works, divided into nineteen curatorial departments. The main building, located on the eastern edge of Central Park along Manhattan's Museum Mile, is one of the...
and the Institute of Fine Arts of New York University
New York University
New York University is a private, nonsectarian research university based in New York City. NYU's main campus is situated in the Greenwich Village section of Manhattan...
. The team was led by Vaughn E. Crawford, and included Donald P. Hansen and Robert D. Biggs. The primary focus was the excavation of the temple Ibgal
GAL (cuneiform)
GAL is the Sumerian cuneiform for "great".*LÚ.GAL*DEREŠ.KI.GAL...
of Inanna
Inanna
Inanna, also spelled Inana is the Sumerian goddess of sexual love, fertility, and warfare....
and the temple Bagara of Ningirsu, as well as an associated administrative area.

The team returned 12 years later in 1990 for a final season of excavation led by D. P. Hansen. The work primarily involved areas adjacent to an as yet
unexcavated temple. The results of this season have apparently not yet been published.