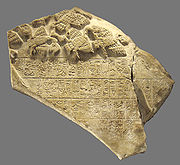 Eannatum was a Sumer
Sumer
Sumer was a civilization and historical region in southern Mesopotamia, modern Iraq during the Chalcolithic and Early Bronze Age....
ian king of Lagash
Lagash
Lagash is located northwest of the junction of the Euphrates and Tigris rivers and east of Uruk, about east of the modern town of Ash Shatrah. Lagash was one of the oldest cities of the Ancient Near East...
who established one of the first verifiable empires in history. One inscription of his, found on a boulder, states that Eannatum was his Sumerian name, while his "Tidnu" (Syrian?) name was Lumma.

Eannatum, grandson of Ur-Nanshe
Ur-Nanshe
Ur-Nanshe was the first king of the dynasty of Lagash, probably in the first half of the 24th century BC .He ascended after Lugal-Sha-Gen-Sur , who was the ensi, or high priest....
, was a king of Lagash who conquered all of Sumer, including Ur
Ur
Ur was an important city-state in ancient Sumer located at the site of modern Tell el-Muqayyar in Iraq's Dhi Qar Governorate...
, Nippur
Nippur
Nippur was one of the most ancient of all the Sumerian cities. It was the special seat of the worship of the Sumerian god Enlil, the "Lord Wind," ruler of the cosmos subject to An alone...
, Akshak
Akshak
Akshak was a city of ancient Sumer, situated on the northern boundary of Akkad, sometimes identified with Babylonian Upi . Its exact location is uncertain. Classicalwriters located it where the Tigris and Euphrates rivers...
(controlled by Zuzu), Larsa
Larsa
Larsa was an important city of ancient Sumer, the center of the cult of the sun god Utu. It lies some 25 km southeast of Uruk in Iraq's Dhi Qar Governorate, near the east bank of the Shatt-en-Nil canal at the site of the modern settlement Tell as-Senkereh or Sankarah.-History:According to...
, and Uruk
Uruk
Uruk was an ancient city of Sumer and later Babylonia, situated east of the present bed of the Euphrates river, on the ancient dry former channel of the Euphrates River, some 30 km east of modern As-Samawah, Al-Muthannā, Iraq.Uruk gave its name to the Uruk...
(controlled by Enshakushanna
Enshakushanna
Enshakushanna was a king of Uruk in the later 3rd millennium BC who is named on the Sumerian king list, which states his reign to have been 60 years. He conquered Hamazi, Akkad, Kish, and Nippur, claiming hegemony over all of Sumer...
, who is on the King List
Sumerian king list
The Sumerian King List is an ancient manuscript originally recorded in the Sumerian language, listing kings of Sumer from Sumerian and neighboring dynasties, their supposed reign lengths, and the locations of "official" kingship...
). He also annexed the kingdom of Kish
Kish (Sumer)
Kish is modern Tell al-Uhaymir , and was an ancient city of Sumer. Kish is located some 12 km east of Babylon, and 80 km south of Baghdad ....
, which regained its independence after his death. He made Umma
Umma
Umma was an ancient city in Sumer. Note that there is some scholarly debateabout the Sumerian and Akkadian names for this site.-History:...
a tributary, where every person had to pay a certain amount of grain into the treasury of the goddess Nina and the god Ingurisa after personally commanding an army to subjugate the city.

Eannatum expanded his influence beyond the boundaries of Sumer. He conquered parts of Elam
Elam
Elam was an ancient civilization located in what is now southwest Iran. Elam was centered in the far west and the southwest of modern-day Iran, stretching from the lowlands of Khuzestan and Ilam Province, as well as a small part of southern Iraq...
, including the city Az on the Persian Gulf
Persian Gulf
The Persian Gulf, in Southwest Asia, is an extension of the Indian Ocean located between Iran and the Arabian Peninsula.The Persian Gulf was the focus of the 1980–1988 Iran-Iraq War, in which each side attacked the other's oil tankers...
, allegedly smote Shubur
Subartu
The land of Subartu or Subar is mentioned in Bronze Age literature...
, and demanded tribute as far as Mari
Mari, Syria
Mari was an ancient Sumerian and Amorite city, located 11 kilometers north-west of the modern town of Abu Kamal on the western bank of Euphrates river, some 120 km southeast of Deir ez-Zor, Syria...
. However, often parts of his empire were revolting. During Eannatum’s reign, many temples and palaces were built, especially in Lagash. The city of Nina, probably a precursor of Niniveh, was rebuilt, with many canals and reservoirs being excavated.


Stele of the Vultures

The so-called Stele of the Vultures, now in the Louvre, is a fragmented limestone stele
Stele
A stele , also stela , is a stone or wooden slab, generally taller than it is wide, erected for funerals or commemorative purposes, most usually decorated with the names and titles of the deceased or living — inscribed, carved in relief , or painted onto the slab...
found in Telloh, (ancient Girsu) Iraq
Iraq
Iraq ; officially the Republic of Iraq is a country in Western Asia spanning most of the northwestern end of the Zagros mountain range, the eastern part of the Syrian Desert and the northern part of the Arabian Desert....
, in 1881. The stele is reconstructed as having been 1.8 metres (5.9 ft) high and 1.3 metres (4.3 ft) wide and was set up ca. 2500–2400 BCE. It was erected as a monument of the victory of Eannatum of Lagash over Enakalle of Umma
Umma
Umma was an ancient city in Sumer. Note that there is some scholarly debateabout the Sumerian and Akkadian names for this site.-History:...
.

On it various incidents in the war are represented. In one register, the king stands in his chariot with a curved weapon in his right hand, formed of three bars of metal bound together by rings, while his kilted followers, with helmets on their heads and lances in their hands, march behind him. In another register a figure, presumed to be that of the king, rides on his chariot in the thick of the battle. On the other side of the stele is an image of Ninurta
Ninurta
Ninurta in Sumerian and Akkadian mythology was the god of Lagash, identified with Ningirsu with whom he may always have been identical...
, a god of war, holding the captive Ummaites in a large net. This implies that Eannatum attributed his victory to Ninurta, and thus that he was in the god's protection (though some accounts say that he attributed his victory to Enlil
Enlil
Elizabeth Barrett Browning was one of the most prominent poets of the Victorian era. Her poetry was widely popular in both England and the United States during her lifetime. A collection of her last poems was published by her husband, Robert Browning, shortly after her death.-Early life:Members...
, the patron deity of Lagash).
The source of this article is wikipedia, the free encyclopedia.  The text of this article is licensed under the GFDL.