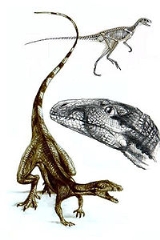 Encyclopedia
The Ladinian is a stage and age in the Middle Triassic
Middle Triassic
In the geologic timescale, the Middle Triassic is the second of three epochs of the Triassic period or the middle of three series in which the Triassic system is divided. It spans the time between 245 ± 1.5 Ma and 228 ± 2 Ma...
series
Series (stratigraphy)
Series are subdivisions of rock layers made based on the age of the rock and corresponding to the dating system unit called an epoch, both being formally defined international conventions of the geological timescale. A series is therefore a sequence of rock depositions defining a...
or epoch
Epoch (geology)
An epoch is a subdivision of the geologic timescale based on rock layering. In order, the higher subdivisions are periods, eras and eons. We are currently living in the Holocene epoch...
. It spans the time between 237 ± 2 Ma and 228 ± 2 Ma (million years ago). The Ladinian was preceded by the Anisian
Anisian
In the geologic timescale, the Anisian is the lower stage or earliest age of the Middle Triassic series or epoch and lasted from 245 million years ago until 237 million years ago, approximately...
and succeeded by the Carnian
Carnian
The Carnian is the lowermost stage of the Upper Triassic series . It lasted from about 228.7 till 216.5 million years ago . The Carnian is preceded by the Ladinian and is followed by the Norian...
(part of the Upper or Late Triassic
Late Triassic
The Late Triassic is in the geologic timescale the third and final of three epochs of the Triassic period. The corresponding series is known as the Upper Triassic. In the past it was sometimes called the Keuper, after a German lithostratigraphic group that has a roughly corresponding age...
).

The Ladinian is coeval with the Falangian Chinese
China
Chinese civilization may refer to:* China for more general discussion of the country.* Chinese culture* Greater China, the transnational community of ethnic Chinese.* History of China* Sinosphere, the area historically affected by Chinese culture...
regional stage.

The Ladinian was established by Austrian geologist Alexander Bittner in 1892. Its name comes from the Ladin people that live in the Italian
Italy
Italy , officially the Italian Republic languages]] under the European Charter for Regional or Minority Languages. In each of these, Italy's official name is as follows:;;;;;;;;), is a unitary parliamentary republic in South-Central Europe. To the north it borders France, Switzerland, Austria and...
Alps
Alps
The Alps is one of the great mountain range systems of Europe, stretching from Austria and Slovenia in the east through Italy, Switzerland, Liechtenstein and Germany to France in the west....
(in the Dolomites
Dolomites
The Dolomites are a mountain range located in north-eastern Italy. It is a part of Southern Limestone Alps and extends from the River Adige in the west to the Piave Valley in the east. The northern and southern borders are defined by the Puster Valley and the Sugana Valley...
, then part of Austria-Hungary
Austria-Hungary
Austria-Hungary , more formally known as the Kingdoms and Lands Represented in the Imperial Council and the Lands of the Holy Hungarian Crown of Saint Stephen, was a constitutional monarchic union between the crowns of the Austrian Empire and the Kingdom of Hungary in...
).

The base of the Ladinian stage is defined as the place in the stratigraphic record where the ammonite
Ammonite
Ammonite, as a zoological or paleontological term, refers to any member of the Ammonoidea an extinct subclass within the Molluscan class Cephalopoda which are more closely related to living coleoids Ammonite, as a zoological or paleontological term, refers to any member of the Ammonoidea an extinct...
species Eoprotrachyceras curionii first appears. The global reference profile for the base (the GSSP) is at an outcrop
Outcrop
An outcrop is a visible exposure of bedrock or ancient superficial deposits on the surface of the Earth. -Features:Outcrops do not cover the majority of the Earth's land surface because in most places the bedrock or superficial deposits are covered by a mantle of soil and vegetation and cannot be...
in the river bed of the Caffaro
Caffaro
Caffaro may refer to:*Caffaro , a river in north Italy*Caffaro di Rustico da Caschifellone , a Genoan crusader and chronicler...
river at Bagolino
Bagolino
Bagolino is a comune in the province of Brescia, in Lombardy, Italy, in the valley of the river Caffaro, on the right side of Valle Sabbia. Bagolino is famous for the cheese named Bagòss and the carnival....
, in the province of Brescia
Province of Brescia
The Province of Brescia is a Province in Lombardy, Italy. It borders with the province of Sondrio in the N and NW, the province of Bergamo in the W, province of Cremona in the SW and S, the province of Mantova to the S, and to the east, the province of Verona and Trentino .Source for statistical...
, northern Italy
Italy
Italy , officially the Italian Republic languages]] under the European Charter for Regional or Minority Languages. In each of these, Italy's official name is as follows:;;;;;;;;), is a unitary parliamentary republic in South-Central Europe. To the north it borders France, Switzerland, Austria and...
. The top of the Ladinian (the base of the Carnian) is at the first appearance of ammonite species Daxatina canadensis.

The Ladinian is sometimes subdivided into two subages or substages, the Fassanian (early or lower) and the Longobardian (late or upper). The Ladinian contains four ammonite biozones, which are evenly distributed among the two substages:

Vertebrates of Ladinian age include: