Encyclopedia
In the geologic timescale, the Anisian is the lower stage or earliest age of the Middle Triassic
Middle Triassic
In the geologic timescale, the Middle Triassic is the second of three epochs of the Triassic period or the middle of three series in which the Triassic system is divided. It spans the time between 245 ± 1.5 Ma and 228 ± 2 Ma...
series
Series (stratigraphy)
Series are subdivisions of rock layers made based on the age of the rock and corresponding to the dating system unit called an epoch, both being formally defined international conventions of the geological timescale. A series is therefore a sequence of rock depositions defining a...
or epoch and lasted from 245 million years ago until 237 million years ago, approximately. The Anisian age succeeds the Olenekian
Olenekian
In the geologic timescale, the Olenekian is an age in the Early Triassic epoch or a stage in the Lower Triassic series. It spans the time between 249.7 ± 0.7 Ma and 245 ± 0.7 Ma . The Olenekian follows the Induan and is followed by the Anisian.The Olenekian saw the deposition of a large part of the...
age (part of the Lower Triassic epoch) and precedes the Ladinian
Ladinian
The Ladinian is a stage and age in the Middle Triassic series or epoch. It spans the time between 237 ± 2 Ma and 228 ± 2 Ma...
age.

The stage and its name were established by Austria
Austria
Austria , officially the Republic of Austria , is a landlocked country of roughly 8.4 million people in Central Europe. It is bordered by the Czech Republic and Germany to the north, Slovakia and Hungary to the east, Slovenia and Italy to the south, and Switzerland and Liechtenstein to the...
n geologists Wilhelm Heinrich Waagen
Wilhelm Heinrich Waagen
Wilhelm Heinrich Waagen was a geologist and paleontologist. He was born June 23, 1841 in Munich and died March 24, 1900 in Vienna.-Overview:He received a Doctor of Philosophy degree at the University of Munich, where he published an elaborate work on geology that was crowned by the university...
and Carl Diener in 1895. The name comes from Anisus, the Latin
Latin
Latin is an Italic language originally spoken in Latium and Ancient Rome. It, along with most European languages, is a descendant of the ancient Proto-Indo-European language. Although it is considered a dead language, a number of scholars and members of the Christian clergy speak it fluently, and...
name of the river Enns
Enns
Enns may refer to:* Enns , Upper Austria, Austria* Enns , a surname* Enns , a southern tributary of the Danube River...
. The original type locality
Type locality (geology)
Type locality , also called type area or type locale, is the where a particular rock type, stratigraphic unit, fossil or mineral species is first identified....
is at Großreifling in the Austrian state
States of Austria
Austria is a federal republic made up of nine states, known in German as Länder . Since Land is also the German word for a country, the term Bundesländer is often used instead to avoid ambiguity. The Constitution of Austria uses both terms...
of Styria.

The base of the Anisian stage (also the base of the Middel Triassic series) is sometimes laid at the first appearance of conodont
Conodont
Conodonts are extinct chordates resembling eels, classified in the class Conodonta. For many years, they were known only from tooth-like microfossils now called conodont elements, found in isolation. Knowledge about soft tissues remains relatively sparse to this day...
species Chiosella timorensis in the stratigraphic record. Other stratigraphers prefer to use the base of magnetic chronozone MT1n. The global reference profile for the base (the GSSP or golden spike) is at a flank of the mountain Deşli Caira in the Romania
Romania
Romania is a country located at the crossroads of Central and Southeastern Europe, on the Lower Danube, within and outside the Carpathian arch, bordering on the Black Sea...
n Dobruja
Dobruja
Dobruja is a historical region shared by Bulgaria and Romania, located between the lower Danube river and the Black Sea, including the Danube Delta, Romanian coast and the northernmost part of the Bulgarian coast...
.

The Anisian contains six ammonite biozone
Biozone
Biostratigraphic units or Biozones are intervals of geological strata that are defined on the basis of their characteristic fossil taxa....
s: 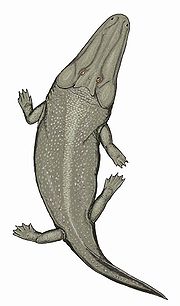 The earliest potential dinosaur
Dinosaur
Dinosaurs are a diverse group of animals of the clade and superorder Dinosauria. They were the dominant terrestrial vertebrates for over 160 million years, from the late Triassic period until the end of the Cretaceous , when the Cretaceous–Paleogene extinction event led to the extinction of...
fossil to date is a partial pubis
Pubis (bone)
In vertebrates, the pubic bone is the ventral and anterior of the three principal bones composing either half of the pelvis.It is covered by a layer of fat, which is covered by the mons pubis....
from Anisian-age rocks of the Moenkopi Formation
Moenkopi Formation
The Moenkopi is a geological formation that is spread across the U.S. states of New Mexico, northern Arizona, Nevada, southeastern California, eastern Utah and western Colorado. This unit is considered to be a group in Arizona. Part of the Colorado Plateau and Basin and Range, this formation was...
, Arizona
Arizona
Arizona ; is a state located in the southwestern region of the United States. It is also part of the western United States and the mountain west. The capital and largest city is Phoenix...
. It may have come from a herrerasaurid.

Examples of vertebrates from this age are:

Ananorites
Ananorites
Ananorites is an extinct cephalopod belonging to the ceratitd family Noritidae found in the Middle Triassic of the Himalaya. The shell is thinly discoidal, evolute, and smooth; cross section highly compressed; venter narrowly rounded except at the late stage where sharp shoulders are developed.As...

Grambergia
Groenlandites
Gymnites
Gymnites
Gymnites is a genus of ammonoid cephalopod from the Middle Triassic belonging to the ceratitid family Gymnitidae.-Description:The shell of Gymnites is evolute, generally smooth, with a wide umbilicus. Whorls are moderately embracing, whorl section oval and somewhat compressed. The outer whorl may...