Encyclopedia
La Pyramide Inversée is a skylight constructed in the Carrousel du Louvre
Carrousel du Louvre
The Carousel du Louvre is an underground shopping mall in Paris, France. The name refers to two nearby sites, the Louvre museum and the Place du Carrousel...
shopping mall
Shopping mall
A shopping mall, shopping centre, shopping arcade, shopping precinct or simply mall is one or more buildings forming a complex of shops representing merchandisers, with interconnecting walkways enabling visitors to easily walk from unit to unit, along with a parking area — a modern, indoor version...
in front of the Louvre Museum
Louvre
The Musée du Louvre – in English, the Louvre Museum or simply the Louvre – is one of the world's largest museums, the most visited art museum in the world and a historic monument. A central landmark of Paris, it is located on the Right Bank of the Seine in the 1st arrondissement...
in France
France
The French Republic , The French Republic , The French Republic , (commonly known as France , is a unitary semi-presidential republic in Western Europe with several overseas territories and islands located on other continents and in the Indian, Pacific, and Atlantic oceans. Metropolitan France...
. It may be thought of as a smaller sibling of the more famous Louvre Pyramid
Louvre Pyramid
The Louvre Pyramid is a large glass and metal pyramid, surrounded by three smaller pyramids, in the main courtyard of the Louvre Palace in Paris. The large pyramid serves as the main entrance to the Louvre Museum...
proper, yet turned upside down: its upturned base is easily seen from outside. 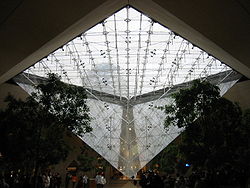 The pyramid
Pyramid
A pyramid is a structure whose outer surfaces are triangular and converge at a single point. The base of a pyramid can be trilateral, quadrilateral, or any polygon shape, meaning that a pyramid has at least three triangular surfaces...
marks the intersection of two main walkways and orients visitors towards the museum entrance. Tensioned against a 30-ton, 13.3-meter square steel caisson
Caisson (engineering)
In geotechnical engineering, a caisson is a retaining, watertight structure used, for example, to work on the foundations of a bridge pier, for the construction of a concrete dam, or for the repair of ships. These are constructed such that the water can be pumped out, keeping the working...
frame, the inverted pyramidal shape in laminated glass points downward towards the floor. The tip of the pyramid is suspended 1.4 meters (a little more than 4.5 feet) above floor level. Individual glass panes in the pyramid, 30 mm thick, are connected by stainless-steel
Stainless steel
In metallurgy, stainless steel, also known as inox steel or inox from French "inoxydable", is defined as a steel alloy with a minimum of 10.5 or 11% chromium content by mass....
crosses 381 mm in length. After dark, the structure is illuminated by a frieze
Frieze
thumb|267px|Frieze of the [[Tower of the Winds]], AthensIn architecture the frieze is the wide central section part of an entablature and may be plain in the Ionic or Doric order, or decorated with bas-reliefs. Even when neither columns nor pilasters are expressed, on an astylar wall it lies upon...
of spotlights
Searchlight
A searchlight is an apparatus that combines a bright light source with some form of curved reflector or other optics to project a powerful beam of light of approximately parallel rays in a particular direction, usually constructed so that it can be swiveled about.-Military use:The Royal Navy used...
.

Directly below the tip of the downwards-pointing glass pyramid, a small stone pyramid (about one meter/three feet high) is stationed on the floor, as if mirroring the larger structure above: The tips of the two pyramids almost touch.

La Pyramide Inversée was designed by architects Pei Cobb Freed & Partners
Pei Cobb Freed & Partners
Pei Cobb Freed & Partners is an architectural firm that was founded in 1955 by I. M. Pei as I. M. Pei & Associates, in 1966 called I. M. Pei & Partners, and received its current name and organization in 1989. The founders were I. M. Pei, Henry N. Cobb, and Eason H. Leonard. Pei and Leonard retired...
, and installed as part of the Phase II government renovation of the Louvre Museum. It was completed in 1993. In 1995, it was a finalist in the Benedictus Awards, described by the jury as "a remarkable anti-structure … a symbolic use of technology … a piece of sculpture. It was meant as an object but it is an object to transmit light."


In The Da Vinci Code 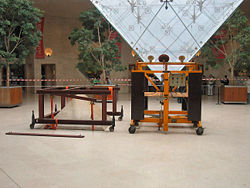 The Inverted Pyramid figures prominently on the concluding pages of Dan Brown
Dan Brown
Dan Brown is an American author of thriller fiction, best known for the 2003 bestselling novel, The Da Vinci Code. Brown's novels, which are treasure hunts set in a 24-hour time period, feature the recurring themes of cryptography, keys, symbols, codes, and conspiracy theories...
's international bestseller The Da Vinci Code
The Da Vinci Code
The Da Vinci Code is a 2003 mystery-detective novel written by Dan Brown. It follows symbologist Robert Langdon and Sophie Neveu as they investigate a murder in Paris's Louvre Museum and discover a battle between the Priory of Sion and Opus Dei over the possibility of Jesus having been married to...
. The protagonist of his novel, Robert Langdon
Robert Langdon
Robert Langdon is a fictional Harvard University professor of religious iconology and symbology The character was created by author Dan Brown for...
, reads esoteric symbol
Symbol
A symbol is something which represents an idea, a physical entity or a process but is distinct from it. The purpose of a symbol is to communicate meaning. For example, a red octagon may be a symbol for "STOP". On a map, a picture of a tent might represent a campsite. Numerals are symbols for...
ism into the two pyramids: The Inverted Pyramid is perceived as a Chalice
Chalice (cup)
A chalice is a goblet or footed cup intended to hold a drink. In general religious terms, it is intended for drinking during a ceremony.-Christian:...
, a feminine symbol, whereas the stone pyramid below is interpreted as a Blade, a masculine symbol: the whole structure could thus express the union of the gender
Gender
Gender is a range of characteristics used to distinguish between males and females, particularly in the cases of men and women and the masculine and feminine attributes assigned to them. Depending on the context, the discriminating characteristics vary from sex to social role to gender identity...
s. Moreover, Brown's protagonist concludes that the tiny stone pyramid is actually only the apex of a larger pyramid (possibly the same size as the inverted pyramid above), embedded in the floor as a secret chamber. This chamber is said to enclose the body of Mary Magdalene
Mary Magdalene
Mary Magdalene was one of Jesus' most celebrated disciples, and the most important woman disciple in the movement of Jesus. Jesus cleansed her of "seven demons", conventionally interpreted as referring to complex illnesses...
.

At the climax of the movie made from Brown's novel
The Da Vinci Code (film)
The Da Vinci Code is a 2006 American mystery thriller film directed by Ron Howard. The screenplay was written by Akiva Goldsman and based on Dan Brown's worldwide bestselling 2003 novel, The Da Vinci Code...
, the camera elaborately moves through the entire glass pyramid from above and then descends beneath the floor below to reveal the supposed hidden chamber under the tiny stone pyramid, containing the sarcophagus
Sarcophagus
A sarcophagus is a funeral receptacle for a corpse, most commonly carved or cut from stone. The word "sarcophagus" comes from the Greek σαρξ sarx meaning "flesh", and φαγειν phagein meaning "to eat", hence sarkophagus means "flesh-eating"; from the phrase lithos sarkophagos...
with the remains of Mary Magdalene
Mary Magdalene
Mary Magdalene was one of Jesus' most celebrated disciples, and the most important woman disciple in the movement of Jesus. Jesus cleansed her of "seven demons", conventionally interpreted as referring to complex illnesses...
.

Brown was not the first writer to offer esoteric interpretations of the Inverted Pyramid. In Raphaël Aurillac's work Le guide du Paris maçonnique the author declares that the Louvre used to be a Masonic temple. To Aurillac, the various glass pyramids constructed in recent decades include Masonic symbolism. Aurillac sees the downward-pointing pyramid as expressing the Rosicrucian motto V.I.T.R.I.O.L. (Visita Interiorem Terrae Rectificandoque / Invenies Occultum Lapidem, "Visit the interior of the earth and… you will find the secret stone"). Another writer on Masonic architecture, Dominique Setzepfandt, sees the two pyramids as suggesting "the compass and square that together form the Seal of Solomon
Seal of Solomon
In Medieval Jewish, Christian and Islamic legends, the Seal of Solomon was a magical signet ring said to have been possessed by King Solomon, which variously gave him the power to command demons, genies , or to speak with animals.-In legend :...
" (quoted in Code Da Vinci: L'enquête by Marie-France Etchegoin and Frédéric Lenoir).