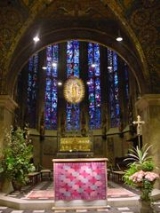 Encyclopedia
Ernani is an opera
Opera
Opera is an art form in which singers and musicians perform a dramatic work combining text and musical score, usually in a theatrical setting. Opera incorporates many of the elements of spoken theatre, such as acting, scenery, and costumes and sometimes includes dance...
tic dramma lirico in four acts by Giuseppe Verdi
Giuseppe Verdi
Giuseppe Fortunino Francesco Verdi was an Italian Romantic composer, mainly of opera. He was one of the most influential composers of the 19th century...
to an Italian libretto
Libretto
A libretto is the text used in an extended musical work such as an opera, operetta, masque, oratorio, cantata, or musical. The term "libretto" is also sometimes used to refer to the text of major liturgical works, such as mass, requiem, and sacred cantata, or even the story line of a...
by Francesco Maria Piave
Francesco Maria Piave
Francesco Maria Piave was an Italian opera librettist who was born in Murano in the lagoon of Venice, during the brief Napoleonic Kingdom of Italy. His career spanned over twenty years working with many of the significant composers of his day...
, based on the play Hernani
Hernani (drama)
----Hernani is a drama by the French romantic author Victor Hugo.The play opened in Paris on February 25, 1830...
by Victor Hugo
Victor Hugo
Victor-Marie Hugo was a Frenchpoet, playwright, novelist, essayist, visual artist, statesman, human rights activist and exponent of the Romantic movement in France....
. The first production took place at La Fenice Theatre
La Fenice
Teatro La Fenice is an opera house in Venice, Italy. It is one of the most famous theatres in Europe, the site of many famous operatic premieres. Its name reflects its role in permitting an opera company to "rise from the ashes" despite losing the use of two theatres...
, Venice
Venice
Venice is a city in northern Italy which is renowned for the beauty of its setting, its architecture and its artworks. It is the capital of the Veneto region...
on 9 March 1844. In 1904 it became the first opera to be recorded complete.

The UK premiere took place at Her Majesty's Theatre
Her Majesty's Theatre
Her Majesty's Theatre is a West End theatre, in Haymarket, City of Westminster, London. The present building was designed by Charles J. Phipps and was constructed in 1897 for actor-manager Herbert Beerbohm Tree, who established the Royal Academy of Dramatic Art at the theatre...
in London
London
London is the capital city of :England and the :United Kingdom, the largest metropolitan area in the United Kingdom, and the largest urban zone in the European Union by most measures. Located on the River Thames, London has been a major settlement for two millennia, its history going back to its...
on 8 March 1845 followed on 13 April 1847 by its US premiere in New York
New York
New York is a state in the Northeastern region of the United States. It is the nation's third most populous state. New York is bordered by New Jersey and Pennsylvania to the south, and by Connecticut, Massachusetts and Vermont to the east...
.

Today, Ernani is infrequently performed work, although it appeared on the roster of the Metropolitan Opera
Metropolitan Opera
The Metropolitan Opera is an opera company, located in New York City. Originally founded in 1880, the company gave its first performance on October 22, 1883. The company is operated by the non-profit Metropolitan Opera Association, with Peter Gelb as general manager...
as early as 1903 and has been given eighty-eight performances up to the March/April stagings in 2008. It regained some popularity from the early-1980s onward and was revived in a series of new productions at the San Francisco Opera
San Francisco Opera
San Francisco Opera is an American opera company, based in San Francisco, California.It was founded in 1923 by Gaetano Merola and is the second largest opera company in North America...
(1982), Lyric Opera of Chicago
Lyric Opera of Chicago
Lyric Opera of Chicago is one of the leading opera companies in the United States. It was founded in Chicago in 1952, under the name 'Lyric Theatre of Chicago' by Carol Fox, Nicolà Rescigno and Lawrence Kelly, with a season that included Maria Callas's American debut in Norma...
(1984), at La Scala
La Scala
La Scala , is a world renowned opera house in Milan, Italy. The theatre was inaugurated on 3 August 1778 and was originally known as the New Royal-Ducal Theatre at La Scala...
(1984) and the Met (1985), the 2008 stagings being the first since that time. It was given as part of the 1997 season of the Sarasota Opera
Sarasota Opera
Sarasota Opera is a professional opera company in Sarasota, Florida, USA, which owns and performs in the now-renovated 1,119-seat Sarasota Opera House. The 2011-2012 season is currently featuring Puccini’s Madama Butterfly in the fall...
's "Verdi Cycle" which plans to present all of Verdi's operas before the bi-centenary of his birth in 2013. The Teatro Regio di Parma
Teatro Regio di Parma
Teatro Regio di Parma is a famous 19th century opera house and opera company in Parma, Italy. The theatre was originally known as the Teatro Ducale....
, another company with a similar aim, gave it in October 2005.
Recently, it was given in May 2008 by Opera Boston
Opera Boston
Opera Boston is an opera company in Boston, Massachusetts. It specializes in innovative repertoire and rarely heard works, along with opera education and outreach programs designed to bring opera education to children, in schools and after-school programs throughout the Boston area.Its home base is...
, a company which presents unusual or rarely staged works, and the Melbourne City Opera
Melbourne City Opera
Melbourne City Opera, based in Melbourne, Australia, was formed in 1997. It was the successor of Globe Opera, and the intention is to carry on with those traditions, objectives and achievements.In 2007 the company began performing at the BMW Edge, a 450 seat indoor amphitheatre located in...
staged it in March/April 2009. That same year, in October/November, it formed part of the Lyric Opera of Chicago's season, and it will be revived by the Met in February 2012.

The bandits demand the reason for Ernani's gloom. (Chorus: Eviva! Beviam! Beviam! / "To you we drink" and Ernani pensoso! / "Ernani, so gloomy? Why, oh strong one, does care sit on your brow?"). Ernani replies (Recitative: "Thanks, dear friends"; Cavatina: Come rugiada al cespite / "As the flower turns to the sun") that he loves Elvira, who is about to be married against her will to old Gomez de Silva (O tu che l'alma adora). He asks the bandits to abduct her.

Elvira worries about her upcoming marriage (Scena: "Now sinks the sun and Silva does not return"; Cavatina
Cavatina
Cavatina is a musical term, originally a short song of simple character, without a second strain or any repetition of the air...
: Ernani, Ernani involami / "Ernani, Ernani, save me") as servants deliver Silva's wedding presents to her. She reaffirms her love for Ernani (Tutto sprezzo che d'Ernani / "I scorn everything which does not speak to my heart of Ernani"). King Carlos, disguised as a peasant, enters, but Elvira recognizes him and rejects the love that he offers her. As he attempts to use force, she grasps a dagger, but Ernani suddenly arrives and stops Carlos (Trio: "A friend comes quickly to your aid"). Carlos recognizes Ernani as the leader of the bandits. Ernani replies that Carlos robbed him of his lands and forced him into a life of banditry. As he invites Carlos to fight, Silva appears and sees Ernani (Infelice!..e tu credevi..che mai vegg'io! / "Dreadful sight"; Silva's cavatina: "Unhappy man! You thought this lovely...was yours"). Ernani offers to fight them both when Riccardo approaches and recognises the king. Ernani whispers to Elvira to prepare to flee.

A hall in Silva's palace

Ernani enters disguised as a pilgrim. He asks for shelter, which Silva grants him, and then learns from Silva that he about to marry Elvira who believes Ernani to be dead. Ernani reveals his true identity to Elvira and she tells him that she plans to kill herself at the altar (Duet: Ah, morir potessi adesso / "Ah, if I could die now"). Silva walks in at that moment, discovers the pair, but agrees to keep his word to Ernani and protect him from the king, for which Ernani will owe him a perpetual debt. (Trio: No, vendetta piu tremenda / "No, I want to keep a greater revenge"). Carlos arrives and wishes to know why the castle is barred. Silva refuses to surrender Ernani (Carlos' aria: Lo vedremo, veglio audace / "We shall see, you bold old man") and Don Carlos's men cannot find Ernani's hiding place. Silva keeps his word, even when the king secures Elvira as a hostage. Silva releases Ernani, and then challenges him to a duel. Ernani refuses to fight, but unites with Silva in his plans to free Elvira from the king. Ernani swears to appear at the summons of Silva, wherever he may be at that time (Odi il voto o grande Iddio / "Oh God, hear the vow") and the act ends with Ernani's aria of vengeance (Sprezzo la vita ne più m'alletta / "Life means nothing to me, only hope of vengeance"). 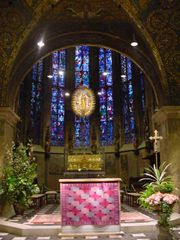 In the burial vault of Charles the Great at Aachen

Carlos visits the grave of the emperor Charlemagne
Charlemagne
Charlemagne was King of the Franks from 768 and Emperor of the Romans from 800 to his death in 814. He expanded the Frankish kingdom into an empire that incorporated much of Western and Central Europe. During his reign, he conquered Italy and was crowned by Pope Leo III on 25 December 800...
(Carlo Magno), whose successor, the new Holy Roman Emperor, is being elected by delegates from the relevant countries. Carlos resolves to change his life if he is crowned (Cavatina: Oh, de'verd'anni miei/ "Oh, the dreams and deceits of my youth"). Hiding behind the vault, he overhears a gathering of conspirators including Silva and Ernani. Ernani swears to murder Carlos. The conspiracy is foiled when Carlos's attendants enter and surprise the conspirators. The king commands that all the traitorous noblemen be executed. Ernani steps forward, declaring that thus he must die too; he is not the bandit Ernani, but Don Juan of Aragon, whose lands were taken from him. Elvira, who had been brought to Carlos as his intended empress, begs mercy for her lover, and Carlos, whose mood has changed, forgives them both and places Elvira's hand in that of Ernani.

Elvira and Ernani have just been married, when, in consternation, Ernani hears a bugle call. Silva arrives and silently hands Ernani a dagger. Ernani asks for time to "sip from the cup of love" (Ascolta, ascolta un detto ancor/ "Listen, just one word...") but, cursed by Silva as coward, Ernani keeps his oath and stabs himself in the heart. (Trio with Silva: E' vano, o donna, il piangere, e vano / "Your weeping is in vain, woman"). He dies in Elvira's arms, telling her to live.

The first complete recording of an opera was the 1904 recording of Ernani, on 40 single-sided discs, by HMV in England. Later recordings include: