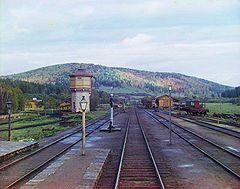 The oldest railway in the network is that linking Morshansk
Morshansk
Morshansk is a town in Tambov Oblast, Russia, located on the Tsna River north of Tambov. Population: 44,000 .-History:...
and Syzran
Syzran
Syzran is the third largest city in Samara Oblast, Russia, located on the right bank of Saratov Reservoir of the Volga River. Population: It was founded in 1683 as a fortress, and was granted town status in 1796. One tower from the 17th-century fortress still stands...
; it was built between 1872 and 1875. In 1880, engineers Nikolai Belelyubsky and Konstantin Mikhailovsky
Konstantin Mikhailovsky
Konstantin Yakovlevich Mikhailovsky was a Russian engineer of Ukrainian origin.-Works:Mikhailovsky designed the Alexander Railway Bridge across the Volga River near Syzran, the first bridge across the lower Volga and at the time the longest bridge in Europe.Mikhailovsky also designed the...
designed the Syzran Bridge
Syzran Bridge
The Alexander Railway Bridge across the Volga River near Syzran, so named after the reigning emperor Alexander II, was designed by Nikolai Belelyubsky and Konstantin Mikhailovsky. The first bridge across the Volga in its lower reaches, it was opened by Konstantin Posyet in 1880 as part of the...
across the Volga, then the longest in Europe. The railway reached Zlatoust
Zlatoust
Zlatoust is a city in Chelyabinsk Oblast, Russia, located on the Ay River , west of Chelyabinsk. Population: 181,000 ; 161,000 ; 99,000 ; 48,000 ; 21,000 ....
in 1890 and Chelyabinsk
Chelyabinsk
Chelyabinsk is a city and the administrative center of Chelyabinsk Oblast, Russia, located in the northwestern side of the oblast, south of Yekaterinburg, just to the east of the Ural Mountains, on the Miass River. Population: -History:...
2 years later. The main office of the Samara-Zlatoust Railway was located in Ufa
Ufa
-Demographics:Nationally, dominated by Russian , Bashkirs and Tatars . In addition, numerous are Ukrainians , Chuvash , Mari , Belarusians , Mordovians , Armenian , Germans , Jews , Azeris .-Government and administration:Local...
.

After the Russian Revolution, several lines of the Moscow
Moscow
Moscow is the capital, the most populous city, and the most populous federal subject of Russia. The city is a major political, economic, cultural, scientific, religious, financial, educational, and transportation centre of Russia and the continent...
-Kazan
Kazan
Kazan is the capital and largest city of the Republic of Tatarstan, Russia. With a population of 1,143,546 , it is the eighth most populous city in Russia. Kazan lies at the confluence of the Volga and Kazanka Rivers in European Russia. In April 2009, the Russian Patent Office granted Kazan the...
and Syzran-Vyazma
Vyazma
Vyazma is a town and the administrative center of Vyazemsky District of Smolensk Oblast, Russia, located on the Vyazma River, about halfway between Smolensk and Mozhaysk. Throughout its turbulent history, the city defended western approaches to the city of Moscow...
railways were added to the Syzran-Zlatoust Railway. The railway network was renamed after Valerian Kuybyshev in 1936 (as was the city of Samara). In 1989, the railway was the site of the worst train disaster in the history of the Soviet Union (see Ufa train disaster
Ufa train disaster
The Ufa train disaster was an explosion on the Kuybyshev Railway on June 4, 1989 at 1:15 in the Soviet Union, about 50 kilometers from the city of Ufa...
).
The source of this article is wikipedia, the free encyclopedia.  The text of this article is licensed under the GFDL.