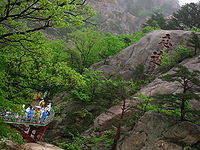 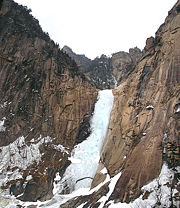 Kŭmgangsan has been known for its scenic beauty since antiquity
History of Korea
The Korean Peninsula was inhabited from the Lower Paleolithic about 400,000-500,000 years ago. Archeological evidence indicates that the presence of modern humans in northeast Asia dates to 39,000 years ago. The earliest known Korean pottery dates to around 8000 BC, and the Neolithic period began...
and is the subject of many different works of art
Art
Art is the product or process of deliberately arranging items in a way that influences and affects one or more of the senses, emotions, and intellect....
. Including its spring
Spring (season)
Spring is one of the four temperate seasons, the transition period between winter and summer. Spring and "springtime" refer to the season, and broadly to ideas of rebirth, renewal and regrowth. The specific definition of the exact timing of "spring" varies according to local climate, cultures and...
name, Kŭmgang (Hangeul: 금강산, Hanja
Hanja
Hanja is the Korean name for the Chinese characters hanzi. More specifically, it refers to those Chinese characters borrowed from Chinese and incorporated into the Korean language with Korean pronunciation...
: ), it has many different names for each season, but it is most widely known today as Kŭmgangsan. In summer
Summer
Summer is the warmest of the four temperate seasons, between spring and autumn. At the summer solstice, the days are longest and the nights are shortest, with day-length decreasing as the season progresses after the solstice...
it is called Pongraesan (봉래산, : the place where a Spirit dwells); in autumn
Autumn
Autumn is one of the four temperate seasons. Autumn marks the transition from summer into winter usually in September or March when the arrival of night becomes noticeably earlier....
, Phung'aksan (풍악산, : hill of colored leaves, or : great mountain of colored leaves); in winter
Winter
Winter is the coldest season of the year in temperate climates, between autumn and spring. At the winter solstice, the days are shortest and the nights are longest, with days lengthening as the season progresses after the solstice.-Meteorology:...
, Kaegolsan (개골산, : stone bone mountain).

The mountain consists almost entirely of granite
Granite
Granite is a common and widely occurring type of intrusive, felsic, igneous rock. Granite usually has a medium- to coarse-grained texture. Occasionally some individual crystals are larger than the groundmass, in which case the texture is known as porphyritic. A granitic rock with a porphyritic...
and diorite
Diorite
Diorite is a grey to dark grey intermediate intrusive igneous rock composed principally of plagioclase feldspar , biotite, hornblende, and/or pyroxene. It may contain small amounts of quartz, microcline and olivine. Zircon, apatite, sphene, magnetite, ilmenite and sulfides occur as accessory...
, weathered over centuries into a wide variety of shapes, including over 12,000 picturesque stone formations, ravines, cliffs, stone pillars, and peaks.

Since 1998, South Korea
South Korea
The Republic of Korea , , is a sovereign state in East Asia, located on the southern portion of the Korean Peninsula. It is neighbored by the People's Republic of China to the west, Japan to the east, North Korea to the north, and the East China Sea and Republic of China to the south...
n tourists have been allowed to visit Kŭmgangsan, initially travelling by cruise ship
Cruise ship
A cruise ship or cruise liner is a passenger ship used for pleasure voyages, where the voyage itself and the ship's amenities are part of the experience, as well as the different destinations along the way...
, but recently more commonly by coach
Coach (vehicle)
A coach is a large motor vehicle, a type of bus, used for conveying passengers on excursions and on longer distance express coach scheduled transport between cities - or even between countries...
. In 2002, the area around the mountain was separated from Kangwŏn Province and organized as a separately-administered Tourist Region. The land route was opened in 2003. A rail link exists on the North Korean side up to the border, but no tracks are laid between Gangneung
Gangneung
Gangneung is a city in Gangwon-do, on the east coast of South Korea. It has a population of 229,869 . Gangneung is the economic centre of the Yeongdong region of eastern Gangwon Province. Gangneung has many tourist attractions, like Jeongdongjin, one of the most famous towns in Korea...
and the border in South Korea.

In 1998, there were 15,500 tourists in November and December, in 1999 there were 148,000, and in 2000 213,000. In 2001 tourist numbers dropped to 58,000 amidst disagreements over the access over land. , almost 500,000 have visited the Kŭmgangsan Tourist Region. Tourist numbers have since established themselves at about 240,000 a year. In June 2005, Hyundai Asan
Hyundai Asan
Hyundai Asan is an arm of the South Korean conglomerate Hyundai Group and a major investor in North Korea. The company manages a number of projects, including the Kumgang-san tourist resort and road/rail building operations...
announced the 1 millionth South Korean visit to the area.

The Kŭmgangsan Tourist Region is thought to be one way for the North Korean government to receive hard currency
Hard currency
Hard currency , in economics, refers to a globally traded currency that is expected to serve as a reliable and stable store of value...
from abroad. Therefore the official currency of the tour is neither the South Korean won
South Korean won
The won is the currency of South Korea. A single won is divided into 100 jeon, the monetary subunit. The jeon is no longer used for everyday transactions, and appears only in foreign exchange rates...
nor the North Korean won
North Korean won
The won is the currency of North Korea . It is subdivided into 100 chon. The won is issued by the Central Bank of the Democratic People's Republic of Korea...
, but the US dollar. Since 2003, food and services to South Korean tourists are provided by some North Koreans. But most of the staff in the hotels are Chinese citizens of Korean heritage with Korean language
Korean language
Korean is the official language of the country Korea, in both South and North. It is also one of the two official languages in the Yanbian Korean Autonomous Prefecture in People's Republic of China. There are about 78 million Korean speakers worldwide. In the 15th century, a national writing...
skills. The area is developed by Hyundai
Hyundai
Hyundai ) is a global conglomerate company, part of the Korean chaebol, that was founded in South Korea by one of the most famous businessmen in Korean history: Chung Ju-yung...
Asan, which plans to expand the site with a proper ski resort
Ski resort
A ski resort is a resort developed for skiing and other winter sports. In Europe a ski resort is a town or village in a ski area - a mountainous area, where there are ski trails and supporting services such as hotels and other accommodation, restaurants, equipment rental and a ski lift system...
to complement the current sleigh course, and complete golf course
Golf course
A golf course comprises a series of holes, each consisting of a teeing ground, fairway, rough and other hazards, and a green with a flagstick and cup, all designed for the game of golf. A standard round of golf consists of playing 18 holes, thus most golf courses have this number of holes...
s. Many plans for expansion, however, are in their earliest stages.

On the morning of July 11, 2008, a 53-year-old South-Korean tourist was shot and killed while walking on the resort's beach. Wang-ja entered a military area by crossing over a sand dune and was shot twice by North Korean soldiers. North Korea claimed that sentries had no choice but to shoot her because, despite their order to stop, she fled. South Korea demanded an on-the-spot survey, but North Korea declined it, claiming all the facts were clear and all responsibilities were the victim's and South Korea's. Due to the shooting, South Korea temporarily suspended all trips to Kŭmgangsan. In March 2010, the DPRK government warned of "extraordinary measures" if the tourism ban were not lifted. On April 23, 2010, the North Korean government seized 5 properties owned by South Korea at the resort, saying that it was done "in compensation for the damage the North side suffered due to the suspension of the tour for a long period". In seizing the properties, North Korea also alluded to the Baengnyeong incident, showing displeasure with South Korea blaming North Korea for the sinking of the ship. Since April 2010, North Korea is now permitting companies to run tours from the North Korean side, making it appear increasingly unlikely that tours will be resumed from the South. However, on October 1, 2010, news reports said, "Red Cross officials from the two Koreas agreed Friday to hold reunions for families separated by the Korean War amid mixed signals from North Korea on easing tensions over the sinking of a South Korean warship. One hundred families from each country will attend the meetings from Oct. 30 to Nov. 5 at a hotel and reunion center at the North's scenic Diamond Mountain resort, Unification Ministry spokeswoman Lee Jong-joo said." .. As of September 2011 North Korea have begun operating cruises directly from Rason in north-eastern North Korea, to the port in Kumgangsan, offering visitors the chance to stay in the resorts previously run by the south. Although they are aimed primarily at Chinese guests, western companies are also offering the tours
.