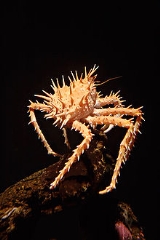 Encyclopedia
King crabs, also called stone crabs, are a superfamily of crab
Crab
True crabs are decapod crustaceans of the infraorder Brachyura, which typically have a very short projecting "tail" , or where the reduced abdomen is entirely hidden under the thorax...
-like decapod
Decapoda
The decapods or Decapoda are an order of crustaceans within the class Malacostraca, including many familiar groups, such as crayfish, crabs, lobsters, prawns and shrimp. Most decapods are scavengers. It is estimated that the order contains nearly 15,000 species in around 2,700 genera, with...
crustacean
Crustacean
Crustaceans form a very large group of arthropods, usually treated as a subphylum, which includes such familiar animals as crabs, lobsters, crayfish, shrimp, krill and barnacles. The 50,000 described species range in size from Stygotantulus stocki at , to the Japanese spider crab with a leg span...
s chiefly found in cold seas. Because of their large size and the taste of their meat, many species
Species
In biology, a species is one of the basic units of biological classification and a taxonomic rank. A species is often defined as a group of organisms capable of interbreeding and producing fertile offspring. While in many cases this definition is adequate, more precise or differing measures are...
are widely caught and sold as food
Food
Food is any substance consumed to provide nutritional support for the body. It is usually of plant or animal origin, and contains essential nutrients, such as carbohydrates, fats, proteins, vitamins, or minerals...
, the most common being the red king crab, Paralithodes camtschaticus
Paralithodes camtschaticus
The red king crab, Paralithodes camtschaticus, is a species of king crab native to the Bering Sea. It grows to a leg span of , and is heavily targeted by fisheries.-Description:...
.

Glyptolithodes is found chiefly in the Southern Hemisphere
Southern Hemisphere
The Southern Hemisphere is the part of Earth that lies south of the equator. The word hemisphere literally means 'half ball' or "half sphere"...
, but extending as far north as California
California
California is a state located on the West Coast of the United States. It is by far the most populous U.S. state, and the third-largest by land area...
, although all its closest relatives live in the Northern Hemisphere
Northern Hemisphere
The Northern Hemisphere is the half of a planet that is north of its equator—the word hemisphere literally means “half sphere”. It is also that half of the celestial sphere north of the celestial equator...
. Its single species, G. cristatipes was originally placed in the genus Rhinolithodes
Rhinolithodes
Rhinolithodes wosnessenskii, also called the rhinoceros crab or golf-ball crab, is a species of king crab, the only species in the genus Rhinolithodes. The species is named after Ilya Gabrilovic Voznesenski. It is found at depths of in the north-east Pacific Ocean from Kodiak, Alaska to Crescent...
.

The golden king crab, Lithodes aequispinus, is caught in the Aleutian Chain off the coast of Alaska
Alaska
Alaska is the largest state in the United States by area. It is situated in the northwest extremity of the North American continent, with Canada to the east, the Arctic Ocean to the north, and the Pacific Ocean to the west and south, with Russia further west across the Bering Strait...
. The golden king crab is significantly smaller than the red and blue king crabs, averaging 5–8 lb (2.3–3.6 ). It tastes similar to the red and blue king crabs, though perhaps somewhat sweeter. They are considerably cheaper due to their appearance and size.

Significant populations occur in pockets in the waters off the Pribilof
Pribilof Islands
The Pribilof Islands are a group of four volcanic islands off the coast of mainland Alaska, in the Bering Sea, about north of Unalaska and 200 miles southwest of Cape Newenham. The Siberia coast is roughly northwest...
and Shumagin Islands
Shumagin Islands
The Shumagin Islands are a group of 20 islands in the Aleutians East Borough south of the mainland of Alaska, USA, at54°54'–55°20' North 159°15'–160°45' West. The largest islands are Unga Island, Popof Island, Korovin Island, and Nagai Island. Other islands include Andronica, Big Koniuji, Little...
, Shelikof Strait
Shelikof Strait
Shelikof Strait is a strait on the southwestern coast of the U.S. state of Alaska between the Alaska mainland to the west and Kodiak and Afognak islands to the east....
, Prince William Sound
Prince William Sound
Prince William Sound is a sound off the Gulf of Alaska on the south coast of the U.S. state of Alaska. It is located on the east side of the Kenai Peninsula. Its largest port is Valdez, at the southern terminus of the Trans-Alaska Pipeline System...
and at least as far south as lower Chatham Strait
Chatham Strait
Chatham Strait, or Shee ya xhaak in the Tlingit language, is a narrow passage of the Alexander Archipelago in the southeastern region of the U.S. state of Alaska. It separates Chichagof Island and Baranof Island to its west from Admiralty Island and Kuiu Island on its east.It is long and extends...
in the south-east, where a regular commercial fishery occurs annually. It should be noted they occur in deeper water than the red king crab, often in depths exceeding 300 fathom (1,800 ft; 548.6 m). Juvenile golden king crabs are cryptic and rely on structure-forming sessile
Sessility (zoology)
In zoology, sessility is a characteristic of animals which are not able to move about. They are usually permanently attached to a solid substrate of some kind, such as a part of a plant or dead tree trunk, a rock, or the hull of a ship in the case of barnacles. Corals lay down their own...
invertebrates growing on the sea floor – such as coral
Coral
Corals are marine animals in class Anthozoa of phylum Cnidaria typically living in compact colonies of many identical individual "polyps". The group includes the important reef builders that inhabit tropical oceans and secrete calcium carbonate to form a hard skeleton.A coral "head" is a colony of...
s, sponges and sea-whips – to provide habitat. These sessile invertebrates are slow-growing and they are at risk in certain areas where commercial fishing by bottom trawling has been common practice. For this reason, large tracts of the sea floor along the Aleutian Island chain have been protected from bottom trawling under the Magnuson-Stevens Fishery Conservation and Management Act.

The scarlet king crab, Lithodes couesi, is not often fished due to its small size and insufficient population to support commercial harvesting.

Lithodes maja occurs in the North Atlantic
Atlantic Ocean
The Atlantic Ocean is the second-largest of the world's oceanic divisions. With a total area of about , it covers approximately 20% of the Earth's surface and about 26% of its water surface area...
, including Northern Europe
Northern Europe
Northern Europe is the northern part or region of Europe. Northern Europe typically refers to the seven countries in the northern part of the European subcontinent which includes Denmark, Estonia, Latvia, Lithuania, Norway, Finland and Sweden...
and Canada's
Canada
Canada is a North American country consisting of ten provinces and three territories. Located in the northern part of the continent, it extends from the Atlantic Ocean in the east to the Pacific Ocean in the west, and northward into the Arctic Ocean...
east coast. It is not abundant enough to support commercial fishery, and is becoming rare in some areas.

In 2011, the scientists have found Neolythodes yaldwini on the edge of Antartica, probably as a result of global warming, with major impacts on sediment texture, bioturbation
Bioturbation
In oceanography, limnology, pedology, geology , and archaeology, bioturbation is the displacement and mixing of sediment particles and solutes by fauna or flora . The mediators of bioturbation are typically annelid worms , bivalves In oceanography, limnology, pedology, geology (especially...
and local faunal diversity.

Red (P. camtschaticus) and blue (P. platypus) king crabs are some of the most important fisheries in Alaska, however populations have fluctuated in the past 25 years and some areas are currently closed due to overfishing. The two species are similar in size, shape and life history. Habitat is the main factor separating the range of blue and red king crabs in the Bering Sea. Red king crabs prefer shallow, muddy or sandy habitats in Bristol Bay and Norton Sound, while blue king crabs prefer the deeper areas made up of cobble, gravel and rock that occur around the Pribilof, St. Matthew, St. Lawrence and the Diomede Islands.

Red king crabs have an 11-month brood cycle in their first reproductive year and a 12 month cycle thereafter. Both red and blue king crabs have planktotrophic larvae that undergo 4 zoeal stages in the water column and a non-feeding, glaucothoe stage which is an intermediate stage which seeks appropriate habitat on the sea floor.

The red king crab, Paralithodes camtschaticus, is a very large species, sometimes reaching a carapace width of 11 in (28 cm) and a leg span of 6 ft (1.8 m). Its natural range is the Bering Sea
Bering Sea
The Bering Sea is a marginal sea of the Pacific Ocean. It comprises a deep water basin, which then rises through a narrow slope into the shallower water above the continental shelves....
, between the Aleutian Islands and St. Lawrence Island
St. Lawrence Island
St. Lawrence Island is located west of mainland Alaska in the Bering Sea, just south of the Bering Strait, at about 63°30' North 173°20' West. The village of Gambell is located on the northwest cape, from the Chukchi Peninsula in the Russian Far East. The island is part of Alaska, but closer to...
. It can now also be found in the Barents Sea
Barents Sea
The Barents Sea is a marginal sea of the Arctic Ocean, located north of Norway and Russia. Known in the Middle Ages as the Murman Sea, the sea takes its current name from the Dutch navigator Willem Barents...
and the European Arctic
Arctic Ocean
The Arctic Ocean, located in the Northern Hemisphere and mostly in the Arctic north polar region, is the smallest and shallowest of the world's five major oceanic divisions...
, where it was intentionally introduced and is now becoming a pest.

The blue king crab, Paralithodes platypus, lives near St. Matthew Island
St. Matthew Island
St. Matthew Island is a remote island in the Bering Sea in Alaska, WNW of Nunivak Island. The island has a land area of , making it the 43rd largest island in the United States. Its most southerly point is Cape Upright which features cliff faces which exceed...
, the Pribilof Islands
Pribilof Islands
The Pribilof Islands are a group of four volcanic islands off the coast of mainland Alaska, in the Bering Sea, about north of Unalaska and 200 miles southwest of Cape Newenham. The Siberia coast is roughly northwest...
, and the Diomede Islands
Diomede Islands
The Diomede Islands , also known in Russia as Gvozdev Islands , consist of two rocky, tuya-like islands:* The U.S. island of Little Diomede or, in its native language, Ignaluk , and* The Russian island of Big Diomede , also known as Imaqliq,...
, Alaska, and there are populations along the coasts of Japan and Russia. Blue king crabs from the Pribilof Islands are the largest of all the king crabs, sometimes exceeding 18 lb
Pound (mass)
The pound or pound-mass is a unit of mass used in the Imperial, United States customary and other systems of measurement...
(8 kg
Kilogram
The kilogram or kilogramme , also known as the kilo, is the base unit of mass in the International System of Units and is defined as being equal to the mass of the International Prototype Kilogram , which is almost exactly equal to the mass of one liter of water...
) in weight.
The source of this article is wikipedia, the free encyclopedia.  The text of this article is licensed under the GFDL.