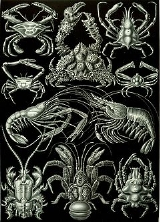 Encyclopedia
The decapods or Decapoda (literally "ten-footed") are an order of crustacean
Crustacean
Crustaceans form a very large group of arthropods, usually treated as a subphylum, which includes such familiar animals as crabs, lobsters, crayfish, shrimp, krill and barnacles. The 50,000 described species range in size from Stygotantulus stocki at , to the Japanese spider crab with a leg span...
s within the class Malacostraca
Malacostraca
Malacostraca is the largest of the six classes of crustaceans, containing over 25,000 extant species, divided among 16 orders. Its members display a greater diversity of body forms than any other class of animals, and include crabs, lobsters, shrimp, krill, woodlice, scuds , mantis shrimp and many...
, including many familiar groups, such as crayfish
Crayfish
Crayfish, crawfish, or crawdads – members of the superfamilies Astacoidea and Parastacoidea – are freshwater crustaceans resembling small lobsters, to which they are related...
, crab
Crab
True crabs are decapod crustaceans of the infraorder Brachyura, which typically have a very short projecting "tail" , or where the reduced abdomen is entirely hidden under the thorax...
s, lobster
Lobster
Clawed lobsters comprise a family of large marine crustaceans. Highly prized as seafood, lobsters are economically important, and are often one of the most profitable commodities in coastal areas they populate.Though several groups of crustaceans are known as lobsters, the clawed lobsters are most...
s, prawn
Prawn
Prawns are decapod crustaceans of the sub-order Dendrobranchiata. There are 540 extant species, in seven families, and a fossil record extending back to the Devonian...
s and shrimp
Shrimp
Shrimp are swimming, decapod crustaceans classified in the infraorder Caridea, found widely around the world in both fresh and salt water. Adult shrimp are filter feeding benthic animals living close to the bottom. They can live in schools and can swim rapidly backwards. Shrimp are an important...
. Most decapods are scavenger
Scavenger
Scavenging is both a carnivorous and herbivorous feeding behavior in which individual scavengers search out dead animal and dead plant biomass on which to feed. The eating of carrion from the same species is referred to as cannibalism. Scavengers play an important role in the ecosystem by...
s. It is estimated that the order contains nearly 15,000 species in around 2,700 genera, with approximately 3,300 fossil species. Nearly half of these species are crabs, with the shrimp ( species) and Anomura
Anomura
Anomura is a group of decapod crustaceans, including hermit crabs and others. Although the names of many anomurans includes the word crab, all true crabs are in the sister group to the Anomura, the Brachyura .-Description:The name Anomala reflects the unusual variety of forms in this group;...
(including hermit crab
Hermit crab
Hermit crabs are decapod crustaceans of the superfamily Paguroidea. Most of the 1100 species possess an asymmetrical abdomen which is concealed in an empty gastropod shell that is carried around by the hermit crab.-Description:...
s, porcelain crab
Porcelain crab
Porcelain crabs are decapod crustaceans in the widespread family Porcellanidae, which superficially resemble true crabs. They are typically less than wide, and have flattened bodies as an adaptation for living in rock crevices...
s, squat lobster
Squat lobster
Squat lobsters are decapod crustaceans of the families Galatheidae, Chirostylidae and Kiwaidae, including the common genera Galathea and Munida. They are not lobsters at all, but are more closely related to porcelain crabs, hermit crabs and then, more distantly, true crabs...
s: species), making up the bulk of the remainder. The earliest fossil
Fossil
Fossils are the preserved remains or traces of animals , plants, and other organisms from the remote past...
decapod is the Devonian
Devonian
The Devonian is a geologic period and system of the Paleozoic Era spanning from the end of the Silurian Period, about 416.0 ± 2.8 Mya , to the beginning of the Carboniferous Period, about 359.2 ± 2.5 Mya...
Palaeopalaemon.

As the name Decapoda (from the Greek
Greek language
Greek is an independent branch of the Indo-European family of languages. Native to the southern Balkans, it has the longest documented history of any Indo-European language, spanning 34 centuries of written records. Its writing system has been the Greek alphabet for the majority of its history;...
, , "ten", and , -pod, "foot") implies, all decapods have ten legs. These are in the form of five pairs of thoracic appendages on the last five thoracic segments. The front three pairs function as mouthparts and are generally referred to as maxillipeds; the remainder are pereiopods. In many decapods, however, one pair of legs has enlarged pincers; the claws are called chelae
Chela (organ)
A chela is a pincer-like organ terminating certain limbs of some arthropods. The name comes from Greek through New Latin . The plural form is chelae. Legs bearing a chela are called chelipeds. Another name is claw because most chelae are curved and have a sharp point like a claw....
, so those legs may be called chelipeds. Further appendages are found on the abdomen, with each segment capable of carrying a pair of biramous pleopods, the last of which form part of the tail fan (together with the telson
Telson
The telson is the last division of the body of a crustacean. It is not considered a true segment because it does not arise in the embryo from teloblast areas as do real segments. It never carries any appendages, but a forked "tail" called the caudal furca is often present. Together with the...
) and are called uropods.

Classification within the order Decapoda depends on the structure of the gill
Gill
A gill is a respiratory organ found in many aquatic organisms that extracts dissolved oxygen from water, afterward excreting carbon dioxide. The gills of some species such as hermit crabs have adapted to allow respiration on land provided they are kept moist...
s and legs, and the way in which the larva
Larva
A larva is a distinct juvenile form many animals undergo before metamorphosis into adults. Animals with indirect development such as insects, amphibians, or cnidarians typically have a larval phase of their life cycle...
e develop, giving rise to two suborders: Dendrobranchiata and Pleocyemata
Pleocyemata
Pleocyemata is a sub-order of decapod crustaceans, erected by Martin Burkenroad in 1963. Burkenroad's classification replaced the earlier sub-orders of Natantia and Reptantia with the monophyletic groups Dendrobranchiata and Pleocyemata...
. Dendrobranchiata consists of prawn
Prawn
Prawns are decapod crustaceans of the sub-order Dendrobranchiata. There are 540 extant species, in seven families, and a fossil record extending back to the Devonian...
s, including many species colloquially referred to as "shrimp", such as the "white shrimp", Litopenaeus setiferus. Pleocyemata includes the remaining groups, including true shrimp
Shrimp
Shrimp are swimming, decapod crustaceans classified in the infraorder Caridea, found widely around the world in both fresh and salt water. Adult shrimp are filter feeding benthic animals living close to the bottom. They can live in schools and can swim rapidly backwards. Shrimp are an important...
. Those groups which usually walk rather than swim (Pleocyemata, excluding Stenopodidea and Caridea) form a clade called Reptantia.

The following classification to the level of superfamilies follows De Grave et al. 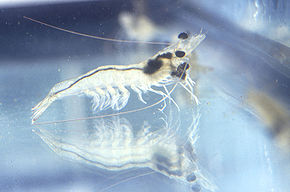 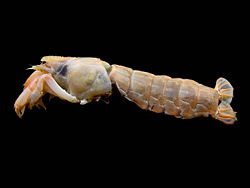 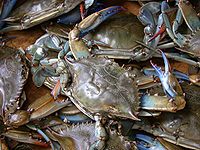