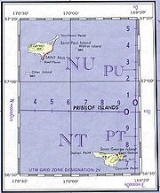 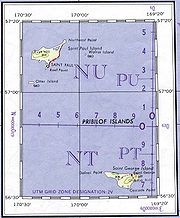 The Pribilof Islands are a group of four volcanic islands off the coast of mainland Alaska
Alaska
Alaska is the largest state in the United States by area. It is situated in the northwest extremity of the North American continent, with Canada to the east, the Arctic Ocean to the north, and the Pacific Ocean to the west and south, with Russia further west across the Bering Strait...
, in the Bering Sea
Bering Sea
The Bering Sea is a marginal sea of the Pacific Ocean. It comprises a deep water basin, which then rises through a narrow slope into the shallower water above the continental shelves....
, about 200 miles (321.9 km) north of Unalaska
Unalaska, Alaska
Unalaska is a city in the Aleutians West Census Area of the Unorganized Borough of the U.S. state of Alaska. Unalaska is located on Unalaska Island and neighboring Amaknak Island in the Aleutian Islands off of mainland Alaska....
and 200 miles southwest of Cape Newenham. The Siberia
Siberia
Siberia is an extensive region constituting almost all of Northern Asia. Comprising the central and eastern portion of the Russian Federation, it was part of the Soviet Union from its beginning, as its predecessor states, the Tsardom of Russia and the Russian Empire, conquered it during the 16th...
coast is roughly 500 miles (804.7 km) northwest. About 200 km² (77.2 sq mi) in total area, they are mostly rocky and are covered with tundra
Tundra
In physical geography, tundra is a biome where the tree growth is hindered by low temperatures and short growing seasons. The term tundra comes through Russian тундра from the Kildin Sami word tūndâr "uplands," "treeless mountain tract." There are three types of tundra: Arctic tundra, alpine...
, with a population
Population
A population is all the organisms that both belong to the same group or species and live in the same geographical area. The area that is used to define a sexual population is such that inter-breeding is possible between any pair within the area and more probable than cross-breeding with individuals...
of 684 as of the 2000 census
United States Census, 2000
The Twenty-second United States Census, known as Census 2000 and conducted by the Census Bureau, determined the resident population of the United States on April 1, 2000, to be 281,421,906, an increase of 13.2% over the 248,709,873 persons enumerated during the 1990 Census...
.

The islands were recorded in 1767 and visited in 1788 by Gavriil Pribilof
Gavriil Pribilof
Gavriil Loginovich Pribylov was a Russian navigator who discovered the Bering Sea islands of St. George Island and St. Paul Island in 1786 and 1787. The islands, and surrounding small islets, now bear his name, being known as the Pribilof Islands.Pribylov was commander of the ship St. George ,...
, who discovered the fur seal
Fur seal
Fur seals are any of nine species of pinnipeds in the Otariidae family. One species, the northern fur seal inhabits the North Pacific, while seven species in the Arctocephalus genus are found primarily in the Southern hemisphere...
(Callorhinus ursinus) rookeries for which they became famous, and thus became Russia
Russia
Russia or , officially known as both Russia and the Russian Federation , is a country in northern Eurasia. It is a federal semi-presidential republic, comprising 83 federal subjects...
n territory. The islands passed to the United States
United States
The United States of America is a federal constitutional republic comprising fifty states and a federal district...
in 1867 with the Alaska Purchase
Alaska purchase
The Alaska Purchase was the acquisition of the Alaska territory by the United States from Russia in 1867 by a treaty ratified by the Senate. The purchase, made at the initiative of United States Secretary of State William H. Seward, gained of new United States territory...
. From 1870 to 1890, the U;S. government leased them to the Alaska Commercial Company
Alaska Commercial Company
The Alaska Commercial Company is a company that operated retail stores in Alaska during the early period of Alaska's ownership by the United States. From 1901 to 1992, it was known as the Northern Commercial Company . In 1992, it resumed business as the Alaska Commercial Company under the...
. From 1890 through 1910, the North American Commercial Company held the monopoly on seal-hunting there, but the industry shrank considerably owing to seal-hunting on the open sea.

Naturalist and paleontologist Roy Chapman Andrews
Roy Chapman Andrews
Roy Chapman Andrews was an American explorer, adventurer and naturalist who became the director of the American Museum of Natural History. He is primarily known for leading a series of expeditions through the fragmented China of the early 20th century into the Gobi Desert and Mongolia...
visited the island in 1913 aboard the schooner Adventuress in her maiden voyage with John Borden and crew. His films of fur seals led to efforts to protect the animals.
The buildings on St. George and St. Paul islands related to the hunting of the Northern Fur Seal make up the national historic district
National Historic District
National Historic District may refer to a historic district designated by a national government, including:* a historic district listed on the United States National Register of Historic Places * a United States National Historic Landmark District...
.

Today, St. Paul has a population of 532 (2000 census), with its economy heavily dependent on the annual taking of the snow crab and on subsistence and commercial halibut
Halibut
Halibut is a flatfish, genus Hippoglossus, from the family of the right-eye flounders . Other flatfish are also called halibut. The name is derived from haly and butt , for its popularity on Catholic holy days...
harvests. Support services to commercial fleets plying the waters of the Bering Sea also contribute to the economy
Economy
An economy consists of the economic system of a country or other area; the labor, capital and land resources; and the manufacturing, trade, distribution, and consumption of goods and services of that area...
. The balance of economic activity on the island relates to working for the government. The U.S. Coast Guard
United States Coast Guard
The United States Coast Guard is a branch of the United States Armed Forces and one of the seven U.S. uniformed services. The Coast Guard is a maritime, military, multi-mission service unique among the military branches for having a maritime law enforcement mission and a federal regulatory agency...
maintains a base and LORAN-C master station on St. Paul. The National Weather Service
National Weather Service
The National Weather Service , once known as the Weather Bureau, is one of the six scientific agencies that make up the National Oceanic and Atmospheric Administration of the United States government...
has a station on the island, and the National Oceanic and Atmospheric Administration
National Oceanic and Atmospheric Administration
The National Oceanic and Atmospheric Administration , pronounced , like "noah", is a scientific agency within the United States Department of Commerce focused on the conditions of the oceans and the atmosphere...
maintains a presence.

St. George has a population of 152. The economy is similar to that of St Paul. Many of the residents of the islands are related. The islands are home to a majority of Alaska's Aleut population.

The Pribilof Islands are a birdwatching
Birdwatching
Birdwatching or birding is the observation of birds as a recreational activity. It can be done with the naked eye, through a visual enhancement device like binoculars and telescopes, or by listening for bird sounds. Birding often involves a significant auditory component, as many bird species are...
attraction, home to many species that do not fly in North America beyond Alaska. More than 240 species have been identified, and an estimated two million seabirds nest there annually. St. Paul is particularly popular, having a high cliff
Cliff
In geography and geology, a cliff is a significant vertical, or near vertical, rock exposure. Cliffs are formed as erosion landforms due to the processes of erosion and weathering that produce them. Cliffs are common on coasts, in mountainous areas, escarpments and along rivers. Cliffs are usually...
wall, known as Ridge Wall, above the Bering Sea.