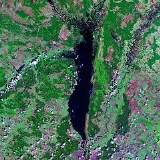 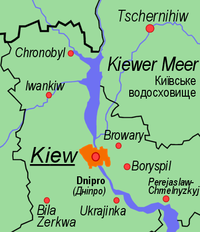 The Kiev Reservoir locally the Kiev Sea, is a large water reservoir located on the Dnieper River
Dnieper River
The Dnieper River is one of the major rivers of Europe that flows from Russia, through Belarus and Ukraine, to the Black Sea.The total length is and has a drainage basin of .The river is noted for its dams and hydroelectric stations...
in Ukraine
Ukraine
Ukraine is a country in Eastern Europe. It has an area of 603,628 km², making it the second largest contiguous country on the European continent, after Russia...
. Named after the city of Kiev
Kiev
Kiev or Kyiv is the capital and the largest city of Ukraine, located in the north central part of the country on the Dnieper River. The population as of the 2001 census was 2,611,300. However, higher numbers have been cited in the press....
, which lies to the south, it covers a total area of 922 square kilometres within the Kiev Oblast
Kiev Oblast
Kyiv Oblast, sometimes written as Kiev Oblast is an oblast in central Ukraine.The administrative center of the oblast is the city of Kyiv , also being the capital of Ukraine...
. The reservoir was formed in 1960-1966, as a result of the Kiev Hydroelectric Power Plant dam being built at Vyshhorod
Vyshhorod
Vyshhorod is a city in the Kiev Oblast , in central Ukraine. It is the administrative centre of the Vyshhorodskyi Raion , and is located along the Dnieper River upstream from the national capital, Kiev...
. The reservoir is mainly used for hydroelectricity
Hydroelectricity
Hydroelectricity is the term referring to electricity generated by hydropower; the production of electrical power through the use of the gravitational force of falling or flowing water. It is the most widely used form of renewable energy...
generation, industrial and public consumption, and irrigation.

Like all Dnieper reservoirs
Threat of the Dnieper reservoirs
The water reservoirs of the Dnieper River in Ukraine pose a significant threat of a large-scale human-made disaster if their dams fail. Such a threat is typical for reservoir dams; however, the Dnieper reservoirs are especially dangerous because of the geographical conditions, as well as the...
, Kiev reservoir poses potential threat of tremendous flooding if its dam
Dam
A dam is a barrier that impounds water or underground streams. Dams generally serve the primary purpose of retaining water, while other structures such as floodgates or levees are used to manage or prevent water flow into specific land regions. Hydropower and pumped-storage hydroelectricity are...
is destroyed. Moreover, it contains additional major threat - after the Chernobyl Nuclear Disaster
Chernobyl disaster
The Chernobyl disaster was a nuclear accident that occurred on 26 April 1986 at the Chernobyl Nuclear Power Plant in Ukraine , which was under the direct jurisdiction of the central authorities in Moscow...
in 1986, radionuclides washed away by rains badly contaminated the bottom silt
Silt
Silt is granular material of a size somewhere between sand and clay whose mineral origin is quartz and feldspar. Silt may occur as a soil or as suspended sediment in a surface water body...
of the reservoir. During the years following the disaster, there were suggestions to drain the reservoir because it was too shallow. It appeared that, if done, this could have created the threat of the tremendous amounts of radioactive dust travelling by wind, lethally affecting Europe
Europe
Europe is, by convention, one of the world's seven continents. Comprising the westernmost peninsula of Eurasia, Europe is generally 'divided' from Asia to its east by the watershed divides of the Ural and Caucasus Mountains, the Ural River, the Caspian and Black Seas, and the waterways connecting...
.

A similar threat is permanently discussed regarding the potential destruction of the reservoir's dam (as a result of natural accident or terrorist damage). But the authorities continue to dismiss such dangers as unreal, claiming to be in full control of the dam's safety. However, serious concerns were raised in 2005, when a fake terrorist
Terrorism
Terrorism is the systematic use of terror, especially as a means of coercion. In the international community, however, terrorism has no universally agreed, legally binding, criminal law definition...
alert was made.