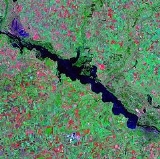 Encyclopedia
The Dniprodzerzhynsk Reservoir is a water reservoir
Reservoir
A reservoir , artificial lake or dam is used to store water.Reservoirs may be created in river valleys by the construction of a dam or may be built by excavation in the ground or by conventional construction techniques such as brickwork or cast concrete.The term reservoir may also be used to...
located on the lower part of the Dnieper River
Dnieper River
The Dnieper River is one of the major rivers of Europe that flows from Russia, through Belarus and Ukraine, to the Black Sea.The total length is and has a drainage basin of .The river is noted for its dams and hydroelectric stations...
in Ukraine
Ukraine
Ukraine is a country in Eastern Europe. It has an area of 603,628 km², making it the second largest contiguous country on the European continent, after Russia...
. Named after the city of Dniprodzerzhynsk
Dniprodzerzhynsk
Dniprodzerzhynsk is an industrial city in the Dnipropetrovsk Oblast of Ukraine, and a port on the Dnieper River.-History:The first written evidence of settlement in the territory of Dniprodzerzhynsk appeared in 1750. At that time the villages of Romankovo and Kamianske, which make the modern city,...
, it covers a total area of 567 square kilometres within the Dnipropetrovsk Oblast
Dnipropetrovsk Oblast
Dnipropetrovsk Oblast is an oblast of central Ukraine, the most important industrial region of the country. Its administrative center is Dnipropetrovsk....
. It was formed in 1963-1965. The reservoir is mainly used for generating hydroelectric power
Hydroelectricity
Hydroelectricity is the term referring to electricity generated by hydropower; the production of electrical power through the use of the gravitational force of falling or flowing water. It is the most widely used form of renewable energy...
, transportation, fish farming, and human consumption

The ports of Kremenchuk
Kremenchuk
Kremenchuk is an important industrial city in the Poltava Oblast of central Ukraine. Serving as the administrative center of the Kremenchutskyi Raion , the city itself is also designated as a separate raion within the oblast, and is located on the banks of Dnieper River.-History:Kremenchuk was...
and the Dnieper Mineral Enrichment Complex in Komsomolsk
Komsomolsk, Ukraine
Komsomolsk is a city in Poltava Oblast, Ukraine. Population is 51,740 . A picturesque small city on the left bank of the Dnieper river....
are located on the reservoir. The Dniprodzerzhynsk Hydroelectric Station, constructed during 1956–1965, is also located on the reservoir.
The source of this article is wikipedia, the free encyclopedia.  The text of this article is licensed under the GFDL.