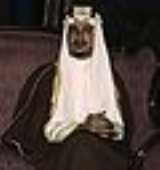 Khalid's preparation for ruling a modern state included his accompanying Faisal on foreign missions and representing Saudi Arabia at the United Nations
United Nations
The United Nations is an international organization whose stated aims are facilitating cooperation in international law, international security, economic development, social progress, human rights, and achievement of world peace...
. He was more liberal in terms of informing the press of the rationale behind foreign policy decisions.

In April 1975, his first diplomatic coup was the conclusion of a demarcation agreement concerning the Al Buraymi Oasis, where the frontiers of Abu Dhabi
Abu Dhabi
Abu Dhabi , literally Father of Gazelle, is the capital and the second largest city of the United Arab Emirates in terms of population and the largest of the seven member emirates of the United Arab Emirates. Abu Dhabi lies on a T-shaped island jutting into the Persian Gulf from the central western...
, Oman
Oman
Oman , officially called the Sultanate of Oman , is an Arab state in southwest Asia on the southeast coast of the Arabian Peninsula. It is bordered by the United Arab Emirates to the northwest, Saudi Arabia to the west, and Yemen to the southwest. The coast is formed by the Arabian Sea on the...
, and Saudi Arabia meet. Claims and counterclaims over this frontier had exacerbated relations among them for years. The conclusion of negotiations under Khalid added to his stature as a statesman.

In a reorganization of the Council of Ministers in 1975, Khalid named Crown Prince
Crown Prince
A crown prince or crown princess is the heir or heiress apparent to the throne in a royal or imperial monarchy. The wife of a crown prince is also titled crown princess....
Fahd
Fahd of Saudi Arabia
Fahd bin Abdul Aziz Al Saud, Custodian of the Two Holy Mosques, was King of Saudi Arabia from 1982 to 2005...
deputy prime minister
Prime minister
A prime minister is the most senior minister of cabinet in the executive branch of government in a parliamentary system. In many systems, the prime minister selects and may dismiss other members of the cabinet, and allocates posts to members within the government. In most systems, the prime...
. In 1976 the strains of office began to tell on Khalid, forcing him to return to the United States
United States
The United States of America is a federal constitutional republic comprising fifty states and a federal district...
for successful open-heart surgery in Cleveland, Ohio
Ohio
Ohio is a Midwestern state in the United States. The 34th largest state by area in the U.S.,it is the 7th‑most populous with over 11.5 million residents, containing several major American cities and seven metropolitan areas with populations of 500,000 or more.The state's capital is Columbus...
. Khalid asked President Carter
Jimmy Carter
James Earl "Jimmy" Carter, Jr. is an American politician who served as the 39th President of the United States and was the recipient of the 2002 Nobel Peace Prize, the only U.S. President to have received the Prize after leaving office...
to sell advanced fighter planes to Saudi Arabia to assist in countering communist aggression in the area. The delivery of the first of sixty F-15s under the agreement approved by Carter arrived in the kingdom in 1982.

He decided to bring in foreign labor to help with the country's development. A relatively easy-going but pious man, he died of a heart attack
Myocardial infarction
Myocardial infarction or acute myocardial infarction , commonly known as a heart attack, results from the interruption of blood supply to a part of the heart, causing heart cells to die...
. He had purchased a Boeing 747
Boeing 747
The Boeing 747 is a wide-body commercial airliner and cargo transport, often referred to by its original nickname, Jumbo Jet, or Queen of the Skies. It is among the world's most recognizable aircraft, and was the first wide-body ever produced...
with an operating room should he be stricken while on his travels. He was succeeded by Fahd.

The strict financial policies of his predecessor, coupled with the aftermath of the 1973 oil crisis
1973 oil crisis
The 1973 oil crisis started in October 1973, when the members of Organization of Arab Petroleum Exporting Countries or the OAPEC proclaimed an oil embargo. This was "in response to the U.S. decision to re-supply the Israeli military" during the Yom Kippur war. It lasted until March 1974. With the...
, created a financial windfall that fueled development and led to a commercial and economic boom in the country. Notable achievements included the institution of the second "Five-Year Plan" in Saudi history, which aimed to build up Saudi infrastructure and health care. He also called numerous summits and inaugurated the Gulf Co-operation Council in 1981.

King Khalid International Airport
King Khalid International Airport
King Khalid International Airport is located north of Riyadh, Saudi Arabia, designed by the architectural firm HOK.The airport includes the terminals, mosque, the control tower and two parallel runways, each long...
in Riyadh
Riyadh
Riyadh is the capital and largest city of Saudi Arabia. It is also the capital of Riyadh Province, and belongs to the historical regions of Najd and Al-Yamama. It is situated in the center of the Arabian Peninsula on a large plateau, and is home to 5,254,560 people, and the urban center of a...
and King Khalid Military City
King Khalid Military City
King Khalid Military City is a special city in northeastern Saudi Arabia and about 60 km south to Hafar Al-Batin City, designed and built by the Middle East Division, a unit of the U.S. Army Corps of Engineers, in the 1970s and 1980s. The consultants were Brown, Daltas, and Associates in...
were both named after him, and his reign is remembered fondly by Saudi citizens for the economic prosperity that began during his time on the throne.

His wife was Queen Sita. Unlike other Saudi kings, his children have assumed a low profile and hold no notable political positions. He had only one full brother, Muhammad.
The source of this article is wikipedia, the free encyclopedia.  The text of this article is licensed under the GFDL.