Encyclopedia
Kells is a town
Town
A town is a human settlement larger than a village but smaller than a city. The size a settlement must be in order to be called a "town" varies considerably in different parts of the world, so that, for example, many American "small towns" seem to British people to be no more than villages, while...
in County Meath
County Meath
County Meath is a county in Ireland. It is part of the Mid-East Region and is also located in the province of Leinster. It is named after the ancient Kingdom of Mide . Meath County Council is the local authority for the county...
, Ireland
Republic of Ireland
Ireland , described as the Republic of Ireland , is a sovereign state in Europe occupying approximately five-sixths of the island of the same name. Its capital is Dublin. Ireland, which had a population of 4.58 million in 2011, is a constitutional republic governed as a parliamentary democracy,...
. The town lies off the M3 motorway, 16 km (10 mi) from Navan
Navan
-People:Navan was the childhood home of Pierce Brosnan, who appeared in the television series Remington Steele and was the fifth film actor to play James Bond. TV personality Hector Ó hEochagáin, and comedians Dylan Moran and Tommy Tiernan also hail from Navan....
and 65 km (40 mi) from Dublin. In recent years Kells has grown greatly with many Dublin commuters moving to the town.

Until the opening of the new motorway in June 2010, Kells stood as a busy junction town on the old N3 road with over 18,000 vehicles passing through the town each day. Kells was a renowned traffic bottleneck from both the N3 national primary route (Dublin, Cavan
Cavan
Cavan is the county town of County Cavan in the Republic of Ireland. The town lies in the north central part of Ireland, near the border with Northern Ireland...
, Enniskillen
Enniskillen
Enniskillen is a town in County Fermanagh, Northern Ireland. It is located almost exactly in the centre of the county between the Upper and Lower sections of Lough Erne. It had a population of 13,599 in the 2001 Census...
and Ballyshannon
Ballyshannon
Ballyshannon is a town in County Donegal, Ireland. It is located where the N3 and N15 cross the River Erne, and claims to be the oldest town in Ireland.-Location:...
) and N52
N52 road (Ireland)
The N52 road is a national secondary road in Ireland. It links the M7 motorway from just south of Nenagh, County Tipperary to the M1 motorway north of Dundalk in County Louth.The road is long.-Quality of Road:...
national secondary route (Dundalk
Dundalk
Dundalk is the county town of County Louth in Ireland. It is situated where the Castletown River flows into Dundalk Bay. The town is close to the border with Northern Ireland and equi-distant from Dublin and Belfast. The town's name, which was historically written as Dundalgan, has associations...
, Tullamore
Tullamore
Tullamore is a town in County Offaly, in the midlands of Ireland. It is Offaly's county town and the centre of the district.Tullamore is an important commercial and industrial centre in the region. Major international employers in the town include 'Tyco Healthcare' and 'Boston Scientific'. In...
and Nenagh
Nenagh
Nenagh is the county town of North Tipperary in Ireland. It is the administrative centre of North Tipperary and in 2011 it had a recorded population of 7,995. It is a civil parish in the historical barony of Ormond Lower...
) passing though the town centre. The new M3 motorway significantly reduces the journey time to Dublin, as well as the numbers of vehicles in the town.

The name Kells derives from Kenlis, an anglicisation of the Irish language
Irish language
Irish , also known as Irish Gaelic, is a Goidelic language of the Indo-European language family, originating in Ireland and historically spoken by the Irish people. Irish is now spoken as a first language by a minority of Irish people, as well as being a second language of a larger proportion of...
word 'Ceann Lios'. Ceann Lios, meaning "head fort" appears to be another form of the name Ceannanas Mór. Kells, Kenlis and Headfort all feature in the titles taken by the Taylor family
Marquess of Headfort
Marquess of Headfort is a title in the Peerage of Ireland. It was created in 1800 for Thomas Taylor, 2nd Earl of Bective. Despite the official title, the family unfailingly use the alternative rendering Marquis of Headfort, and this is the spelling more commonly encountered in references to family...
, and all contribute to local place names. 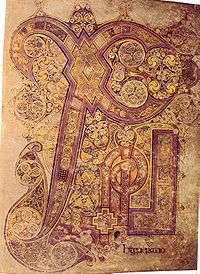 The monastery at Kells is thought to have been founded around 804 A.D. by monks fleeing from St Colmcille's Iona
Iona
Iona is a small island in the Inner Hebrides off the western coast of Scotland. It was a centre of Irish monasticism for four centuries and is today renowned for its tranquility and natural beauty. It is a popular tourist destination and a place for retreats...
monastery to escape Viking
Viking
The term Viking is customarily used to refer to the Norse explorers, warriors, merchants, and pirates who raided, traded, explored and settled in wide areas of Europe, Asia and the North Atlantic islands from the late 8th to the mid-11th century.These Norsemen used their famed longships to...
invasions.

In 1152, the Synod of Kells completed the transition of the Roman Catholic Church
Roman Catholic Church
The Catholic Church, also known as the Roman Catholic Church, is the world's largest Christian church, with over a billion members. Led by the Pope, it defines its mission as spreading the gospel of Jesus Christ, administering the sacraments and exercising charity...
of Ireland from a monastic church
Monastery
Monastery denotes the building, or complex of buildings, that houses a room reserved for prayer as well as the domestic quarters and workplace of monastics, whether monks or nuns, and whether living in community or alone .Monasteries may vary greatly in size – a small dwelling accommodating only...
to the diocesan church
Diocese
A diocese is the district or see under the supervision of a bishop. It is divided into parishes.An archdiocese is more significant than a diocese. An archdiocese is presided over by an archbishop whose see may have or had importance due to size or historical significance...
that continues today. While called the Synod of Kells, this important Synod was transferred to Mellifont, Co Louth, and held there in March 1152. Kells was raised to a Diocese by the Synod, but was later reduced to parochial status. At the end of the 12th century Hugh de Lacy was granted the whole of Meath and under the Normans
Normans
The Normans were the people who gave their name to Normandy, a region in northern France. They were descended from Norse Viking conquerors of the territory and the native population of Frankish and Gallo-Roman stock...
the religious establishments at Kells flourished.

Kells became a border town garrison of the Pale
The Pale
The Pale or the English Pale , was the part of Ireland that was directly under the control of the English government in the late Middle Ages. It had reduced by the late 15th century to an area along the east coast stretching from Dalkey, south of Dublin, to the garrison town of Dundalk...
and was the scene of many battles, between Bréifne Irish
Kingdom of Breifne
The Kingdom of Breifne or Bréifne was the traditional territory for an early Irish tribal group known as the Uí Briúin Bréifne...
and Hiberno-Norman
Hiberno-Norman
The Hiberno-Normans are those Norman lords who settled in Ireland who admitted little if any real fealty to the Anglo-Norman settlers in England, and who soon began to interact and intermarry with the Gaelic nobility of Ireland. The term embraces both their origins as a distinct community with...
s, both of whom had heavily intermarried. Since the Tudor
Tudor period
The Tudor period usually refers to the period between 1485 and 1603, specifically in relation to the history of England. This coincides with the rule of the Tudor dynasty in England whose first monarch was Henry VII...
from 1561 to 1800 Kells returned two Members of Parliament. During the rebellion of 1641, Kells was burned by the O'Reilly's during their attacks on the pale.

The period of the Great Famine saw the population of Kells drop by 38% as measured by the civil census records of 1841 and 1851. The Workhouse
Workhouse
In England and Wales a workhouse, colloquially known as a spike, was a place where those unable to support themselves were offered accommodation and employment...
and the Fever Hospital were described as full to overflowing.

The population of Kells town (according to the official 2006 Census of Population) stands at 2257 persons. This represens a slight decrease in population over the 2002 Census. There was a 24.8% increase in total population between 1996 and 2002.