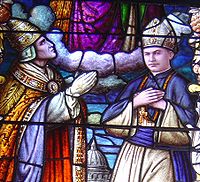 A diocese is the district or see
Episcopal See
An episcopal see is, in the original sense, the official seat of a bishop. This seat, which is also referred to as the bishop's cathedra, is placed in the bishop's principal church, which is therefore called the bishop's cathedral...
under the supervision of a bishop
Bishop
A bishop is an ordained or consecrated member of the Christian clergy who is generally entrusted with a position of authority and oversight. Within the Catholic Church, Eastern Orthodox, Oriental Orthodox Churches, in the Assyrian Church of the East, in the Independent Catholic Churches, and in the...
. It is divided into parish
Parish
A parish is a territorial unit historically under the pastoral care and clerical jurisdiction of one parish priest, who might be assisted in his pastoral duties by a curate or curates - also priests but not the parish priest - from a more or less central parish church with its associated organization...
es.

An archdiocese is more significant than a diocese. An archdiocese is presided over by an archbishop
Archbishop
An archbishop is a bishop of higher rank, but not of higher sacramental order above that of the three orders of deacon, priest , and bishop...
whose see may have or had importance due to size or historical significance. The archbishop may have metropolitan authority over any other (then 'suffragan') bishops and their dioceses within his ecclesiastical province
Ecclesiastical Province
An ecclesiastical province is a large jurisdiction of religious government, so named by analogy with a secular province, existing in certain hierarchical Christian churches, especially in the Catholic Church and Orthodox Churches and in the Anglican Communion...
.

The bishops, Greek: Episkopos, elders or overseers, of the long-established churches claim Apostolic succession, a direct historical lineage dating back to the original Twelve Apostles.

The word diocese is from the Greek
Greek language
Greek is an independent branch of the Indo-European family of languages. Native to the southern Balkans, it has the longest documented history of any Indo-European language, spanning 34 centuries of written records. Its writing system has been the Greek alphabet for the majority of its history;...
term διοίκησις, meaning "administration".

there are 630 Catholic archdioceses (including 13 patriarchate
Patriarchate
A patriarchate is the office or jurisdiction of a patriarch. A patriarch, as the term is used here, is either* one of the highest-ranking bishops in Eastern Orthodoxy, earlier, the five that were included in the Pentarchy: Rome, Constantinople, Alexandria, Antioch, and Jerusalem, but now nine,...
s, two catholicate
Catholicate
A Catholicate or Catholicosate is the area of responsibility of a catholicos, a leader within any of the several churches of Eastern Christianity, especially those regarded as Oriental Orthodoxy...
s, 536 metropolitan archdioceses, 79 single archdioceses) and 2,167 dioceses in the world.

In the Eastern Catholic Churches (which recognize papal authority and are a part of the larger Catholic Church), the equivalent unit is called an eparchy
Eparchy
Eparchy is an anglicized Greek word , authentically Latinized as eparchia and loosely translating as 'rule over something,' like province, prefecture, or territory, to have the jurisdiction over, it has specific meanings both in politics, history and in the hierarchy of the Eastern Christian...
;

The Eastern Orthodox Church calls dioceses metropoleis in the Greek tradition or eparchies in the Slavic tradition.


Church of England and Anglican Communion

Some American Lutheran synods such as the Evangelical Lutheran Church in America
Evangelical Lutheran Church in America
The Evangelical Lutheran Church in America is a mainline Protestant denomination headquartered in Chicago, Illinois. The ELCA officially came into existence on January 1, 1988, by the merging of three churches. As of December 31, 2009, it had 4,543,037 baptized members, with 2,527,941 of them...
do have a bishop acting as the head of the synod, but the synod does not have dioceses and archdioceses as the churches listed above. Rather, it is divided into a middle judicatory
Middle judicatory
A middle judicatory is an administrative structure or organization found in a religious denominations between the local congregation and the widest or highest national or international level...
.

In the Methodist Church
Methodist Church of Great Britain
The Methodist Church of Great Britain is the largest Wesleyan Methodist body in the United Kingdom, with congregations across Great Britain . It is the United Kingdom's fourth largest Christian denomination, with around 300,000 members and 6,000 churches...
(covering Great Britain and Ireland), churches are grouped together in sections. Sections are grouped together to form Circuits. Circuits are grouped together to form Districts. All of these, combined with the local membership of the Church, are referred to as the 'Connexion'. This 18th century term, endorsed by John Wesley
John Wesley
John Wesley was a Church of England cleric and Christian theologian. Wesley is largely credited, along with his brother Charles Wesley, as founding the Methodist movement which began when he took to open-air preaching in a similar manner to George Whitefield...
who remained within the Church of England, describes how people serving in different geographical centres are 'connected' to each other. The Methodist Church has an annual president. Each District is headed by a 'Chair' who oversees its functioning. Each Circuit is governed by a superintendent minister. The geographical regions covered by circuits and dioceses rarely overlap.

Most Baptists hold that no church or ecclesiastical organization has inherent authority over a Baptist church. Churches can properly relate to each other under this polity only through voluntary cooperation, never by any sort of coercion. Furthermore, this Baptist polity calls for freedom from governmental control. Most Baptists believe in "Two offices of the church"—pastor-elder and deacon—based on certain scriptures .

In the later organization of the Roman Empire
Roman Empire
The Roman Empire was the post-Republican period of the ancient Roman civilization, characterised by an autocratic form of government and large territorial holdings in Europe and around the Mediterranean....
, the increasingly subdivided provinces
Roman province
In Ancient Rome, a province was the basic, and, until the Tetrarchy , largest territorial and administrative unit of the empire's territorial possessions outside of Italy...
were administratively associated in a larger unit, the diocese
Roman diocese
A Roman or civil diocese was one of the administrative divisions of the later Roman Empire, starting with the Tetrarchy. It formed the intermediate level of government, grouping several provinces and being in turn subordinated to a praetorian prefecture....
(Latin
Latin
Latin is an Italic language originally spoken in Latium and Ancient Rome. It, along with most European languages, is a descendant of the ancient Proto-Indo-European language. Although it is considered a dead language, a number of scholars and members of the Christian clergy speak it fluently, and...
dioecesis, from the Greek
Greek language
Greek is an independent branch of the Indo-European family of languages. Native to the southern Balkans, it has the longest documented history of any Indo-European language, spanning 34 centuries of written records. Its writing system has been the Greek alphabet for the majority of its history;...
term διοίκησις, meaning "administration").

With the collapse of the Western Empire
Western Roman Empire
The Western Roman Empire was the western half of the Roman Empire after its division by Diocletian in 285; the other half of the Roman Empire was the Eastern Roman Empire, commonly referred to today as the Byzantine Empire....
in the 5th century
Christianity in the 5th century
The 5th century would see further fracturing of the State church of the Roman Empire. Emperor Theodosius II called two synods in Ephesus, one in 431 and one in 449 AD, that addressed the teachings of then-Patriarch of Constantinople Nestorius and similar teachings...
, the bishops in Western Europe assumed a large part of the role of the former Roman governors. A similar, though less pronounced, development occurred in the East, where the Roman administrative apparatus was largely retained by the Byzantine Empire
Byzantine Empire
The Byzantine Empire was the Eastern Roman Empire during the periods of Late Antiquity and the Middle Ages, centred on the capital of Constantinople. Known simply as the Roman Empire or Romania to its inhabitants and neighbours, the Empire was the direct continuation of the Ancient Roman State...
. In modern times, many diocese, though later subdivided, have preserved the boundaries of a long-vanished Roman administrative division. For Gaul, Bruce Eagles has observed that "it has long been an academic commonplace in France that the medieval dioceses, and their constituent pagi
Pagus
In the later Western Roman Empire, following the reorganization of Diocletian, a pagus became the smallest administrative district of a province....
, were the direct territorial successors of the Roman civitates
Civitas
In the history of Rome, the Latin term civitas , according to Cicero in the time of the late Roman Republic, was the social body of the cives, or citizens, united by law . It is the law that binds them together, giving them responsibilities on the one hand and rights of citizenship on the other...
.

Modern usage of 'diocese' tends to refer to the sphere of a bishop's jurisdiction. This became commonplace during the self-conscious "classicizing" structural evolution of the Carolingian empire
Carolingian Empire
Carolingian Empire is a historiographical term which has been used to refer to the realm of the Franks under the Carolingian dynasty in the Early Middle Ages. This dynasty is seen as the founders of France and Germany, and its beginning date is based on the crowning of Charlemagne, or Charles the...
in the 9th century, but this usage had itself been evolving from the much earlier parochia ("parish
Parish
A parish is a territorial unit historically under the pastoral care and clerical jurisdiction of one parish priest, who might be assisted in his pastoral duties by a curate or curates - also priests but not the parish priest - from a more or less central parish church with its associated organization...
"), dating from the increasingly formalised Christian authority structure in the 4th century (see EB 1911).