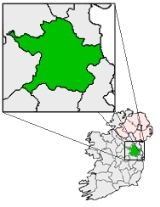 Navan was the childhood home of Pierce Brosnan
Pierce Brosnan
Pierce Brendan Brosnan, OBE is an Irish actor, film producer and environmentalist. After leaving school at 16, Brosnan began training in commercial illustration, but trained at the Drama Centre in London for three years...
, who appeared in the television series Remington Steele
Remington Steele
Remington Steele is an American television series, co-created by Robert Butler and Michael Gleason. The series, starring Stephanie Zimbalist and Pierce Brosnan, was produced by MTM Enterprises and first broadcast on the NBC network from 1982 to 1987. The series blended the genres of romantic...
and was the fifth film actor to play James Bond
James Bond
James Bond, code name 007, is a fictional character created in 1953 by writer Ian Fleming, who featured him in twelve novels and two short story collections. There have been a six other authors who wrote authorised Bond novels or novelizations after Fleming's death in 1964: Kingsley Amis,...
. TV personality Hector Ó hEochagáin
Hector Ó hEochagáin
Hector Ó hEochagáin is an Irish television and radio presenter from Navan, Co. Meath, Ireland. He currently presents Breakfast with Hector weekday mornings on RTÉ 2fm.-Career:...
, and comedians Dylan Moran
Dylan Moran
Dylan Moran is an Irish stand-up comedian, writer, actor and filmmaker. He is best known for his sardonic observational comedy, the UK television sitcom Black Books , and his work with Simon Pegg in Shaun of the Dead and Run Fatboy Run...
and Tommy Tiernan
Tommy Tiernan
Tommy Tiernan is an Irish comedian, actor and writer. He and Hector Ó hEochagáin present The Tommy and Hector Show on i102-104FM. Tiernan also featured in Father Ted.-Early life:...
also hail from Navan.

Other famous Navan people have included Sir Francis Beaufort famous for his wind scale
Beaufort scale
The Beaufort Scale is an empirical measure that relates wind speed to observed conditions at sea or on land. Its full name is the Beaufort Wind Force Scale.-History:...
. His birthplace was removed by the local council in the 1990s to make way for a road junction.

Brian Byrne, composer, is a native of Navan and is currently living in L.A. working on film and TV scores. Brian has recently reworked the theme tune for The Late Late Show
The Late Late Show
The Late Late Show, sometimes referred to as The Late Late, or in some cases by the acronym LLS, is the world's longest-running chat show by the same broadcaster and the official flagship television programme of Irish broadcasting company RTÉ...
and scored the upcoming Irish comedy movie Zonad
Zonad
Zonad is a film by John Carney and Kieran Carney that premiered in July 2009 at the Galway Film Fleadh with the directors in attendance.The film went to general release in Ireland March 19, 2010.- Plot :...
.

Entrepreneur Ian Clarke, the man behind Freenet
Freenet
Freenet is a decentralized, censorship-resistant distributed data store originally designed by Ian Clarke. According to Clarke, Freenet aims to provide freedom of speech through a peer-to-peer network with strong protection of anonymity; as part of supporting its users' freedom, Freenet is free and...
, Revver
Revver
Revver is a video sharing website that hosts user-generated content. Revver attaches advertising to user-submitted video clips and originally offered to share ad revenue with the video creators. Videos could be displayed, downloaded and shared across the web in either Apple QuickTime or FLV format...
and SenseArray is also a Navan native. 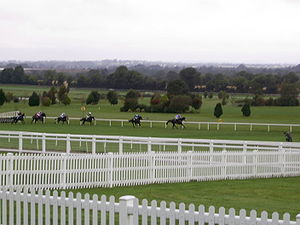 Navan is home to many sports teams which have won titles in many various sports. The town has had major success in the Meath Senior Football Championship. Pierce O'Mahony's and Navan Gaels are both defunct GAA clubs. Together they have won 14 Meath Senior Football Championship Titles. Navan O'Mahony's
Navan O'Mahonys GAA
Navan O'Mahonys is a Gaelic Athletic Association club located in the town of Navan in County Meath, Ireland. The club competes in Meath competitions. With 17 Senior Football wins they are the most successful football club in Meath...
was founded in 1948 and with 17 S.F.C titles they are the most successful football club in County Meath. Páirc Tailteann
Páirc Tailteann
Páirc Tailteann is a Gaelic Athletic Association stadium in Navan, County Meath, Ireland. It is the home of the Meath Gaelic football and Hurling teams. The ground has a capacity of between 30,000 and 33,000. It is the venue of the annual Meath GAA club championship finals of which the winners...
is located in Navan and is home of the Meath
Meath GAA
The Meath County Board of the Gaelic Athletic Association or Meath GAA is one of the 32 county boards of the GAA in Ireland, and is responsible for Gaelic games in County Meath, as well as for Meath inter-county teams.- Pre-1960s :...
Gaelic football
Gaelic football
Gaelic football , commonly referred to as "football" or "Gaelic", or "Gah" is a form of football played mainly in Ireland...
and Hurling
Hurling
Hurling is an outdoor team game of ancient Gaelic origin, administered by the Gaelic Athletic Association, and played with sticks called hurleys and a ball called a sliotar. Hurling is the national game of Ireland. The game has prehistoric origins, has been played for at least 3,000 years, and...
teams.

Knockharley Cricket Club were founded in 1982 and are the only cricket club in County Meath
County Meath
County Meath is a county in Ireland. It is part of the Mid-East Region and is also located in the province of Leinster. It is named after the ancient Kingdom of Mide . Meath County Council is the local authority for the county...
competing in the Leinster Cricket Union, the clubs most recent success came in 2006 when the 1st XI won the Middle 2 Leinster Cup defeating Mullingar at North Kildare.

Parkvilla Football Club were founded in 1966 and are the highest placed football club in Meath playing in the Leinster Senior League in Senior 1A. They have a very successful schoolboy/girl section which has consistently won the highest honours in the North Eastern Counties Schoolboy League. The club were honoured with a Civic reception by Navan Town Council in 2006 for their contribution to sport and the community in Navan. Their home ground is Claremont Stadium, Commons Road, Navan whom they co-own with Navan Athletic Club.

Other sporting facilities include:

Railway Street in Navan is the home of the Solstice Art Gallery, which is run by Meath County Council and leading art exhibitions are held there regularly.

Meath Arts Group is very active in the area.

Sniomh by Betty Newman Maguire in front of Navan Fire Station. A sculpture inspired by the movement of water and the merging of the rivers Boyne
River Boyne
The River Boyne is a river in Leinster, Ireland, the course of which is about long. It rises at Trinity Well, Newbury Hall, near Carbury, County Kildare, and flows towards the Northeast through County Meath to reach the Irish Sea between Mornington, County Meath and Baltray, County Louth. Salmon...
and Blackwater.

The Fifth Province by Richard King on the Navan Bypass. A sculpture symbolising the ideal for the cultural integration of all the people of the island of Ireland. Composed of four branches and a central upright stem that symbolises the flowering of hope and peace.