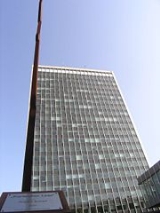 Since the founding of the Federal Republic, Karlsruhe has been the seat of the Federal Constitutional Court (Bundesverfassungsgericht), Germany's highest.

The western part of the district is located in the Rhine valley. The area in the east belongs to the landscape of the Kraichgau, and it is also to the north of the foothills of the Black Forest
Black Forest
The Black Forest is a wooded mountain range in Baden-Württemberg, southwestern Germany. It is bordered by the Rhine valley to the west and south. The highest peak is the Feldberg with an elevation of 1,493 metres ....
.

Starting in 1978 the district had a partnership with the Welsh
Wales
Wales is a country that is part of the United Kingdom and the island of Great Britain, bordered by England to its east and the Atlantic Ocean and Irish Sea to its west. It has a population of three million, and a total area of 20,779 km²...
county of Gwent
Gwent (county)
Gwent is a preserved county and a former local government county in south-east Wales. It was formed on 1 April 1974, under the Local Government Act 1972, and was named after the ancient Kingdom of Gwent....
. In 1996 Gwent was abolished, with the area split into several separate districts due to administrative reform, and the partnership has since continued with two new of these districts: Monmouthshire
Monmouthshire
Monmouthshire is a county in south east Wales. The name derives from the historic county of Monmouthshire which covered a much larger area. The largest town is Abergavenny. There are many castles in Monmouthshire .-Historic county:...
and Torfaen
Torfaen
Torfaen is a county borough in Wales within the historic boundaries of Monmouthshire. It was originally formed in 1974 as a district of the county of Gwent and in 1996 it was reconstituted as a unitary authority.-Education:...
.

Since 1990 the district has had a partnership with the Döbeln
Döbeln (district)
Döbeln is a former district in the Free State of Saxony, Germany. It was bounded by the districts of Torgau-Oschatz, Riesa-Großenhain, Meißen, Mittweida and Muldentalkreis.- History :...
district in Saxony
Saxony
The Free State of Saxony is a landlocked state of Germany, contingent with Brandenburg, Saxony Anhalt, Thuringia, Bavaria, the Czech Republic and Poland. It is the tenth-largest German state in area, with of Germany's sixteen states....
, and since 1992 with the Sha'ar HaNegev Regional Council
Sha'ar HaNegev Regional Council
The Sha'ar HaNegev Regional Council , is a regional council in the north-western Negev, in Israel's Southern District. The Regional Council's territory lies midway between Beersheba and Ashkelon, bounded on the west by the Gaza Strip. The eastern border abuts Bnei Shimon...
in Israel
Israel
The State of Israel is a parliamentary republic located in the Middle East, along the eastern shore of the Mediterranean Sea...
. 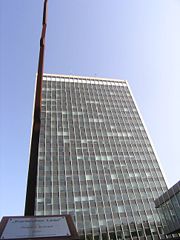