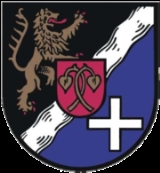 Encyclopedia
The Rhein-Pfalz-Kreis is a district (Kreis) in the east of Rhineland-Palatinate
Rhineland-Palatinate
Rhineland-Palatinate is one of the 16 states of the Federal Republic of Germany. It has an area of and about four million inhabitants. The capital is Mainz. English speakers also commonly refer to the state by its German name, Rheinland-Pfalz ....
, Germany
Germany
Germany , officially the Federal Republic of Germany , is a federal parliamentary republic in Europe. The country consists of 16 states while the capital and largest city is Berlin. Germany covers an area of 357,021 km2 and has a largely temperate seasonal climate...
.

The district was created in 1886 under the name Bezirksamt Ludwigshafen, one of the last acts of king Ludwig II of Bavaria
Ludwig II of Bavaria
Ludwig II was King of Bavaria from 1864 until shortly before his death. He is sometimes called the Swan King and der Märchenkönig, the Fairy tale King...
. The population in the area around Speyer had grown significantly, which made the splitting of the Bezirksamt Speyer necessary. In 1969, the Speyer and Ludwigshafen districts and parts of the Frankenthal and Neustadt districts were merged again to form the new Ludwigshafen district.

On May 19, 2003 the district parliament passed a resolution to rename the district "Rhein-Pfalz-Kreis" starting in 2004.

The district is located in the valley of the Rhine river, both the actual river valley and the Vorderpfälzer Tiefland, formed by the sediments of the rivers of the Palatinate hills. The district has a very warm climate, together with the fertile loess
Loess
Loess is an aeolian sediment formed by the accumulation of wind-blown silt, typically in the 20–50 micrometre size range, twenty percent or less clay and the balance equal parts sand and silt that are loosely cemented by calcium carbonate...
soil it makes the area favourable for growing vegetable. However the rainfall is comparatively low, thus irrigation
Irrigation
Irrigation may be defined as the science of artificial application of water to the land or soil. It is used to assist in the growing of agricultural crops, maintenance of landscapes, and revegetation of disturbed soils in dry areas and during periods of inadequate rainfall...
is needed. 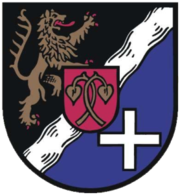 The wavy line from the bottom-right to the top-left symbolizes the Rhine river.

The lion in the left is the lion of the Palatinate, to which the largest part of the district belonged historically.

The silver cross in the right part is taken from the State of Speyer
Speyer
Speyer is a city of Rhineland-Palatinate, Germany with approximately 50,000 inhabitants. Located beside the river Rhine, Speyer is 25 km south of Ludwigshafen and Mannheim. Founded by the Romans, it is one of Germany's oldest cities...
, taken from the coat of arms of the Speyer district.

The shield in the middle show water lily
Nymphaeaceae
Nymphaeaceae is a family of flowering plants. Members of this family are commonly called water lilies and live in freshwater areas in temperate and tropical climates around the world. The family contains eight genera. There are about 70 species of water lilies around the world. The genus...
leaves, a typical symbol for the district, as this plant grows in the old arms of the Rhine river.