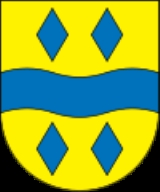 The south of the Enz district covers the northern part of the Black Forest
Black Forest
The Black Forest is a wooded mountain range in Baden-Württemberg, southwestern Germany. It is bordered by the Rhine valley to the west and south. The highest peak is the Feldberg with an elevation of 1,493 metres ....
. In the north-west of the district is the Kraichgau, a mainly agricultural area. The main river is the Enz, a tributary of the Neckar
Neckar
The Neckar is a long river, mainly flowing through the southwestern state of Baden-Württemberg, but also a short section through Hesse, in Germany. The Neckar is a major right tributary of the River Rhine...
.

Since March 1993 the district has an official partnership with the Italian
Italy
Italy , officially the Italian Republic languages]] under the European Charter for Regional or Minority Languages. In each of these, Italy's official name is as follows:;;;;;;;;), is a unitary parliamentary republic in South-Central Europe. To the north it borders France, Switzerland, Austria and...
province Reggio Emilia
Reggio Emilia
Reggio Emilia is an affluent city in northern Italy, in the Emilia-Romagna region. It has about 170,000 inhabitants and is the main comune of the Province of Reggio Emilia....
. Since 1996 the district has a partnership with the Polish
Poland
Poland , officially the Republic of Poland , is a country in Central Europe bordered by Germany to the west; the Czech Republic and Slovakia to the south; Ukraine, Belarus and Lithuania to the east; and the Baltic Sea and Kaliningrad Oblast, a Russian exclave, to the north...
city Mysłowice. As two municipalities left the city in a communal reform in 1995, the partnership also includes Imielin
Imielin
Imielin is a small town in Silesia in southern Poland, near Katowice. Borders on the Upper Silesian Metropolitan Union - metropolis with the population of 2 millions. Located in the Silesian Highlands....
and Chelm Slaski
Chelm Slaski
Chełm Śląski is a village in Bieruń-Lędziny County, Silesian Voivodeship, in southern Poland. It is the seat of the gmina called Gmina Chełm Śląski. It lies approximately east of Bieruń and south-east of the regional capital Katowice.The village has a population of 5,646.-References:...
. In March 2001 the Enz district together with the city Pforzheim started a friendship with the Hungarian
Hungary
Hungary , officially the Republic of Hungary , is a landlocked country in Central Europe. It is situated in the Carpathian Basin and is bordered by Slovakia to the north, Ukraine and Romania to the east, Serbia and Croatia to the south, Slovenia to the southwest and Austria to the west. The...
Komitat Györ-Moson-Sopron.