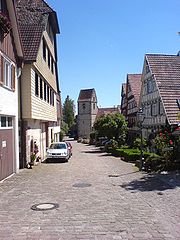 The district belongs to the northern part of the Black Forest
Black Forest
The Black Forest is a wooded mountain range in Baden-Württemberg, southwestern Germany. It is bordered by the Rhine valley to the west and south. The highest peak is the Feldberg with an elevation of 1,493 metres ....
mountains. The main river is the Nagold and the Enz.

Since 1991 the district has partnership with the district Freiberg
Freiberg (district)
Freiberg is a former district in the Free State of Saxony, Germany. It was bounded by the district of Mittlerer Erzgebirgskreis, the city of Chemnitz, the districts of Mittweida, Meißen and Weißeritzkreis, and by the Czech Republic.- History :The district was established in 1994 by merging the...
in Saxony
Saxony
The Free State of Saxony is a landlocked state of Germany, contingent with Brandenburg, Saxony Anhalt, Thuringia, Bavaria, the Czech Republic and Poland. It is the tenth-largest German state in area, with of Germany's sixteen states....
.