Encyclopedia
Jūrmala is a city
City
A city is a relatively large and permanent settlement. Although there is no agreement on how a city is distinguished from a town within general English language meanings, many cities have a particular administrative, legal, or historical status based on local law.For example, in the U.S...
in Latvia
Latvia
Latvia , officially the Republic of Latvia , is a country in the Baltic region of Northern Europe. It is bordered to the north by Estonia , to the south by Lithuania , to the east by the Russian Federation , to the southeast by Belarus and shares maritime borders to the west with Sweden...
, about 25 kilometers west of Riga
Riga
Riga is the capital and largest city of Latvia. With 702,891 inhabitants Riga is the largest city of the Baltic states, one of the largest cities in Northern Europe and home to more than one third of Latvia's population. The city is an important seaport and a major industrial, commercial,...
. Jūrmala is a resort
Seaside resort
A seaside resort is a resort, or resort town, located on the coast. Where a beach is the primary focus for tourists, it may be called a beach resort.- Overview :...
town stretching 32 kilometres (20 mi) and sandwiched between the Gulf of Riga and the Lielupe River. It has a 33 km stretch of white-sand beach, and a population of 55,580, making it the fifth largest city in Latvia.
While Latvia was a part of the Soviet Union
Soviet Union
The Soviet Union , officially the Union of Soviet Socialist Republics , was a constitutionally socialist state that existed in Eurasia between 1922 and 1991....
, Jūrmala was a favorite holiday-resort and tourist destination for high-level Communist Party officials, particularly Leonid Brezhnev
Leonid Brezhnev
Leonid Ilyich Brezhnev  – 10 November 1982) was the General Secretary of the Central Committee of the Communist Party of the Soviet Union , presiding over the country from 1964 until his death in 1982. His eighteen-year term as General Secretary was second only to that of Joseph Stalin in...
and Nikita Khrushchev
Nikita Khrushchev
Nikita Sergeyevich Khrushchev led the Soviet Union during part of the Cold War. He served as First Secretary of the Communist Party of the Soviet Union from 1953 to 1964, and as Chairman of the Council of Ministers, or Premier, from 1958 to 1964...
. Although many amenities such as beach-houses and concrete hotels remain, some have fallen into disrepair. Jūrmala remains a tourist attraction with long beaches facing the Gulf of Riga
Gulf of Riga
The Gulf of Riga, or Bay of Riga, is a bay of the Baltic Sea between Latvia and Estonia. According to C.Michael Hogan, a saline stratification layer is found at a depth of approximately seventy metres....
and romantic wooden houses in the Art Nouveau
Art Nouveau
Art Nouveau is an international philosophy and style of art, architecture and applied art—especially the decorative arts—that were most popular during 1890–1910. The name "Art Nouveau" is French for "new art"...
style.

Visitors can access Jūrmala from Riga by suburban rail (30 min) or along the highway by car (20 min). Since 2008 Jūrmala and Riga airport are connected with a bus service.

In publications dating from the Soviet period, the city name was occasionally spelled in English as Yurmala, a back-transliteration from Russian.

The area now comprising the city of Jūrmala was formerly part of Riga, known as Rīgas Jūrmala. Some parts of the area, like Sloka and Ķemeri, have been known as health resorts
Spa town
A spa town is a town situated around a mineral spa . Patrons resorted to spas to "take the waters" for their purported health benefits. The word comes from the Belgian town Spa. In continental Europe a spa was known as a ville d'eau...
for centuries. Jūrmala was once known in German
German language
German is a West Germanic language, related to and classified alongside English and Dutch. With an estimated 90 – 98 million native speakers, German is one of the world's major languages and is the most widely-spoken first language in the European Union....
as Riga-Strand, or "Beach of Riga".

Jūrmala's reputation as a spa destination began in the late 18th and early 19th centuries. Wealthy landowners began the tradition of relaxing at the seaside, and Russian army officers came here to rest after the Napoleonic Wars, returning later with their families. The peak of the Jūrmala area's development was the opening of the Riga - Tukums railway in 1877 (which still passes through Jūrmala) that gave a great boost to the numbers of visitors, and thus a boost to the development of the town as a resort. Jūrmala also gained a reputation as a health spa. The sea breeze, pine aroma, mineral springs, and sandy beach encouraged many sanatoriums to develop within the city.

In Soviet times Jūrmala was popular with the Communist officials because of its beach and sanatoriums - holidays were also given as rewards for top union members. It became one of the most popular holiday destinations in the whole Union. The spas offered facilities from mud baths to riding therapy and hiking in the woods. In summer there are many concerts.

Jūrmala gained official status as a city in 1959. The railway line became electrified and today it features the most regular train service in Latvia.

Whereas Riga
Riga
Riga is the capital and largest city of Latvia. With 702,891 inhabitants Riga is the largest city of the Baltic states, one of the largest cities in Northern Europe and home to more than one third of Latvia's population. The city is an important seaport and a major industrial, commercial,...
has advanced rapidly to embrace and cater for growing numbers of Western tourists, Jūrmala has lagged behind. Russians are now subject to strict visa requirements and its beaches have yet to attract significant numbers of Europeans leaving the tourist industry with a hard task on its hands. However, during the past few years, Jūrmala has started to recover. Many Russian celebrities, successful businessmen and others have been buying houses near the beach, and lots of different festivals and other activities have brought more and more people to the town each summer. At the moment, Jūrmala has almost achieved the popularity that it experienced by the Soviet elite. 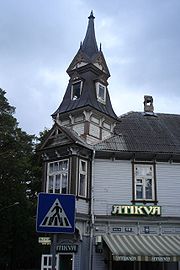 The main beach at Majori and another at Bulduri now bear blue eco-flags signaling their safety to swim in, and the Latvian Academy of Science boasts a hotel for its members in the town. There is also the Midsummer Festival in June, celebrating the longest day of the year. The 'Jaunais Vilnis' New Wave (competition)
New Wave (competition)
New Wave is an international contest for new stars, which usually lasts for six days: 3 contest days, 2 special event days and, at the end, the day where the contest's results are announced followed by an ending concert....
http://www.newwavestars.com/en/ music festival showcases the latest music from all over Europe. The Lonely Planet
Lonely Planet
Lonely Planet is the largest travel guide book and digital media publisher in the world. The company is owned by BBC Worldwide, which bought a 75% share from the founders Maureen and Tony Wheeler in 2007 and the final 25% in February 2011...
guide to the region states that it is one of the highlights of Latvia.

The most distinguishing architectural feature in Jurmala is the prevalence of wooden houses dating from the 19th and first half of the 20th century. Most of the buildings were built by Baltic German
Baltic German
The Baltic Germans were mostly ethnically German inhabitants of the eastern shore of the Baltic Sea, which today form the countries of Estonia and Latvia. The Baltic German population never made up more than 10% of the total. They formed the social, commercial, political and cultural élite in...
and Latvian architects, but there also are works of Russian, Finnish and other architects. Jurmala's architecture typically falls into classicism, national romanticism, and modern styles. The town has an official list of 414 historical buildings under protection, as well as over 4,000 wooden structures.

Jurmala's beach is 33 km long, covered with white quartz sand. The shallow coastal waters are suitable and safe for children. The beach is equipped with playgrounds, small benches, football fields and volleyball courts, as well as descents for prams and wheelchairs. In Spring and Autumn amber pieces can be found on the beach.

Each region's beach has its own character. In Majori
Majori
Majori is the central district in the city of Jūrmala, Latvia. The area is well known tourist destination famous for its spa hotels, turn of the century manor houses as well as cultural activities and festivals.The notable landmarks in Majori are:...
and Bulduri
Bulduri
Bulduri is a residential area and neighbourhood of the city Jūrmala, Latvia....
, where the Blue Flag
Blue Flag beach
The Blue Flag is a certification by the Foundation for Environmental Education that a beach or marina meets its stringent standards.The Blue Flag is a trademark owned by FEE which is a not-for-profit, non-governmental organisation consisting of 65 organisations in 60 member countries in Europe,...
flies, it is possible to rent water bicycles or relax in the beach cafe. In Dubulti and Dzintari competitions in beach football and volleyball take place, but on Pumpuri beach there is kite surfing and windsurfing.

International water sports contests, including rowing
Rowing (sport)
Rowing is a sport in which athletes race against each other on rivers, on lakes or on the ocean, depending upon the type of race and the discipline. The boats are propelled by the reaction forces on the oar blades as they are pushed against the water...
, sailing
Sailing
Sailing is the propulsion of a vehicle and the control of its movement with large foils called sails. By changing the rigging, rudder, and sometimes the keel or centre board, a sailor manages the force of the wind on the sails in order to move the boat relative to its surrounding medium and...
, and waterskiing that take place on the river Lielupe.

During the Soviet
Soviet Union
The Soviet Union , officially the Union of Soviet Socialist Republics , was a constitutionally socialist state that existed in Eurasia between 1922 and 1991....
era, Jūrmala was a venue for various festivals, the most notable of which were the annual Jurmala Chess Festival and the pop music festival "Jūrmala" (1986–1993).

Since 2001 Jūrmala has hosted a competition for young pop singers "New Wave" from all over Europe. Jurmala also hosts the "Singing KiViN" KVN
KVN
KVN is a Russian humour TV show and competition where teams compete by giving funny answers to questions and showing prepared sketches. The programme was first aired by the First Soviet Channel on November 8, 1961...
each July.

The Jūrmala International Piano Competition, arranged by the City Council and the Latvian Piano Teachers Association in collaboration with Ministry of Culture of Latvia, for pianists of all nationalities aged 19 years and under, was established in 1994 and is held every two years in the "Dzintari" concert hall. As the International Academic Music Competition (with various categories) it reached its 11th Season in 2010.