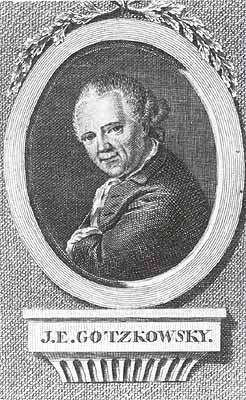 Johann Ernst Gotzkowsky was a Prussian
Kingdom of Prussia
The Kingdom of Prussia was a German kingdom from 1701 to 1918. Until the defeat of Germany in World War I, it comprised almost two-thirds of the area of the German Empire...
merchant
Merchant
A merchant is a businessperson who trades in commodities that were produced by others, in order to earn a profit.Merchants can be one of two types:# A wholesale merchant operates in the chain between producer and retail merchant...
with a successful trade in trinkets, silk
Silk
Silk is a natural protein fiber, some forms of which can be woven into textiles. The best-known type of silk is obtained from the cocoons of the larvae of the mulberry silkworm Bombyx mori reared in captivity...
, taft
Taffeta
Taffeta is a crisp, smooth plain woven fabric made from silk or synthetic fibers. The word is Persian in origin, and means "twisted woven." It is considered to be a "high end" fabric, suitable for use in ball gowns, wedding dresses, and in interiors for curtains or wallcovering. There are two...
and porcelain
Porcelain
Porcelain is a ceramic material made by heating raw materials, generally including clay in the form of kaolin, in a kiln to temperatures between and...
. A relief
Relief
Relief is a sculptural technique. The term relief is from the Latin verb levo, to raise. To create a sculpture in relief is thus to give the impression that the sculpted material has been raised above the background plane...
on Meissen porcelain
Meissen porcelain
Meissen porcelain or Meissen china is the first European hard-paste porcelain that was developed from 1708 by Ehrenfried Walther von Tschirnhaus. After his death that October, Johann Friedrich Böttger, continued his work and brought porcelain to the market...
introduced in 1740s was named after him. Moreover he acted as a diplomat
Diplomat
A diplomat is a person appointed by a state to conduct diplomacy with another state or international organization. The main functions of diplomats revolve around the representation and protection of the interests and nationals of the sending state, as well as the promotion of information and...
and art dealer. Gotzkowsky traded in paintings till 1775, but it is said he died impoverished with leaving of an autobiography: Geschichte eines patriotischen Kaufmanns, with a French
French language
French is a Romance language spoken as a first language in France, the Romandy region in Switzerland, Wallonia and Brussels in Belgium, Monaco, the regions of Quebec and Acadia in Canada, and by various communities elsewhere. Second-language speakers of French are distributed throughout many parts...
translation and three reprints in the 18th century.

Born in Konitz (Chojnice)
Chojnice
Chojnice is a town in northern Poland with 39 670 inhabitants , near famous Tuchola Forest, Lake Charzykowskie and many other water reservoirs. It is the capital of the Chojnice County....
in Royal Prussia
Royal Prussia
Royal Prussia was a Region of the Kingdom of Poland and of the Polish-Lithuanian Commonwealth . Polish Prussia included Pomerelia, Chełmno Land , Malbork Voivodeship , Gdańsk , Toruń , and Elbląg . It is distinguished from Ducal Prussia...
, Gotzkowsky descended from an impoverished family of Polish nobility
Szlachta
The szlachta was a legally privileged noble class with origins in the Kingdom of Poland. It gained considerable institutional privileges during the 1333-1370 reign of Casimir the Great. In 1413, following a series of tentative personal unions between the Grand Duchy of Lithuania and the Kingdom of...
. His parents died when he was five years as a result of the plague, which broke out after the Great Northern War
Great Northern War
The Great Northern War was a conflict in which a coalition led by the Tsardom of Russia successfully contested the supremacy of the Swedish Empire in northern Central Europe and Eastern Europe. The initial leaders of the anti-Swedish alliance were Peter I the Great of Russia, Frederick IV of...
. Gotzkowsky grew up with relatives in Dresden
Dresden
Dresden is the capital city of the Free State of Saxony in Germany. It is situated in a valley on the River Elbe, near the Czech border. The Dresden conurbation is part of the Saxon Triangle metropolitan area....
. As a 14-year-old he traveled to Berlin
Berlin
Berlin is the capital city of Germany and is one of the 16 states of Germany. With a population of 3.45 million people, Berlin is Germany's largest city. It is the second most populous city proper and the seventh most populous urban area in the European Union...
; his brother established him in his jewel and trinket shop. He quickly acquired customers in the highest circles. In 1745, he married the daughter of a rich lace maker. Gotzkowsky persuaded his father-in-law to start a velvet factory, which he inherited some years later.

King Frederick II of Prussia
Frederick II of Prussia
Frederick II was a King in Prussia and a King of Prussia from the Hohenzollern dynasty. In his role as a prince-elector of the Holy Roman Empire, he was also Elector of Brandenburg. He was in personal union the sovereign prince of the Principality of Neuchâtel...
commissioned Gotzkowsky to promote the silk
Silk
Silk is a natural protein fiber, some forms of which can be woven into textiles. The best-known type of silk is obtained from the cocoons of the larvae of the mulberry silkworm Bombyx mori reared in captivity...
trade to compete with France; Gotzkowsky ran a silk factory employing 1,500 persons. Frederick also followed his recommendations in the field of toll levies and import restrictions. Moreover, Gotzkowsky supplied the Prussian army
Prussian Army
The Royal Prussian Army was the army of the Kingdom of Prussia. It was vital to the development of Brandenburg-Prussia as a European power.The Prussian Army had its roots in the meager mercenary forces of Brandenburg during the Thirty Years' War...
and entered into consultation with Russian
Imperial Russian Army
The Imperial Russian Army was the land armed force of the Russian Empire, active from around 1721 to the Russian Revolution of 1917. In the early 1850s, the Russian army consisted of around 938,731 regular soldiers and 245,850 irregulars . Until the time of military reform of Dmitry Milyutin in...
and Austrian army leaders, especially after the Prussian defeat at Kunersdorf
Battle of Kunersdorf
The Battle of Kunersdorf, fought in the Seven Year's War, was Frederick the Great's most devastating defeat. On August 12, 1759, near Kunersdorf , east of Frankfurt , 50,900 Prussians were defeated by a combined allied army 59,500 strong consisting of 41,000 Russians and 18,500 Austrians under...
. Gotzkowsky traveled to Königsberg
Königsberg
Königsberg was the capital of East Prussia from the Late Middle Ages until 1945 as well as the northernmost and easternmost German city with 286,666 inhabitants . Due to the multicultural society in and around the city, there are several local names for it...
as a guarantor for the redemption money.

In 1761, Gotzkowsky took over the porcelain
Porcelain
Porcelain is a ceramic material made by heating raw materials, generally including clay in the form of kaolin, in a kiln to temperatures between and...
factory of Wilhelm Caspar Wegely, which had struggled because of the Seven Years' War
Seven Years' War
The Seven Years' War was a global military war between 1756 and 1763, involving most of the great powers of the time and affecting Europe, North America, Central America, the West African coast, India, and the Philippines...
. Gotzkowsky attracted competent staff from Meissen
Meissen
Meissen is a town of approximately 30,000 about northwest of Dresden on both banks of the Elbe river in the Free State of Saxony, in eastern Germany. Meissen is the home of Meissen porcelain, the Albrechtsburg castle, the Gothic Meissen Cathedral and the Meissen Frauenkirche...
, which was occupied in 1760 by the Prussian army. Already in 1763, he had difficulty paying as a result of buying up Russian
Russian Empire
The Russian Empire was a state that existed from 1721 until the Russian Revolution of 1917. It was the successor to the Tsardom of Russia and the predecessor of the Soviet Union...
grain of bad quality and too high prices, causing the infamous Amsterdam
Amsterdam
Amsterdam is the largest city and the capital of the Netherlands. The current position of Amsterdam as capital city of the Kingdom of the Netherlands is governed by the constitution of August 24, 1815 and its successors. Amsterdam has a population of 783,364 within city limits, an urban population...
company De Neufville to go broke. As a result bankruptcies in Hamburg
Hamburg
-History:The first historic name for the city was, according to Claudius Ptolemy's reports, Treva.But the city takes its modern name, Hamburg, from the first permanent building on the site, a castle whose construction was ordered by the Emperor Charlemagne in AD 808...
(90), Frankfurt
Frankfurt
Frankfurt am Main , commonly known simply as Frankfurt, is the largest city in the German state of Hesse and the fifth-largest city in Germany, with a 2010 population of 688,249. The urban area had an estimated population of 2,300,000 in 2010...
(30), and Amsterdam (25) followed, leading to an international financial crisis. He died in Berlin
Berlin
Berlin is the capital city of Germany and is one of the 16 states of Germany. With a population of 3.45 million people, Berlin is Germany's largest city. It is the second most populous city proper and the seventh most populous urban area in the European Union...
.

A focal point of Berlin society during the war years was the residence of Gotzkowsky, whose gardens and paintings were admired both by the old nobility and new bourgeoisie. In 1764 James Boswell
James Boswell
James Boswell, 9th Laird of Auchinleck was a lawyer, diarist, and author born in Edinburgh, Scotland; he is best known for the biography he wrote of one of his contemporaries, the English literary figure Samuel Johnson....
came to him on a visit and called him: a gallant German, stupid, comely, cordial. In 1767 Gotzkowsky went bankrupt for the second time.

Frederick the Great, who supported Gotzkowsky from 1740, and had him buy Dutch and Italian paintings, took over the factory. The company is still known as the Royal Porcelain Manufacture
Royal Porcelain Manufacture Berlin
The Royal Porcelain Manufacture Berlin was founded in 1763 by Frederick II of Prussia...
(KPM
KPM
KPM is an acronym or abbreviation for:* The King's Police Medal for Gallantry* The Knuth–Pratt–Morris algorithm* Kingston Process Metallurgy Inc...
). The manufacture was located in the Leipziger Strasse, not far from Potsdamer Platz
Potsdamer Platz
Potsdamer Platz is an important public square and traffic intersection in the centre of Berlin, Germany, lying about one kilometre south of the Brandenburg Gate and the Reichstag , and close to the southeast corner of the Tiergarten park...
where now the Bundesrat of Germany
Bundesrat of Germany
The German Bundesrat is a legislative body that represents the sixteen Länder of Germany at the federal level...
has lodging. The factory had twelve furnaces and 400 men in service. Frederick demanded of the Jewish traders to take his porcelain in their assortment. The former silk and porcelain factory was from 1825 up to 1851 in the possession of Abraham Mendelssohn Bartholdy
Abraham Mendelssohn Bartholdy
Abraham Ernst Mendelssohn Bartholdy was a German Jewish banker and philanthropist...
, who had built a very representative mansion on the property. From 1871 there the Reichstag
Reichstag (building)
The Reichstag building is a historical edifice in Berlin, Germany, constructed to house the Reichstag, parliament of the German Empire. It was opened in 1894 and housed the Reichstag until 1933, when it was severely damaged in a fire. During the Nazi era, the few meetings of members of the...
stood, during the German Empire
German Empire
The German Empire refers to Germany during the "Second Reich" period from the unification of Germany and proclamation of Wilhelm I as German Emperor on 18 January 1871, to 1918, when it became a federal republic after defeat in World War I and the abdication of the Emperor, Wilhelm II.The German...
.