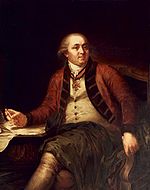 Ivan Yegorovich Starov (1745–1808) was a Russia
Russia
Russia or , officially known as both Russia and the Russian Federation , is a country in northern Eurasia. It is a federal semi-presidential republic, comprising 83 federal subjects...
n architect from St. Petersburg
Saint Petersburg
Saint Petersburg is a city and a federal subject of Russia located on the Neva River at the head of the Gulf of Finland on the Baltic Sea...
who devised the master plans for Yaroslavl
Yaroslavl
Yaroslavl is a city and the administrative center of Yaroslavl Oblast, Russia, located northeast of Moscow. The historical part of the city, a World Heritage Site, is located at the confluence of the Volga and the Kotorosl Rivers. It is one of the Golden Ring cities, a group of historic cities...
, Voronezh
Voronezh
Voronezh is a city in southwestern Russia, the administrative center of Voronezh Oblast. It is located on both sides of the Voronezh River, away from where it flows into the Don. It is an operating center of the Southeastern Railway , as well as the center of the Don Highway...
, Pskov
Pskov
Pskov is an ancient city and the administrative center of Pskov Oblast, Russia, located in the northwest of Russia about east from the Estonian border, on the Velikaya River. Population: -Early history:...
, Dnipropetrovsk
Dnipropetrovsk
Dnipropetrovsk or Dnepropetrovsk formerly Yekaterinoslav is Ukraine's third largest city with one million inhabitants. It is located southeast of Ukraine's capital Kiev on the Dnieper River, in the south-central region of the country...
, Mykolaiv
Mykolaiv
Mykolaiv , also known as Nikolayev , is a city in southern Ukraine, administrative center of the Mykolaiv Oblast. Mykolaiv is the main ship building center of the Black Sea, and, arguably, the whole Eastern Europe.-Name of city:...
, and many other towns in Russia and Ukraine
Ukraine
Ukraine is a country in Eastern Europe. It has an area of 603,628 km², making it the second largest contiguous country on the European continent, after Russia...
. His radial urban master plan for Yaroslavl, cleverly highlighting dozens historic churches and towers, is recognized as one of the World Heritage Site
World Heritage Site
A UNESCO World Heritage Site is a place that is listed by the UNESCO as of special cultural or physical significance...
s.

Starov was one of the first graduates of the Moscow University College (1755–1758) and of the Imperial Academy of Arts
Imperial Academy of Arts
The Russian Academy of Arts, informally known as the St. Petersburg Academy of Arts, was founded in 1757 by Ivan Shuvalov under the name Academy of the Three Noblest Arts. Catherine the Great renamed it the Imperial Academy of Arts and commissioned a new building, completed 25 years later in 1789...
(1758–1762). He continued his education in Paris
Paris
Paris is the capital and largest city in France, situated on the river Seine, in northern France, at the heart of the Île-de-France region...
(1762–1767) and Rome
Rome
Rome is the capital of Italy and the country's largest and most populated city and comune, with over 2.7 million residents in . The city is located in the central-western portion of the Italian Peninsula, on the Tiber River within the Lazio region of Italy.Rome's history spans two and a half...
(1767–1768), becoming apprenticed to Charles De Wailly
Charles De Wailly
Charles De Wailly was a French architect and urbanist, and furniture designer, one of the principals in the Neoclassical revival of the Antique. His major work was the Théâtre de l'Odéon for the Comédie-Française...
and other fashionable architects of his day. Back in Russia, he delivered lectures in the Academy of Arts, which nominated him academician (1769) and professor (1785). Starov held the post of the principal architect of St. Petersburg between 1772 and 1774. After that, he worked extensively for Prince Potemkin, helping him to found the major cities of New Russia.

Apart from urban planning, Starov was a leading representative of the early neoclassical architecture
Neoclassicism
Neoclassicism is the name given to Western movements in the decorative and visual arts, literature, theatre, music, and architecture that draw inspiration from the "classical" art and culture of Ancient Greece or Ancient Rome...
in Russia. His major projects chronicle the transition of national architecture
Russian architecture
Russian architecture follows a tradition whose roots were established in the Eastern Slavic state of Kievan Rus'. After the fall of Kiev, Russian architectural history continued in the principalities of Vladimir-Suzdal, Novgorod, the succeeding states of the Tsardom of Russia, the Russian Empire,...
from the late Rinaldiesque baroque of the 1760s to the magnificent Neoclassical palaces of the 1780s:


The Kherson Cathedral
St. Catherine's Cathedral, Kherson
The Cathedral of St. Catherine is a religious building in the fortress of Kherson, Ukraine. Built in 1781-1786, it was one of the earliest churches in New Russia. It is a domed sandstone structure with a Tuscan portico and heavily rusticated walls...
in Ukraine
Ukraine
Ukraine is a country in Eastern Europe. It has an area of 603,628 km², making it the second largest contiguous country on the European continent, after Russia...
and the Homel Palace in Belarus
Belarus
Belarus , officially the Republic of Belarus, is a landlocked country in Eastern Europe, bordered clockwise by Russia to the northeast, Ukraine to the south, Poland to the west, and Lithuania and Latvia to the northwest. Its capital is Minsk; other major cities include Brest, Grodno , Gomel ,...
are also frequently attributed to Starov.