Prince Grigory Potemkin of Tauride commissioned his favourite architect, Ivan Starov
Ivan Starov
Ivan Yegorovich Starov was a Russian architect from St. Petersburg who devised the master plans for Yaroslavl, Voronezh, Pskov, Dnipropetrovsk, Mykolaiv, and many other towns in Russia and Ukraine...
, to design his city residence in a rigorous Palladian style. Starov's design called for an extensive park
Park
A park is a protected area, in its natural or semi-natural state, or planted, and set aside for human recreation and enjoyment, or for the protection of wildlife or natural habitats. It may consist of rocks, soil, water, flora and fauna and grass areas. Many parks are legally protected by...
and harbour in front of the palace, which would be linked with the Neva River
Neva River
The Neva is a river in northwestern Russia flowing from Lake Ladoga through the western part of Leningrad Oblast to the Neva Bay of the Gulf of Finland. Despite its modest length , it is the third largest river in Europe in terms of average discharge .The Neva is the only river flowing from Lake...
by a canal. Building work began in 1783 and lasted for six years. Considered the grandest nobleman's residence of 18th-century Russia, Tauride Palace served as a model for innumerable manors scattered across the Russian Empire
Russian Empire
The Russian Empire was a state that existed from 1721 until the Russian Revolution of 1917. It was the successor to the Tsardom of Russia and the predecessor of the Soviet Union...
.

Shortly before his death, on April 28, 1791, Potemkin used the palace to host unprecedented festivities and illuminations with the purpose of winning the Empress's waning affections. The ball was described by Gavrila Derzhavin in the longest of his compositions. Notwithstanding all the expenses, Potemkin failed in his ambition and departed for Iaşi
Iasi
Iași is the second most populous city and a municipality in Romania. Located in the historical Moldavia region, Iași has traditionally been one of the leading centres of Romanian social, cultural, academic and artistic life...
in despair. 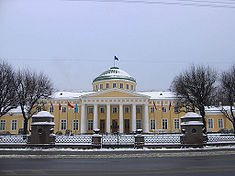 After the owner's death several months later, Catherine II
Catherine II of Russia
Catherine II, also known as Catherine the Great , Empress of Russia, was born in Stettin, Pomerania, Prussia on as Sophie Friederike Auguste von Anhalt-Zerbst-Dornburg...
purchased his palace and ordered architect Fyodor Volkov to transform it into her summer townhouse
Townhouse
A townhouse is the term historically used in the United Kingdom, Ireland and in many other countries to describe a residence of a peer or member of the aristocracy in the capital or major city. Most such figures owned one or more country houses in which they lived for much of the year...
. Volkov was responsible for many improvements in the grounds, including the construction of the theatre
Theatre
Theatre is a collaborative form of fine art that uses live performers to present the experience of a real or imagined event before a live audience in a specific place. The performers may communicate this experience to the audience through combinations of gesture, speech, song, music or dance...
in the east wing and the church in the west wing. In the garden, he designed the Admiralty Pavilion, gardener house, orangery
Orangery
An orangery was a building in the grounds of fashionable residences from the 17th to the 19th centuries and given a classicising architectural form. The orangery was similar to a greenhouse or conservatory...
, glass-houses, bridges, and ironwork fences. The sculpture named the Venus Tauride
Venus Tauride
The Venus Tauride or Venus of Tauris is a 1.67 m high sculpture of Aphrodite. It is named after the Tauride Palace in St Petersburg, where it was kept from the end of the eighteenth century until the mid-nineteenth...
(now in the Hermitage Museum
Hermitage Museum
The State Hermitage is a museum of art and culture in Saint Petersburg, Russia. One of the largest and oldest museums of the world, it was founded in 1764 by Catherine the Great and has been opened to the public since 1852. Its collections, of which only a small part is on permanent display,...
) was kept in the palace from the end of the eighteenth century until the mid-nineteenth, and derives its name from it.

The exterior appearance of the palace was rather plain and contrasted sharply with the riotous luxuriance of its interiors. The domed hall, one of the largest in Russia, was connected by a 75-meter-long columned gallery with a winter garden
Winter garden
The origin of the winter garden dates back to the 17th to 19th centuries where European nobility would construct large conservatories that would house tropical and subtropical plants and would act as an extension of their living space. Many of these would be attached to their main palaces...
. The decoration of every major room – including the Chinese Hall and the Tapestry Parlour – was destroyed after 1799, when Emperor Paul, who detested all the things his mother liked, gave over the palace to his favourite cavalry regiment to be used as barracks
Barracks
Barracks are specialised buildings for permanent military accommodation; the word may apply to separate housing blocks or to complete complexes. Their main object is to separate soldiers from the civilian population and reinforce discipline, training and esprit de corps. They were sometimes called...
.

In the 19th century, the palace was refurbished by Carlo Rossi
Carlo Rossi (architect)
Carlo di Giovanni Rossi, was an Italian architect, who worked the major portion of his life in Russia. He was the author of many classical buildings and architectural ensembles in Saint Petersburg and its environments...
and Vasily Stasov
Vasily Stasov
Vasily Petrovich Stasov was a Russian architect.-Biography:Stasov was born in Moscow....
as a residence for minor royalty. It had been used to host ball
Ball
A ball is a round, usually spherical but sometimes ovoid, object with various uses. It is used in ball games, where the play of the game follows the state of the ball as it is hit, kicked or thrown by players. Balls can also be used for simpler activities, such as catch, marbles and juggling...
s and exhibitions until 1906, when it was transformed into the seat of the first Russian parliament
Parliament
A parliament is a legislature, especially in those countries whose system of government is based on the Westminster system modeled after that of the United Kingdom. The name is derived from the French , the action of parler : a parlement is a discussion. The term came to mean a meeting at which...
, the Imperial State Duma
Duma
A Duma is any of various representative assemblies in modern Russia and Russian history. The State Duma in the Russian Empire and Russian Federation corresponds to the lower house of the parliament. Simply it is a form of Russian governmental institution, that was formed during the reign of the...
.

Immediately after the February Revolution
February Revolution
The February Revolution of 1917 was the first of two revolutions in Russia in 1917. Centered around the then capital Petrograd in March . Its immediate result was the abdication of Tsar Nicholas II, the end of the Romanov dynasty, and the end of the Russian Empire...
of 1917, Tauride Palace housed the Provisional Government
Provisional government
A provisional government is an emergency or interim government set up when a political void has been created by the collapse of a very large government. The early provisional governments were created to prepare for the return of royal rule...
and the Petrograd Soviet
Soviet (council)
Soviet was a name used for several Russian political organizations. Examples include the Czar's Council of Ministers, which was called the “Soviet of Ministers”; a workers' local council in late Imperial Russia; and the Supreme Soviet of the Soviet Union....
. The abortive Russian Constituent Assembly
Russian Constituent Assembly
The All Russian Constituent Assembly was a constitutional body convened in Russia after the October Revolution of 1917. It is generally reckoned as the first democratically elected legislative body of any kind in Russian history. It met for 13 hours, from 4 p.m...
held its meetings there in 1918. In May 1918 Bolsheviks held here their 7th Congress, where they first named themselves the Russian Communist Party (Bolsheviks).