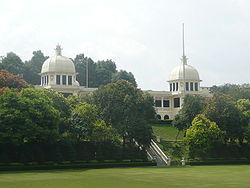 Another royal residence of the Yang di-Pertuan Agong is Istana Melawati in Putrajaya
Putrajaya
Putrajaya is a planned city, located 25km south of Kuala Lumpur, that serves as the federal administrative centre of Malaysia. The seat of government was shifted in 1999 from Kuala Lumpur to Putrajaya, due to the overcrowding and congestion in the Kuala Lumpur areas...
and a replacement palace
New Istana Negara
New Istana Negara is the new official residence of His Majesty, the Yang di-Pertuan Agong of Malaysia. It stands on a -- acre site, located at a commanding position on the slope of a hill of Bukit Damansara overlooking Jalan Duta, along Jalan Duta-Segambut Highway...
is to be built on Jalan Duta
Jalan Duta
Jalan Duta is a major road in Kuala Lumpur, Malaysia which spans from the adjoining roundabout of Jalan Kuching, which the high flyover would take traffic straight into Jalan Ipoh and ends at the Parliament where it adjoins Jalan Mahameru...
in Kuala Lumpur
Kuala Lumpur
Kuala Lumpur is the capital and the second largest city in Malaysia by population. The city proper, making up an area of , has a population of 1.4 million as of 2010. Greater Kuala Lumpur, also known as the Klang Valley, is an urban agglomeration of 7.2 million...
.

The palace was originally a double-storey mansion built in 1928 by a local Chinese
Malaysian Chinese
Malaysian Chinese is a Malaysian of Chinese origin. Most are descendants of Chinese who arrived between the fifteenth and the mid-twentieth centuries. Within Malaysia, they are usually simply referred to as "Chinese" in all languages. The term Chinese Malaysian is also sometimes used to refer to...
millionaire, Chan Wing. During the Japanese occupation
Japanese occupation of Malaya, North Borneo and Sarawak
Throughout much of World War II, British Malaya, North Borneo and Sarawak were under Japanese occupation.The Japanese Empire commenced the Pacific War with the invasion of Kota Bahru in Kelantan on 8 December 1941 at 00:25, about 90 minutes before the Attack on Pearl Harbor in Hawaii at 07:48 on 7...
from 1942–1945, it was used as the residence of the Japanese Governor. After the surrender of the Japanese on 15 August 1945, the British Military Administration (BMA) commandeered it for a senior military officers mess from the rank of brigadier. With the formation of the Federation of Malaya in 1950, the Selangor State Government rented the residence from the owners for Straits Dollars 5,000 a month until Merdeka or Indepencence in 1957. It was renovated to become the palace of His Majesty the Sultan of Selangor. In 1957, the owners sold the property of 13 acres to the Federal Government at an agreed valuation of Straits Dollars 1.4 Million.


Palace areas and use

The building is nestled within a 11.34-hectare compound with a variety of plants and flowers, swimming pool and indoor badminton
Badminton
Badminton is a racquet sport played by either two opposing players or two opposing pairs , who take positions on opposite halves of a rectangular court that is divided by a net. Players score points by striking a shuttlecock with their racquet so that it passes over the net and lands in their...
hall. As the palace grounds are not opened to members of the public or tourists, the Main Palace Entrance is a favourite picture spot for tourists.

The whole area is fenced up and the Royal Insignia of His Majesty is placed on each steel bar between two pillars of the fence. At the front of the Istana Negara, there is the main entrance which resembles an arch. On each side of the arch, are two guard posts to shelter two members of the cavalry in their full dress uniform similar to the ones at Buckingham Palace
Buckingham Palace
Buckingham Palace, in London, is the principal residence and office of the British monarch. Located in the City of Westminster, the palace is a setting for state occasions and royal hospitality...
, London
London
London is the capital city of :England and the :United Kingdom, the largest metropolitan area in the United Kingdom, and the largest urban zone in the European Union by most measures. Located on the River Thames, London has been a major settlement for two millennia, its history going back to its...
.

The driveway, lined with cypresses
Cupressaceae
The Cupressaceae or cypress family is a conifer family with worldwide distribution. The family includes 27 to 30 genera , which include the junipers and redwoods, with about 130-140 species in total. They are monoecious, subdioecious or dioecious trees and shrubs from 1-116 m tall...
and casuarina
Casuarina
Casuarina is a genus of 17 species in the family Casuarinaceae, native to Australasia, southeast Asia, and islands of the western Pacific Ocean. It was once treated as the sole genus in the family, but has been split into three genera .They are evergreen shrubs and trees growing to 35 m tall...
s, leads to two entrances - an entrance to the West Wing and the other to the East Wing.

Balairong Seri is the throne room
Throne room
A throne room is the room, often rather a hall, in the official residence of the crown, either a palace or a fortified castle, where the throne of a senior figure is set up with elaborate pomp— usually raised, often with steps, and under a canopy, both of which are part of the original notion of...
of the Yang di-Pertuan Agong. It is located in the East Wing and only used for official and customary functions. These include ceremonial occasions of taking the royal pledge, installation ceremony of a new elected King and the appointment of a new prime minister
Prime Minister of Malaysia
The Prime Minister of Malaysia is the indirectly elected head of government of Malaysia. He is officially appointed by the Yang di-Pertuan Agong, the head of state, who in HM's judgment is likely to command the confidence of the majority of the members of that House of Representatives , the...
and the federal government which included investiture ceremonies and the taking of oaths by the government ministers
Menteri Besar
The Menteri Besar is the chief executive of the state government for states in Malaysia with hereditary rulers. For states without a monarch, the title Chief Minister is used...
and state governors. This is also where the presentation and acceptance of foreign diplomatic appointments are held. It sometimes serves as a banquet hall.

The second hall on the first floor is the Dewan Mengadap where the King receives honoured guests such as Head of States and foreign dignitaries. This hall doubles as a resting place of Sultans and Governors during the Conference of Rulers. The other rooms are Bilik Duta, Bilik Permaisuri and Bilik Menteri. Bilik Duta is where the King grants audience to the Prime Minister and also where honoured guests are received. The Queen receives her guests at the Bilik Permaisuri while the Bilik Menteri is the rest room for guests.

The construction was commenced on mid-2007, and Works Minister Shaziman Abu Mansor said the palace is expected to be completed on June 30 next year (2011), at a total cost of RM797 million.

The old building is to become a museum, however local peaceful protests against the idea have a chance of disrupting this plan.