Encyclopedia
The Israel Museum, Jerusalem was founded in 1965 as Israel
Israel
The State of Israel is a parliamentary republic located in the Middle East, along the eastern shore of the Mediterranean Sea...
's national museum
National museum
A national museum is a museum maintained by a nation.The following is a list of national museums:-Australia:*Australian National Aviation Museum*Australian National Maritime Museum*, Sydney*Australian War Memorial*Museum Victoria...
. It is situated on a hill in the Givat Ram
Givat Ram
Givat Ram is a neighborhood in central Jerusalem, Israel. Many of Israel's most important national institutions are located in Givat Ram, among them the Knesset, the Israel Museum, the National Library of Israel and the Israeli Supreme Court.-Etymology:...
neighborhood of Jerusalem, near the Bible Lands Museum
Bible Lands Museum
The Bible Lands Museum is a museum in Jerusalem, Israel, that explores the culture of the peoples mentioned in the Bible, among them the ancient Egyptians, Canaanites, Philistines, Arameans, Hittites, Elamites, Phoenicians and Persians...
, the Knesset
Knesset
The Knesset is the unicameral legislature of Israel, located in Givat Ram, Jerusalem.-Role in Israeli Government :The legislative branch of the Israeli government, the Knesset passes all laws, elects the President and Prime Minister , approves the cabinet, and supervises the work of the government...
, the Israeli Supreme Court, and the Hebrew University of Jerusalem
Hebrew University of Jerusalem
The Hebrew University of Jerusalem ; ; abbreviated HUJI) is Israel's second-oldest university, after the Technion – Israel Institute of Technology. The Hebrew University has three campuses in Jerusalem and one in Rehovot. The world's largest Jewish studies library is located on its Edmond J...
.

Jerusalem mayor Teddy Kollek
Teddy Kollek
Theodor "Teddy" Kollek was mayor of Jerusalem from 1965 to 1993, and founder of the Jerusalem Foundation. Kollek was re-elected five times, in 1969, 1973, 1978, 1983 and 1989...
was the driving spirit behind the establishment of the museum, one of the leading art and archaeology museums in the world. The Museum has extensive collections of biblical archaeology, Judaica, ethnography
Ethnography
Ethnography is a qualitative method aimed to learn and understand cultural phenomena which reflect the knowledge and system of meanings guiding the life of a cultural group...
, fine art
Fine art
Fine art or the fine arts encompass art forms developed primarily for aesthetics and/or concept rather than practical application. Art is often a synonym for fine art, as employed in the term "art gallery"....
, artifacts from Africa, North and South America, Oceania and the Far East, rare manuscripts, ancient glass and sculpture. A uniquely designed building on the grounds of the museum, the Shrine of the Book
Shrine of the Book
The Shrine of the Book , a wing of the Israel Museum near Givat Ram in Jerusalem, houses the Dead Sea Scrolls—discovered 1947–56 in 11 caves in and around the Wadi Qumran...
, houses the Dead Sea Scrolls
Dead Sea scrolls
The Dead Sea Scrolls are a collection of 972 texts from the Hebrew Bible and extra-biblical documents found between 1947 and 1956 on the northwest shore of the Dead Sea, from which they derive their name...
and artifacts discovered at Masada
Masada
Masada is the name for a site of ancient palaces and fortifications in the South District of Israel, on top of an isolated rock plateau, or horst, on the eastern edge of the Judean Desert, overlooking the Dead Sea. Masada is best known for the violence that occurred there in the first century CE...
. The museum's holding include 500,000 objects with some 7,000 objects and works currently online.

The museum covers nearly 50,000 sq. meters. It attracts 800,000 visitors a year including 100,000 children to its Youth Wing. The Samuel Bronfman Biblical and Archaeological Museum, which is a part of the museum complex, contains various archaeological finds. It has the largest collection of artifacts from Israel in the world.


Shrine of the Book

The Shrine of the Book houses the Dead Sea Scrolls, discovered 1947–56 in 11 caves in and around the Wadi Qumran
Qumran
Qumran is an archaeological site in the West Bank. It is located on a dry plateau about a mile inland from the northwestern shore of the Dead Sea, near the Israeli settlement and kibbutz of Kalia...
. An elaborate planning process of seven years led to the building's eventual construction in 1965 which was funded by the family of David Samuel Gottesman, the Hungarian émigré, the philanthropist who had purchased the scrolls as a gift to the State of Israel.

As the fragility of the scrolls makes it impossible to display all on a continuous basis, a system of rotation is used. After a scroll has been exhibited for 3–6 months, it is removed from its showcase and placed temporarily in a special storeroom, where it "rests" from exposure. The museum also holds other rare ancient manuscripts and displays The Aleppo Codex
Aleppo Codex
The Aleppo Codex is a medieval bound manuscript of the Hebrew Bible. The codex was written in the 10th century A.D.The codex has long been considered to be the most authoritative document in the masorah , the tradition by which the Hebrew Scriptures have been preserved from generation to generation...
, which is from the 10th-century and is believed to be the oldest complete Bible in Hebrew. 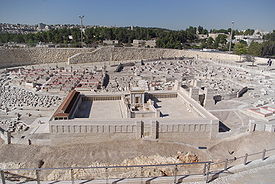 One of the recent additions to the Museum is the Second Temple Era model of Jerusalem. The model reconstructs the topography and architectural character of the city as it was prior to 66 CE, the year in which the Great Revolt against the Romans erupted, leading to the eventual destruction of the city and the Temple. Originally constructed on the grounds of Jerusalem’s Holyland Hotel, the model, which includes a replica of the Herod's Temple
Replicas of the Jewish Temple
Replicas of the Jewish Temple are scale models or authentic buildings that attempt to replicate the Temple of Solomon, Second Temple and Herod's Temple in Jerusalem.-Scale models:...
, is now a permanent feature of the Museum’s 20 acres (80,937.2 m²) campus, adjacent to the Shrine of the Book.

The Israel Museum holds a large collection of paintings representing a wide range of periods, styles, subjects and regions of origin. Painters in the collection include such international figures as Rembrandt, Marc Chagall
Marc Chagall
Marc Chagall Art critic Robert Hughes referred to Chagall as "the quintessential Jewish artist of the twentieth century."According to art historian Michael J...
and Camille Pissarro
Camille Pissarro
Camille Pissarro was a French Impressionist and Neo-Impressionist painter born on the island of St Thomas . His importance resides in his contributions to both Impressionism and Post-Impressionism, as he was the only artist to exhibit in both forms...
as well as such Israeli and Jewish artists as Abel Pann
Abel Pann
]Abel Pann,, born Abba Pfeffermann in Latvia or in Kreslawka, Vitebsk, Belarus,, sources vary, was a European Jewish artist who spent most of his adult life in Jerusalem.-Early career and war paintings:...
.

The Youth Wing of the museum was opened in 1966. The wing combines annual original artworks of Israeli and international artists, with educational activities. There are also a variety of workshops for children and adults.