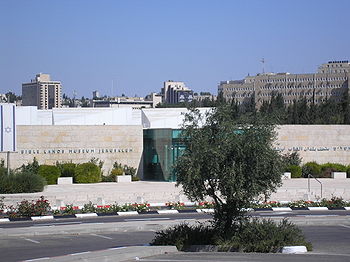 The Bible Lands Museum is a museum in Jerusalem, Israel
Israel
The State of Israel is a parliamentary republic located in the Middle East, along the eastern shore of the Mediterranean Sea...
, that explores the culture of the peoples mentioned in the Bible
Bible
The Bible refers to any one of the collections of the primary religious texts of Judaism and Christianity. There is no common version of the Bible, as the individual books , their contents and their order vary among denominations...
, among them the ancient Egyptians, Canaanites, Philistines
Philistines
Philistines , Pleshet or Peleset, were a people who occupied the southern coast of Canaan at the beginning of the Iron Age . According to the Bible, they ruled the five city-states of Gaza, Askelon, Ashdod, Ekron and Gath, from the Wadi Gaza in the south to the Yarqon River in the north, but with...
, Arameans, Hittites
Hittites
The Hittites were a Bronze Age people of Anatolia.They established a kingdom centered at Hattusa in north-central Anatolia c. the 18th century BC. The Hittite empire reached its height c...
, Elamites, Phoenicians and Persians. The aim of the museum is to put these peoples into historical context.The museum is located on Museum Row in Givat Ram
Givat Ram
Givat Ram is a neighborhood in central Jerusalem, Israel. Many of Israel's most important national institutions are located in Givat Ram, among them the Knesset, the Israel Museum, the National Library of Israel and the Israeli Supreme Court.-Etymology:...
, between the Israel Museum
Israel Museum
The Israel Museum, Jerusalem was founded in 1965 as Israel's national museum. It is situated on a hill in the Givat Ram neighborhood of Jerusalem, near the Bible Lands Museum, the Knesset, the Israeli Supreme Court, and the Hebrew University of Jerusalem....
, The National Campus for the Archaeology of Israel, and the Bloomfield Museum of Science.

The museum was founded by Elie Borowski in 1992 to house his personal collection. On a visit to Jerusalem in 1981, a woman he met at a hotel, Batya Weiss, encouraged him to bring his collection to Israel rather than establish a museum for it in Toronto, Canada, as he had intended. She put him in contact with Jerusalem mayor Teddy Kollek
Teddy Kollek
Theodor "Teddy" Kollek was mayor of Jerusalem from 1965 to 1993, and founder of the Jerusalem Foundation. Kollek was re-elected five times, in 1969, 1973, 1978, 1983 and 1989...
. Borowski heeded her advice, and built the Bible Lands Museum. The two eventually married.

The main gallery displays hundreds of artifacts: ancient documents, idols, coins, statues, weapons, pottery, and seals from across the ancient Near East. Many topics are elaborated upon in brief articles on the walls (e.g. the origins of the alphabet, embalming, and Abraham's journey). The museum also exhibits scale models of ancient sites in Jerusalem, a Ziggurat
Ziggurat
Ziggurats were massive structures built in the ancient Mesopotamian valley and western Iranian plateau, having the form of a terraced step pyramid of successively receding stories or levels.Notable ziggurats include the Great Ziggurat of Ur near Nasiriyah, Iraq; the Ziggurat of Aqar Quf near...
at Ur
Ur
Ur was an important city-state in ancient Sumer located at the site of modern Tell el-Muqayyar in Iraq's Dhi Qar Governorate...
and the pyramids at Giza. While the museum's emphasis is the history of ancient Near East
Near East
The Near East is a geographical term that covers different countries for geographers, archeologists, and historians, on the one hand, and for political scientists, economists, and journalists, on the other...
ern civilizations, the curators draw attention to relevant biblical verses. For example, above a gallery of ancient Anatolia
Anatolia
Anatolia is a geographic and historical term denoting the westernmost protrusion of Asia, comprising the majority of the Republic of Turkey...
n jugs is the verse "Behold, Rebecca came forth with her pitcher on her shoulder; and she went down unto the fountain and drew water" (Genesis 24:45).

The main gallery consists of 21 numbered sections in chronological order: