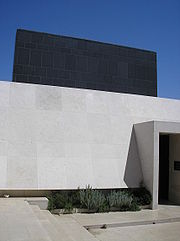 The Shrine of the Book ( Heikhal HaSefer), a wing of the Israel Museum
Israel Museum
The Israel Museum, Jerusalem was founded in 1965 as Israel's national museum. It is situated on a hill in the Givat Ram neighborhood of Jerusalem, near the Bible Lands Museum, the Knesset, the Israeli Supreme Court, and the Hebrew University of Jerusalem....
near Givat Ram
Givat Ram
Givat Ram is a neighborhood in central Jerusalem, Israel. Many of Israel's most important national institutions are located in Givat Ram, among them the Knesset, the Israel Museum, the National Library of Israel and the Israeli Supreme Court.-Etymology:...
in Jerusalem, houses the Dead Sea Scrolls
Dead Sea scrolls
The Dead Sea Scrolls are a collection of 972 texts from the Hebrew Bible and extra-biblical documents found between 1947 and 1956 on the northwest shore of the Dead Sea, from which they derive their name...
—discovered 1947–56 in 11 caves in and around the Wadi Qumran
Qumran
Qumran is an archaeological site in the West Bank. It is located on a dry plateau about a mile inland from the northwestern shore of the Dead Sea, near the Israeli settlement and kibbutz of Kalia...
. Initially, it was intended to build the shrine on the Givat Ram campus of the Hebrew University, adjoining the National Library.

An elaborate planning process of seven years led to the building's eventual construction in 1965, funded by the family of David Samuel Gottesman, the Hungarian émigré and philanthropist who had purchased the scrolls as a gift to the State of Israel
Israel
The State of Israel is a parliamentary republic located in the Middle East, along the eastern shore of the Mediterranean Sea...
. One of the architects—the pragmatic Armand Phillip Bartos
Armand Phillip Bartos
Armand Phillip Bartos was an American architect and philanthropist.Though highly active as a philanthropist, Bartos became primarily known as the co-designer of Shrine of the Book that houses the Dead Sea Scrolls in western Jerusalem.Bartos's various and diverse activities, primarily not...
(1910–2005)— was evidently chosen based on his being married to Gottesman's daughter Celeste Ruth Gottesman (who formerly had married Jerome John Altman in 1935 and divorced). For the other appointed architect—the eccentric visionary Frederick John Kiesler
Frederick John Kiesler
Frederick John Kiesler...
(1890–1965)—Gottesman had earlier funded a fact-finding project to discover if Kiesler's "Endless House" could be installed at The Museum of Modern Art in New York City. The architectural team also included Gezer Heller, who went on to build many important structures in the new State of Israel. He married Alice Hammer, sister of Ibbi Hammer, the woman who became the chief banker of the State of Israel. She was the daughter of the Chief Rabbi of Budapest
Budapest
Budapest is the capital of Hungary. As the largest city of Hungary, it is the country's principal political, cultural, commercial, industrial, and transportation centre. In 2011, Budapest had 1,733,685 inhabitants, down from its 1989 peak of 2,113,645 due to suburbanization. The Budapest Commuter...
.

Initially, Israeli architects strongly objected to non-Israeli architects' having been chosen through nepotism and to Kiesler's having never completed his architectural studies in Vienna
Vienna
Vienna is the capital and largest city of the Republic of Austria and one of the nine states of Austria. Vienna is Austria's primary city, with a population of about 1.723 million , and is by far the largest city in Austria, as well as its cultural, economic, and political centre...
and Berlin
Berlin
Berlin is the capital city of Germany and is one of the 16 states of Germany. With a population of 3.45 million people, Berlin is Germany's largest city. It is the second most populous city proper and the seventh most populous urban area in the European Union...
(though licensed as an architect in New York) and having never built anything. He was primarily an avant-garde stage designer who taught occasionally. Nevertheless, the American-Jewish architects had been chosen by Gottesman as early as 1955.

The shrine
Shrine
A shrine is a holy or sacred place, which is dedicated to a specific deity, ancestor, hero, martyr, saint, daemon or similar figure of awe and respect, at which they are venerated or worshipped. Shrines often contain idols, relics, or other such objects associated with the figure being venerated....
is built as a white dome
Dome
A dome is a structural element of architecture that resembles the hollow upper half of a sphere. Dome structures made of various materials have a long architectural lineage extending into prehistory....
, covering a structure placed two-thirds below the ground, that is reflected in a pool of water that surrounds it. Across from the white dome is a black basalt
Basalt
Basalt is a common extrusive volcanic rock. It is usually grey to black and fine-grained due to rapid cooling of lava at the surface of a planet. It may be porphyritic containing larger crystals in a fine matrix, or vesicular, or frothy scoria. Unweathered basalt is black or grey...
wall. The colors and shapes of the building are based on the imagery of the Scroll of the War of the Sons of Light Against the Sons of Darkness
War of the Sons of Light Against the Sons of Darkness
The War of the Sons of Light Against the Sons of Darkness is a manual for military organization and strategy that was discovered among the Dead Sea Scrolls. It is also known by the names "War Rule", "Rule of War", and "War Scroll". The manuscript was among the scrolls from Qumran Cave 1 acquired by...
; the white dome symbolizes the Sons of Light and the black wall symbolizes the Sons of Darkness.

As the fragility of the scrolls makes it impossible to display all on a continuous basis, a system of rotation is used. After a scroll has been exhibited for 3–6 months, it is removed from its showcase and placed temporarily in a special storeroom, where it "rests" from exposure.

The museum
Museum
A museum is an institution that cares for a collection of artifacts and other objects of scientific, artistic, cultural, or historical importance and makes them available for public viewing through exhibits that may be permanent or temporary. Most large museums are located in major cities...
also holds other rare ancient manuscript
Manuscript
A manuscript or handwrite is written information that has been manually created by someone or some people, such as a hand-written letter, as opposed to being printed or reproduced some other way...
s and displays The Aleppo Codex
Aleppo Codex
The Aleppo Codex is a medieval bound manuscript of the Hebrew Bible. The codex was written in the 10th century A.D.The codex has long been considered to be the most authoritative document in the masorah , the tradition by which the Hebrew Scriptures have been preserved from generation to generation...
. Its dome, due to the quirky architecture, has been used as scenery for several science fiction movies.