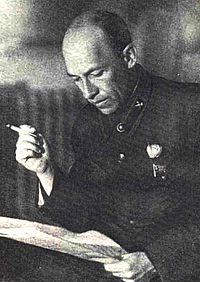 Dunayevsky was born to a Jewish family in Lokhvitsa, Poltava Governorate
Poltava Governorate
The Poltava Governorate or Government of Poltava was a guberniya in the historical Left-bank Ukraine region of the Russian Empire, which was officially created in 1802 from the disbanded Malorossiya Governorate which was split between the Chernigov Governorate and Poltava Governorate with an...
, Russian Empire
Russian Empire
The Russian Empire was a state that existed from 1721 until the Russian Revolution of 1917. It was the successor to the Tsardom of Russia and the predecessor of the Soviet Union...
in 1900. He studied at the Kharkiv
Kharkiv
Kharkiv or Kharkov is the second-largest city in Ukraine.The city was founded in 1654 and was a major centre of Ukrainian culture in the Russian Empire. Kharkiv became the first city in Ukraine where the Ukrainian Soviet Socialist Republic was proclaimed in December 1917 and Soviet government was...
Musical School in 1910 where he studied violin
Violin
The violin is a string instrument, usually with four strings tuned in perfect fifths. It is the smallest, highest-pitched member of the violin family of string instruments, which includes the viola and cello....
under Joseph Achron
Joseph Achron
Joseph Yulyevich Achron, also seen as Akhron was a Russian composer and violinist of Jewish origin, settled in USA. His preoccupation with Jewish elements and his desire to develop a 'Jewish' harmonic and contrapuntal idiom, underscored and informed much of his work...
. During this period he started to study the theory of music under Semyon Bogatyrev (1890–1960). He graduated in 1919 from the Kharkiv Conservatory. At first he was a violinist, the leader of the orchestra in Kharkiv. Then he started a conducting career. In 1924 he went to Moscow
Moscow
Moscow is the capital, the most populous city, and the most populous federal subject of Russia. The city is a major political, economic, cultural, scientific, religious, financial, educational, and transportation centre of Russia and the continent...
to run the Theatre Hermitage. After that he worked in Leningrad
Saint Petersburg
Saint Petersburg is a city and a federal subject of Russia located on the Neva River at the head of the Gulf of Finland on the Baltic Sea...
(1929–1941) as a director and conductor of the "Music-Hall" (1929–34) and then moved to Moscow to work on his operettas and film music.

He was one of the first composers in the Soviet Union
Soviet Union
The Soviet Union , officially the Union of Soviet Socialist Republics , was a constitutionally socialist state that existed in Eurasia between 1922 and 1991....
to start using jazz
Jazz
Jazz is a musical style that originated at the beginning of the 20th century in African American communities in the Southern United States. It was born out of a mix of African and European music traditions. From its early development until the present, jazz has incorporated music from 19th and 20th...
. His music was accessible to the masses, with melodious and memorable tunes that secured his success. He wrote the music for three of the most important films of the pre-war Stalinist era, Jolly Fellows, Circus
Circus (1936 film)
Circus is a 1936 Soviet melodramatic comedy musical film. It was directed by Grigori Aleksandrov at the Mosfilm studios. In his own words, it was conceived as "an eccentric comedy...a real side splitter."...
and the film said to be Stalin's favourite film Volga-Volga
Volga-Volga
Volga-Volga is a Soviet comedy directed by Grigori Aleksandrov, released on April 24, 1938. It centres around a group of amateur performers on their way to Moscow to perform in a talent contest called the Moscow Musical Olympiad. Most of the action takes place on a steamboat travelling on the...
, all directed by Grigori Aleksandrov
Grigori Aleksandrov
Grigori Vasilyevich Aleksandrov or Alexandrov was a prominent Soviet film director who was named a People's Artist of the USSR in 1947 and a Hero of Socialist Labor in 1973...
.

He died of a heart attack in Moscow in 1955. His last piece, the operetta White Acacia (1955), was left unfinished at his death. It was completed by Kirill Molchanov and staged on 15 November 1955, in Moscow.

A book of his essays and memoirs was published in 1961.

Dunayevsky was married twice. He had a son Yevgeny (b. 1932) by his wife Zinaida Sudeikina, and another son Maksim
Maksim Dunayevsky
Maksim Isaakovich Dunayevsky is a popular Soviet/Russian film composer. Son of Isaak Dunayevsky.-Soundtracks:*D'Artagnan and Three Musketeers *The Trust That Has Burst *Mary Poppins, Goodbye *The Witches Cave...
(b. 1945) by his lover, the ballerina Zoya Pashkova. Maksim was also a well-known composer, and continues the traditions of his father in musicals and operettas.