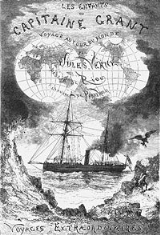 In Search of the Castaways
Topic Home
Discussion
0

Encyclopedia
In Search of the Castaways is a novel by the French
France
The French Republic , The French Republic , The French Republic , (commonly known as France , is a unitary semi-presidential republic in Western Europe with several overseas territories and islands located on other continents and in the Indian, Pacific, and Atlantic oceans. Metropolitan France...
writer Jules Verne
Jules Verne
Jules Gabriel Verne was a French author who pioneered the science fiction genre. He is best known for his novels Twenty Thousand Leagues Under the Sea , A Journey to the Center of the Earth , and Around the World in Eighty Days...
, published in 1867–1868. The original edition, published by Hetzel
Pierre-Jules Hetzel
Pierre-Jules Hetzel was a French editor and publisher. He is best known for his extraordinarily lavishly illustrated editions of Jules Verne's novels highly prized by collectors today...
, contains a number of illustrations by Édouard Riou
Édouard Riou
Édouard Riou was a French painter and illustrator of books by Jules Verne.Riou was a pupil of Charles-François Daubigny and Gustave Doré, graduated in 1859...
. In 1876 it was republished by George Routledge & Sons as a three volume set titled "A Voyage Round The World". The three volumes were subtitled "South America", "Australia", and "New Zealand".

The book tells the story of the quest for Captain Grant of the Britannia. After finding a bottle cast into the ocean by the captain himself after the Britannia is shipwrecked, Lord and Lady Glenarvan of Scotland
Scotland
Scotland is a country that is part of the United Kingdom. Occupying the northern third of the island of Great Britain, it shares a border with England to the south and is bounded by the North Sea to the east, the Atlantic Ocean to the north and west, and the North Channel and Irish Sea to the...
contact Mary and Robert, the young daughter and son of Captain Grant, through an announcement in a newspaper. Moved by the children's condition, Lord and Lady Glenarvan decide to launch a rescue expedition. The main difficulty is that the coordinates of the wreckage are mostly erased, and only the latitude
Latitude
In geography, the latitude of a location on the Earth is the angular distance of that location south or north of the Equator. The latitude is an angle, and is usually measured in degrees . The equator has a latitude of 0°, the North pole has a latitude of 90° north , and the South pole has a...
(37 degrees) is known; thus, the expedition would have to circumnavigate the 37th parallel south
37th parallel south
The 37th parallel south is a circle of latitude that is 37 degrees south of the Earth's equatorial plane. It crosses the Atlantic Ocean, the Indian Ocean, Australasia, the Pacific Ocean and South America....
. Remaining clues consist of a few words in three languages. They are re-interpreted several times throughout the novel to make various destinations seem likely.

Lord Glenarvan makes it his quest to find Grant; together with his wife, Grant's children and the crew of his yacht
Yacht
A yacht is a recreational boat or ship. The term originated from the Dutch Jacht meaning "hunt". It was originally defined as a light fast sailing vessel used by the Dutch navy to pursue pirates and other transgressors around and into the shallow waters of the Low Countries...
, the Duncan, they set off for South America
South America
South America is a continent situated in the Western Hemisphere, mostly in the Southern Hemisphere, with a relatively small portion in the Northern Hemisphere. The continent is also considered a subcontinent of the Americas. It is bordered on the west by the Pacific Ocean and on the north and east...
. An unexpected passenger in the form of French geographer Jacques Paganel
Jacques Paganel
Jacques Eliacin François Marie Paganel is one of the main characters in Jules Verne's novel In Search of the Castaways...
(he missed his steamer to India
India
India , officially the Republic of India , is a country in South Asia. It is the seventh-largest country by geographical area, the second-most populous country with over 1.2 billion people, and the most populous democracy in the world...
by accidentally boarding on the Duncan) joins the search. They explore Patagonia
Patagonia
Patagonia is a region located in Argentina and Chile, integrating the southernmost section of the Andes mountains to the southwest towards the Pacific ocean and from the east of the cordillera to the valleys it follows south through Colorado River towards Carmen de Patagones in the Atlantic Ocean...
, Tristan da Cunha Island
Tristan da Cunha
Tristan da Cunha is a remote volcanic group of islands in the south Atlantic Ocean and the main island of that group. It is the most remote inhabited archipelago in the world, lying from the nearest land, South Africa, and from South America...
, Amsterdam Island, and Australia
Australia
Australia , officially the Commonwealth of Australia, is a country in the Southern Hemisphere comprising the mainland of the Australian continent, the island of Tasmania, and numerous smaller islands in the Indian and Pacific Oceans. It is the world's sixth-largest country by total area...
(a pretext to describe the flora, fauna, and geography of numerous places to the targeted audience).

There, they find a former quarter-master of the Britannia, Ayrton
Tom Ayrton
Tom Ayrton is a fictional character who appears in two novels by French author Jules Verne. He is first introduced as a major character in the novel In Search of the Castaways...
, who proposes to lead them to the site of the wreckage. However, Ayrton is a traitor, who was not present during the loss of the Britannia, but was abandoned in Australia after a failed attempt to seize control of the ship to practice piracy
Piracy
Piracy is an act of robbery or criminal violence at sea. The term can include acts committed on land, in the air, or in other major bodies of water or on a shore. It does not normally include crimes committed against persons traveling on the same vessel as the perpetrator...
. He tries to take control of the Duncan, but out of sheer luck, this attempt also fails. However the Glenarvans, the Grant children, Paganel and some sailors are left in Australia, and mistakenly believing that the Duncan is lost, they sail to Auckland
Auckland
The Auckland metropolitan area , in the North Island of New Zealand, is the largest and most populous urban area in the country with residents, percent of the country's population. Auckland also has the largest Polynesian population of any city in the world...
, New Zealand
New Zealand
New Zealand is an island country in the south-western Pacific Ocean comprising two main landmasses and numerous smaller islands. The country is situated some east of Australia across the Tasman Sea, and roughly south of the Pacific island nations of New Caledonia, Fiji, and Tonga...
, from where they want to come back to Europe. When their ship is wrecked south of Auckland on the New Zealand coast, they are captured by a Māori tribe, but luckily manage to escape and board a ship that they discover, with their greatest surprise, to be the Duncan.

Ayrton, made a prisoner, offers to trade his knowledge of Captain Grant in exchange for being abandoned on a desert island instead of being surrendered to the British authorities. The Duncan sets sail for the Tabor Island, which, out of sheer luck, turns out to be Captain Grant's shelter. They leave Ayrton in his place to live among the beasts and regain his humanity.