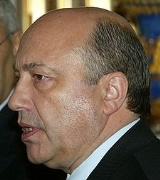 Encyclopedia
Igor Sergeyevich Ivanov (b. September 23, 1945 in Moscow) is a Russian politician and was Russian Foreign Minister from 1998 to 2004.

He is the son of a Russian father and a Georgian
Georgia (country)
Georgia is a sovereign state in the Caucasus region of Eurasia. Located at the crossroads of Western Asia and Eastern Europe, it is bounded to the west by the Black Sea, to the north by Russia, to the southwest by Turkey, to the south by Armenia, and to the southeast by Azerbaijan. The capital of...
mother. In 1969 he graduated at the Maurice Thorez Moscow Institute of Foreign Languages (Moscow State Linguistic University
Moscow State Linguistic University
Moscow State Linguistic University , previously known as Maurice Thorez Moscow State Pedagogical Institute of Foreign Languages is a university in Moscow, Russia. It is the largest and the oldest university in Russia that specializes in linguistics and foreign languages. There are about 10...
). He joined the Soviet Foreign Ministry in 1973 and spent a decade in Spain. He returned to the Soviet Union
Soviet Union
The Soviet Union , officially the Union of Soviet Socialist Republics , was a constitutionally socialist state that existed in Eurasia between 1922 and 1991....
in 1983. In 1991 he became the ambassador in Madrid.

He was appointed Minister of Foreign Affairs on September 11, 1998. As Russian foreign minister, Ivanov was an opponent of NATO's action in Yugoslavia. He was also an opponent of the U.S. invasion of Iraq
2003 invasion of Iraq
The 2003 invasion of Iraq , was the start of the conflict known as the Iraq War, or Operation Iraqi Freedom, in which a combined force of troops from the United States, the United Kingdom, Australia and Poland invaded Iraq and toppled the regime of Saddam Hussein in 21 days of major combat operations...
. Ivanov played a key role in mediating a deal between Georgian President Eduard Shevardnadze
Eduard Shevardnadze
Eduard Shevardnadze is a former Soviet, and later, Georgian statesman from the height to the end of the Cold War. He served as President of Georgia from 1995 to 2003, and as First Secretary of the Georgian Communist Party , from 1972 to 1985. Shevardnadze was responsible for many top decisions on...
and opposition parties during Georgia
Georgia (country)
Georgia is a sovereign state in the Caucasus region of Eurasia. Located at the crossroads of Western Asia and Eastern Europe, it is bounded to the west by the Black Sea, to the north by Russia, to the southwest by Turkey, to the south by Armenia, and to the southeast by Azerbaijan. The capital of...
's "Rose Revolution
Rose Revolution
The "Revolution of Roses" was a change of power in Georgia in November 2003, which took place after having widespread protests over the disputed parliamentary elections...
" in 2003.

Ivanov was succeeded to the post of foreign minister by Sergey Lavrov
Sergey Lavrov
Sergey Viktorovich Lavrov is the Foreign Minister of Russia. Prior to that, Lavrov was a Soviet diplomat and Russia's ambassador to the United Nations from 1994 to 2004. Lavrov speaks Russian, English, French and Sinhala....
in 2004, and appointed by President Vladimir Putin
Vladimir Putin
Vladimir Vladimirovich Putin served as the second President of the Russian Federation and is the current Prime Minister of Russia, as well as chairman of United Russia and Chairman of the Council of Ministers of the Union of Russia and Belarus. He became acting President on 31 December 1999, when...
to the post of Secretary of the Security Council (national security advisor).

On July 9, 2007 he submitted his resignation. On July 18, President Putin accepted Ivanov's resignation and appointed KGB
KGB
The KGB was the commonly used acronym for the . It was the national security agency of the Soviet Union from 1954 until 1991, and was the premier internal security, intelligence, and secret police organization during that time.The State Security Agency of the Republic of Belarus currently uses the...
veteran Valentin Sobolev as acting secretary.

In 2011 Ivanov took seat in the advisory council of The Hague Institute for Global Justice
The Hague Institute for Global Justice
is founded in 2011 in The Hague, The Netherlands . Former US Secretary of State Madeleine Albright is chair of the advisory council of the institute. THIGJ was founded as an independent centre of expertise, dedicated to the promotion of knowledge of law and justice as the basis of and in relation...
.