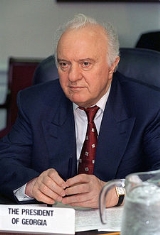 Overview
Eduard Shevardnadze is a former Soviet
Soviet people
Soviet people or Soviet nation was an umbrella demonym for the population of the Soviet Union. Initially used as a nonspecific reference to the Soviet population, it was eventually declared to be a "new historical, social and international unity of people".-Nationality politics in early Soviet...
, and later, Georgian
Georgians
The Georgians are an ethnic group that have originated in Georgia, where they constitute a majority of the population. Large Georgian communities are also present throughout Russia, European Union, United States, and South America....
statesman from the height to the end of the Cold War
Cold War
The Cold War was the continuing state from roughly 1946 to 1991 of political conflict, military tension, proxy wars, and economic competition between the Communist World—primarily the Soviet Union and its satellite states and allies—and the powers of the Western world, primarily the United States...
. He served as President of Georgia
President of Georgia
The President of Georgia is the head of state, supreme commander-in-chief and holder of the highest office within the Government of Georgia. Executive power is split between the President and the Prime Minister, who is the head of government...
from 1995 to 2003, and as First Secretary of the Georgian Communist Party
Georgian Communist party
Georgia was incorporated into the Soviet Union as the Georgian Soviet Socialist Republic after 25 February 1921 when the Red Army entered its capital Tbilisi and installed a communist government led by Georgian Bolshevik Filipp Makharadze. After the 1924 August Uprising in Georgia the country was...
(GPC, the de facto leader of Soviet Georgia), from 1972 to 1985. Shevardnadze was responsible for many top decisions on Soviet foreign policy in the Gorbachev Era. He was forced to retire in 2003 as a consequence of the bloodless Rose Revolution
Rose Revolution
The "Revolution of Roses" was a change of power in Georgia in November 2003, which took place after having widespread protests over the disputed parliamentary elections...
.

Shevardnadze's political career started in the late 1940s as a leading member of his local Komsomol
Komsomol
The Communist Union of Youth , usually known as Komsomol , was the youth division of the Communist Party of the Soviet Union. The Komsomol in its earliest form was established in urban centers in 1918. During the early years, it was a Russian organization, known as the Russian Communist Union of...
organisation.

"In times of crisis, I always believe one should be where the people are."

While standing on a tank outisde the Parliament building in Moscow during the August 1991 coup.

"Corruption has its own motivations, and one has to thoroughly study that phenomenon and eliminate the foundations that allow corruption to exist."

"You know, to address crowds and make promises does not require very much brains."

"It is time to realize that neither socialism, nor friendship, nor good-neighborliness, nor respect can be produced by bayonets, tanks or blood." Category:Politicians|Shevardnadze, Eduard