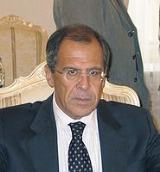 Encyclopedia
Sergey Viktorovich Lavrov (real last name - Kalantaryan) is the Foreign Minister of Russia
Foreign Minister of Russia
This is a list of foreign ministers of Tsardom of Russia, Russian Empire, Soviet Union, and Russian Federation.-Heads of Posolsky Prikaz, 1549-1699:*Ivan Viskovatyi 1549-62*Andrey Vasilyev 1562-1570*Brothers Vasily and Andrey Shchelkalov 1570-1601...
. Prior to that, Lavrov was a Soviet diplomat and Russia's ambassador to the United Nations
United Nations
The United Nations is an international organization whose stated aims are facilitating cooperation in international law, international security, economic development, social progress, human rights, and achievement of world peace...
from 1994 to 2004. Lavrov speaks Russian
Russian language
Russian is a Slavic language used primarily in Russia, Belarus, Uzbekistan, Kazakhstan, Tajikistan and Kyrgyzstan. It is an unofficial but widely spoken language in Ukraine, Moldova, Latvia, Turkmenistan and Estonia and, to a lesser extent, the other countries that were once constituent republics...
, English
English language
English is a West Germanic language that arose in the Anglo-Saxon kingdoms of England and spread into what was to become south-east Scotland under the influence of the Anglian medieval kingdom of Northumbria...
, French
French language
French is a Romance language spoken as a first language in France, the Romandy region in Switzerland, Wallonia and Brussels in Belgium, Monaco, the regions of Quebec and Acadia in Canada, and by various communities elsewhere. Second-language speakers of French are distributed throughout many parts...
and Sinhala.


Lavrov was born in Moscow to an Armenian
Armenians
Armenian people or Armenians are a nation and ethnic group native to the Armenian Highland.The largest concentration is in Armenia having a nearly-homogeneous population with 97.9% or 3,145,354 being ethnic Armenian....
father and Russian
Russians
The Russian people are an East Slavic ethnic group native to Russia, speaking the Russian language and primarily living in Russia and neighboring countries....
mother from Georgia
Georgia (country)
Georgia is a sovereign state in the Caucasus region of Eurasia. Located at the crossroads of Western Asia and Eastern Europe, it is bounded to the west by the Black Sea, to the north by Russia, to the southwest by Turkey, to the south by Armenia, and to the southeast by Azerbaijan. The capital of...
. He graduated from the Moscow State Institute of International Relations (MGIMO) in 1972. He was sent as a Soviet
Soviet Union
The Soviet Union , officially the Union of Soviet Socialist Republics , was a constitutionally socialist state that existed in Eurasia between 1922 and 1991....
diplomat to Sri Lanka
Sri Lanka
Sri Lanka, officially the Democratic Socialist Republic of Sri Lanka is a country off the southern coast of the Indian subcontinent. Known until 1972 as Ceylon , Sri Lanka is an island surrounded by the Indian Ocean, the Gulf of Mannar and the Palk Strait, and lies in the vicinity of India and the...
, where he worked until 1976. He then returned to Moscow and worked in the Department of International Organizations of the Ministry of Foreign Affairs.


Ambassador to the United Nations

On 9 March 2004, President Vladimir Putin
Vladimir Putin
Vladimir Vladimirovich Putin served as the second President of the Russian Federation and is the current Prime Minister of Russia, as well as chairman of United Russia and Chairman of the Council of Ministers of the Union of Russia and Belarus. He became acting President on 31 December 1999, when...
appointed Lavrov to the post of Minister for Foreign Affairs. He succeeded Igor Ivanov
Igor Ivanov
Igor Sergeyevich Ivanov is a Russian politician and was Russian Foreign Minister from 1998 to 2004.- Early life :...
in the post.

Lavrov is regarded as continuing the style of his predecessor: a brilliant diplomat but a civil servant rather than a politician, Russia's foreign policy being largely determined by the President of the Russian Federation. Dr Bobo Lo, a Russian foreign policy expert at London's Chatham House has described him as "a tough, reliable, extremely sophisticated negotiator", but adding that "he's not part of Putin's inner sanctum" and that the toughening of Russian foreign policy has got very little to do with him.

Mr. Lavrov is married and has a daughter, Ekaterina. His hobbies include playing the guitar and writing songs and poetry. He is a keen sportsman and a heavy chain smoker.