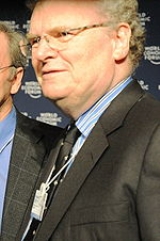 Encyclopedia
Sir Howard Stringer is a Welsh
Wales
Wales is a country that is part of the United Kingdom and the island of Great Britain, bordered by England to its east and the Atlantic Ocean and Irish Sea to its west. It has a population of three million, and a total area of 20,779 km²...
-born American businessman and the chairman, president
President
A president is a leader of an organization, company, trade union, university, or country.Etymologically, a president is one who presides, who sits in leadership...
and CEO of Sony Corporation
Sony
, commonly referred to as Sony, is a Japanese multinational conglomerate corporation headquartered in Minato, Tokyo, Japan and the world's fifth largest media conglomerate measured by revenues....
.

Stringer was born in Cardiff, Wales, the son of Marjorie Mary (née Pook), a Welsh schoolteacher, and Harry Stringer, an English sergeant in the Royal Air Force
Royal Air Force
The Royal Air Force is the aerial warfare service branch of the British Armed Forces. Formed on 1 April 1918, it is the oldest independent air force in the world...
. He emigrated to the United States
United States
The United States of America is a federal constitutional republic comprising fifty states and a federal district...
in 1965, and drafted
Conscription
Conscription is the compulsory enlistment of people in some sort of national service, most often military service. Conscription dates back to antiquity and continues in some countries to the present day under various names...
into United States Army
United States Army
The United States Army is the main branch of the United States Armed Forces responsible for land-based military operations. It is the largest and oldest established branch of the U.S. military, and is one of seven U.S. uniformed services...
during the Vietnam War
Vietnam War
The Vietnam War was a Cold War-era military conflict that occurred in Vietnam, Laos, and Cambodia from 1 November 1955 to the fall of Saigon on 30 April 1975. This war followed the First Indochina War and was fought between North Vietnam, supported by its communist allies, and the government of...
. Stringer became a naturalized citizen in 1985 and now holds dual US-UK citizenship. His younger brother, Rob Stringer
Rob Stringer
Rob Stringer is Chairman of the Columbia Records, which is part of Sony Music Entertainment.He is the younger brother of Sir Howard Stringer, who is Chairman and CEO of Sony Corporation.-References:...
, is chairman of Sony Music Label Group. In 1978, Stringer married Jennifer A. Kinmond Patterson. They have two children.

Stringer attended Oundle School
Oundle School
Oundle School is a co-educational British public school located in the ancient market town of Oundle in Northamptonshire. The school has been maintained by the Worshipful Company of Grocers of the City of London since its foundation in 1556. Oundle has eight boys' houses, five girls' houses, a day...
in Northamptonshire
Northamptonshire
Northamptonshire is a landlocked county in the English East Midlands, with a population of 629,676 as at the 2001 census. It has boundaries with the ceremonial counties of Warwickshire to the west, Leicestershire and Rutland to the north, Cambridgeshire to the east, Bedfordshire to the south-east,...
and received a Master of Arts from the University of Oxford
University of Oxford
The University of Oxford is a university located in Oxford, United Kingdom. It is the second-oldest surviving university in the world and the oldest in the English-speaking world. Although its exact date of foundation is unclear, there is evidence of teaching as far back as 1096...
in Modern History
Modern history
Modern history, or the modern era, describes the historical timeline after the Middle Ages. Modern history can be further broken down into the early modern period and the late modern period after the French Revolution and the Industrial Revolution...
. He was knighted
Knight Bachelor
The rank of Knight Bachelor is a part of the British honours system. It is the most basic rank of a man who has been knighted by the monarch but not as a member of one of the organised Orders of Chivalry...
by Queen Elizabeth II on December 31, 1999.

Stringer had a 30-year career at CBS
CBS
CBS Broadcasting Inc. is a major US commercial broadcasting television network, which started as a radio network. The name is derived from the initials of the network's former name, Columbia Broadcasting System. The network is sometimes referred to as the "Eye Network" in reference to the shape of...
, where he was a journalist, producer and senior executive. He served as president of CBS from 1988 to 1995, where he was responsible for all the broadcast activities of its entertainment, news, sports, radio and television stations.


Highlights of his career at CBS

Stringer previously was head of the Sony Corporation of America
Sony Corporation of America
Sony Corporation of America , based in New York, is the United States subsidiary of Japan's Sony Corporation, headquartered in Tokyo. It is the umbrella company under which all Sony companies operate in the United States....
and was promoted to the company's top position as the corporation overall was having trouble with losses and was facing increasing competition from rivals like Samsung
Samsung
The Samsung Group is a South Korean multinational conglomerate corporation headquartered in Samsung Town, Seoul, South Korea...
, Sharp
Sharp Corporation
is a Japanese multinational corporation that designs and manufactures electronic products. Headquartered in Abeno-ku, Osaka, Japan, Sharp employs more than 55,580 people worldwide as of June 2011. The company was founded in September 1912 and takes its name from one of its founder's first...
, Apple Inc. and Panasonic
Panasonic
Panasonic is an international brand name for Japanese electric products manufacturer Panasonic Corporation, which was formerly known as Matsushita Electric Industrial Co., Ltd...
. With his experience primarily in the media industry, Stringer was responsible for the media business of Sony in the U.S. by overseeing the release of the Spider-Man
Spider-Man
Spider-Man is a fictional Marvel Comics superhero. The character was created by writer-editor Stan Lee and writer-artist Steve Ditko. He first appeared in Amazing Fantasy #15...
movie series, among others.

In his capacity as CEO of Sony, Stringer principally resides in Tokyo
Tokyo
, ; officially , is one of the 47 prefectures of Japan. Tokyo is the capital of Japan, the center of the Greater Tokyo Area, and the largest metropolitan area of Japan. It is the seat of the Japanese government and the Imperial Palace, and the home of the Japanese Imperial Family...
, though he frequently visits USA New York City
New York City
New York is the most populous city in the United States and the center of the New York Metropolitan Area, one of the most populous metropolitan areas in the world. New York exerts a significant impact upon global commerce, finance, media, art, fashion, research, technology, education, and...
and China Bejingand Hong Kong
Hong Kong
Hong Kong is one of two Special Administrative Regions of the People's Republic of China , the other being Macau. A city-state situated on China's south coast and enclosed by the Pearl River Delta and South China Sea, it is renowned for its expansive skyline and deep natural harbour...
and Los Angeles
Los Ángeles
Los Ángeles is the capital of the province of Biobío, in the commune of the same name, in Region VIII , in the center-south of Chile. It is located between the Laja and Biobío rivers. The population is 123,445 inhabitants...
for E3 Electronic Entertainment Expo. Las Vegas
Las Vegas
Las Vegas may refer to:* Las Vegas Valley, consisting of Las Vegas and surrounding areas** Las Vegas, Nevada, the city** Las Vegas Strip, the resort destination and location of many of the largest hotel and casino resorts in the world...
for CES
CES
CES may stand for:*Closed ecological system, an ecosystem that does not rely on matter exchange with any part outside the system*Constant elasticity of substitution, an economics production function*The ISO 639 code for the Czech language...
and UKEngland
England
England is a country that is part of the United Kingdom. It shares land borders with Scotland to the north and Wales to the west; the Irish Sea is to the north west, the Celtic Sea to the south west, with the North Sea to the east and the English Channel to the south separating it from continental...
London
London
London is the capital city of :England and the :United Kingdom, the largest metropolitan area in the United Kingdom, and the largest urban zone in the European Union by most measures. Located on the River Thames, London has been a major settlement for two millennia, its history going back to its...
.