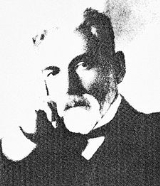 Encyclopedia
Hovhannes Katchaznouni (Akhaltsikhe
Akhaltsikhe
Akhaltsikhe is a small city in Georgia's southwestern region of Samtskhe-Javakheti. It is situated on the both banks of a small river Potskhovi, which separates the city to the old city in the north and new in the south. The name of the city translates from Georgian as "new fortress".- History...
, Georgia
Georgia (country)
Georgia is a sovereign state in the Caucasus region of Eurasia. Located at the crossroads of Western Asia and Eastern Europe, it is bounded to the west by the Black Sea, to the north by Russia, to the southwest by Turkey, to the south by Armenia, and to the southeast by Azerbaijan. The capital of...
1868 – Yerevan
Yerevan
Yerevan is the capital and largest city of Armenia and one of the world's oldest continuously-inhabited cities. Situated along the Hrazdan River, Yerevan is the administrative, cultural, and industrial center of the country...
, Armenia
Armenia
Armenia , officially the Republic of Armenia , is a landlocked mountainous country in the Caucasus region of Eurasia...
1938) was the first Prime Minister
Prime Minister of Armenia
The Prime Minister of Armenia is the most senior minister within the Armenian government, and is required by the constitution to "oversee the Government's regular activities and coordinate the work of the Ministers." The Prime Minister is appointed by the President of Armenia, but can be removed by...
of the Democratic Republic of Armenia
Democratic Republic of Armenia
The Democratic Republic of Armenia was the first modern establishment of an Armenian state...
from May 30, 1918 to May 28, 1919. He was a member of the Armenian Revolutionary Federation
Armenian Revolutionary Federation
The Armenian Revolutionary Federation is an Armenian political party founded in Tiflis in 1890 by Christapor Mikaelian, Stepan Zorian, and Simon Zavarian...
.

Hovhannes Katchaznouni was born in 1868 in the town of Akhaltsikhe
Akhaltsikhe
Akhaltsikhe is a small city in Georgia's southwestern region of Samtskhe-Javakheti. It is situated on the both banks of a small river Potskhovi, which separates the city to the old city in the north and new in the south. The name of the city translates from Georgian as "new fortress".- History...
, then part of the Russian Empire, now part of Georgia
Georgia (country)
Georgia is a sovereign state in the Caucasus region of Eurasia. Located at the crossroads of Western Asia and Eastern Europe, it is bounded to the west by the Black Sea, to the north by Russia, to the southwest by Turkey, to the south by Armenia, and to the southeast by Azerbaijan. The capital of...
. He attended secondary school in Tiflis from 1877 to 1886. In 1887 he moved to St. Petersburg and was accepted into the Citizens' Architectural Institute, graduating from there with honors in 1893. During his time in St. Petersburg he joining the Dashnaktsutyun
Armenian Revolutionary Federation
The Armenian Revolutionary Federation is an Armenian political party founded in Tiflis in 1890 by Christapor Mikaelian, Stepan Zorian, and Simon Zavarian...
political party, eventually becoming one of its most important members. After graduating he worked at the Baku provincial administration from 1893-1895 in the construction department, then as an architect in Batumi from 1895–1897, and then from 1897-1899 as regional architect at the Tiflis provincial administration. He worked as a senior architect in Baku from 1899–1906, designing hospitals and apartment buildings. After 1906 he devoted himself to political and social activities. In 1911 he was required to leave the Caucasus region by a St. Petersburg court ruling because of his activities involving Dashnaktsutyun.

In 1914 he was able to return to his homeland. He became a member of the Armenian National Council in 1917 and was the Dashnak representative in the Seym (the Caucasian Parliament) until 1918. He was on the Armenian committee that conducted peace talks with the Ottoman Empire in Trabzon
Trabzon
Trabzon is a city on the Black Sea coast of north-eastern Turkey and the capital of Trabzon Province. Trabzon, located on the historical Silk Road, became a melting pot of religions, languages and culture for centuries and a trade gateway to Iran in the southeast and the Caucasus to the northeast...
and Batoum. After the dissolution of the Transcaucasian Federation, he became the first Prime Minister of the independent Armenian state in 1918. He held this position until August 1919. He was arrested after the Bolshevik
Bolshevik
The Bolsheviks, originally also Bolshevists , derived from bol'shinstvo, "majority") were a faction of the Marxist Russian Social Democratic Labour Party which split apart from the Menshevik faction at the Second Party Congress in 1903....
s came to power in Armenia in 1920. He left Armenia after the 1921 counter-revolutionary revolt against Bolshevik rule was suppressed. Between 1921 and 1924 he lived in Bucharest
Bucharest
Bucharest is the capital municipality, cultural, industrial, and financial centre of Romania. It is the largest city in Romania, located in the southeast of the country, at , and lies on the banks of the Dâmbovița River....
. In 1925 he returned to Soviet Armenia, to work as an architect in Leninakan. He also taught at Yerevan State University
Yerevan State University
Yerevan State University is a university in Yerevan, Armenia. Founded on May 16 1919, it is the largest university in the country with 110 departments. Of its 3,150 employees, 1,190 comprise the teaching staff which includes 25 academicians, 130 professors, 700 docents , and 360 assistant lecturers...
's technical department, giving lectures on construction and architecture. He joined the Construction Institute on its establishment in 1930 and attained the title of professor there.

Katchaznouni became a victim of Stalin's Great Terror
Great Purge
The Great Purge was a series of campaigns of political repression and persecution in the Soviet Union orchestrated by Joseph Stalin from 1936 to 1938...
. He was arrested in 1937 and imprisoned. The exact date of his death is unknown, it happened in 1937 or 1938.

Katchaznouni prepared a critical report for the April 1923 ARF congress in Bucharest titled "The Federation Has Nothing More to Do," which called for the dissolution of the Party and Armenian support of Soviet Armenia. Its incendiary claims immediately drew rebuke from the party. Until recently, the report was best known through its abridged English translation by Matthew Aram Callender, The Armenian Revolutionary Federation (Dashnagtzoutiun) Has Nothing to Do Any More and edited by Avedis Boghos Derounian
John Roy Carlson
John Roy Carlson is one of the many pen names of Avedis Boghos Derounian, the journalist and best-selling author of Under Cover....
. The translation emanated from the New York branch of the Armenian General Benevolent Union
Armenian General Benevolent Union
The Armenian General Benevolent Union abbreviated as AGBU, is a non-profit Armenian organization. It was established in Cairo, Egypt in 1906...
's Armenian Information Service. The booklet's elusive nature can be attributed to the fact that the Congress was "highly secret and closed to the public" with little information about its circumstances being released, and the fact that remaining copies have been "banned from ARF
ARF
-Organizations:* Advertising Research Foundation* Animal Rescue Foundation* Animal Rights Federation, an animal rights advocacy organization* Armenian Revolutionary Federation* Armtec Infrastructur Co.'s ticker symbol as of 2011...
clubs and libraries for decades afterwards."

Recently, a historian from Istanbul University
Istanbul University
Istanbul University is a Turkish university located in Istanbul. The main campus is adjacent to Beyazıt Square.- Synopsis :A madrasa, a religious school, was established sometime in the 15th century after the Ottoman conquest of Constantinople. An institution of higher education named the...
named Mehmet Perinçek found an unabridged Russian copy (printed in Tblisi, 1927) of the book in the Russian State Library
Russian State Library
The Russian State Library is the national library of Russia, located in Moscow. It is the largest in the country and the third largest in the world for its collection of books . It was named the V. I...
in Moscow
Moscow
Moscow is the capital, the most populous city, and the most populous federal subject of Russia. The city is a major political, economic, cultural, scientific, religious, financial, educational, and transportation centre of Russia and the continent...
. Perinçek said that he was the first person to have entered the Russian State archives (due to a simple absence of applications), and that he has spent seven years studying them.

Though this story might be credible, it is disputed by some Armenian intellectuals like Viken L. Attarian, who claim that all of this "discoveries" are actually forgeries of this document, made by alleged Turkish unscrupulous historians to rebuke the fact of the Armenian Genocide, which is proven by the fact that translations of the text into several other languages were published by Kaynak Press, Istanbul, as part of a book series titled "The Lie of 'Armenian Genocide
Armenian Genocide
The Armenian Genocide—also known as the Armenian Holocaust, the Armenian Massacres and, by Armenians, as the Great Crime—refers to the deliberate and systematic destruction of the Armenian population of the Ottoman Empire during and just after World War I...
' in Armenian Documents".
The source of this article is wikipedia, the free encyclopedia.  The text of this article is licensed under the GFDL.