Encyclopedia
Akhaltsikhe is a small city in Georgia
Georgia (country)
Georgia is a sovereign state in the Caucasus region of Eurasia. Located at the crossroads of Western Asia and Eastern Europe, it is bounded to the west by the Black Sea, to the north by Russia, to the southwest by Turkey, to the south by Armenia, and to the southeast by Azerbaijan. The capital of...
's southwestern region (mkhare
Mkhare
Mkhare is a subdivision in the country of Georgia. It is usually translated as region.The country is divided, according to the Presidential decrees from 1994 to 1996, into regions on a provisional basis until the secessionist conflicts in Abkhazia and South Ossetia are resolved...
) of Samtskhe-Javakheti. It is situated on the both banks of a small river Potskhovi, which separates the city to the old city in the north and new in the south. The name of the city translates from Georgian as "new fortress". 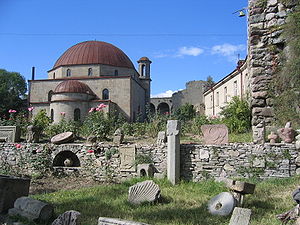 The city is first mentioned in the chronicles in the 12th century. In the 12th - 13th centuries it was the seat of the Akhaltsikheli
Akhaltsikheli
Akhaltsikheli were a Georgian noble family prominent in the end of the 12th to the mid-13th centuries. Their name came from the city of Akhaltsikhe, their original fiefdom....
s, dukes of Samtskhe, whose two most illustrious representatives were Shalva and Ivane Akhaltsikheli (of Akhaltsikhe). From the 13th up to the 17th century the city and Samtkhe were governed by the feudal family of the Jaqeli
Jaqeli
Jaqeli was a Georgian noble family, an offshoot of the House of Chorchaneli, that rose to a ruling house of the principality of Samtskhe in the 13th century, and eventually Islamized to become a dynasty of Akhaltsikhe under the Ottoman Empire in the 16th/17th century.-History:"Jaqeli", literally...
s. In 1576 the Ottomans
Ottoman Empire
The Ottoman EmpireIt was usually referred to as the "Ottoman Empire", the "Turkish Empire", the "Ottoman Caliphate" or more commonly "Turkey" by its contemporaries...
took it and from 1628 the city became the centre of the Samtskhe Eyalet of the Ottoman Empire. In 1828, during the Russo-Turkish War
Russo-Turkish War, 1828-1829
The Russo–Turkish War of 1828–1829 was sparked by the Greek War of Independence. The war broke out after the Sultan, incensed by the Russian participation in the Battle of Navarino, closed the Dardanelles for Russian ships and revoked the Akkerman Convention....
of 1828-1829, Russian troops under the command of General Paskevich
Ivan Paskevich
Ivan Fyodorovich Paskevich was a Ukrainian-born military leader. For his victories, he was made Count of Erivan in 1828 and Namestnik of the Kingdom of Poland in 1831...
captured the city and, as a consequence of the 1829 Treaty of Adrianople
Treaty of Adrianople
The Peace Treaty of Adrianople concluded the Russo-Turkish War, 1828-1829 between Russia and the Ottoman Empire. It was signed on September 14, 1829 in Adrianople by Russia's Count Alexey Fyodorovich Orlov and by Turkey's Abdul Kadyr-bey...
(Edirne), it was ceded to the Russian Empire as part of first Kutaisi
Kutaisi
Kutaisi is Georgia's second largest city and the capital of the western region of Imereti. It is 221 km to the west of Tbilisi.-Geography:...
and then Tbilisi
Tbilisi
Tbilisi is the capital and the largest city of Georgia, lying on the banks of the Mt'k'vari River. The name is derived from an early Georgian form T'pilisi and it was officially known as Tiflis until 1936...
governorates
Guberniya
A guberniya was a major administrative subdivision of the Russian Empire usually translated as government, governorate, or province. Such administrative division was preserved for sometime upon the collapse of the empire in 1917. A guberniya was ruled by a governor , a word borrowed from Latin ,...
. In the old part of the city one can see an old fortress, castle and mosque, the old fortress of the Jakelis (13th-14th century), and St. Marine's Church. The hills nearby the city harbour the Sapara Monastery
Sapara Monastery
Sapara Monastery is a Georgian Orthodox monastery in the Akhaltsikhe District of Samtskhe-Javakheti region, Georgia.- History :It has existed from at least the 9th century, and has numbered among its monks many important figures in Georgian ecclesiastical history...
(10th - 14th centuries).
In the late 1980s the city was host to the Soviet Army
Soviet Army
The Soviet Army is the name given to the main part of the Armed Forces of the Soviet Union between 1946 and 1992. Previously, it had been known as the Red Army. Informally, Армия referred to all the MOD armed forces, except, in some cases, the Soviet Navy.This article covers the Soviet Ground...
's 10th Guards Motor Rifle Division
10th Guards Motor Rifle Division
The 10th Guards Motor Rifle Division was a division of the Soviet Ground Forces. The full name of its predecessor division was the "10th Guards Rifle Pechengskii twice Red Banner, Order of Alexander Nevsky and the Red Star division"...
, which became a brigade
Brigade
A brigade is a major tactical military formation that is typically composed of two to five battalions, plus supporting elements depending on the era and nationality of a given army and could be perceived as an enlarged/reinforced regiment...
of the Georgian land forces after the fall of the Soviet Union.

According to the 2002 Census, the city's population with the many surrounding villages was 46,134. The city proper is currently estimated by locals to be about 20,000. In 2002 the majority were ethnic Georgians (28473, or 61%), with minority of Armenians
Armenians
Armenian people or Armenians are a nation and ethnic group native to the Armenian Highland.The largest concentration is in Armenia having a nearly-homogeneous population with 97.9% or 3,145,354 being ethnic Armenian....
(16879, or 37%).

Akhaltsikhe is twinned
Town twinning
Twin towns and sister cities are two of many terms used to describe the cooperative agreements between towns, cities, and even counties in geographically and politically distinct areas to promote cultural and commercial ties.- Terminology :...
with: