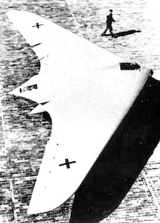 Encyclopedia
Walter Horten and Reimar Horten (12 March 1915 - 14 March 1994 Villa General Belgrano
Villa General Belgrano
Villa General Belgrano, a small mountain village of 6,260 inhabitants is named after the creator of the Argentine flag Manuel Belgrano and located in a lush green valley of Calamuchita in the hills in the Province of Córdoba in central Argentina.-History:...
, Argentina
Argentina
Argentina , officially the Argentine Republic , is the second largest country in South America by land area, after Brazil. It is constituted as a federation of 23 provinces and an autonomous city, Buenos Aires...
), sometimes credited as the Horten Brothers, were German
Germany
Germany , officially the Federal Republic of Germany , is a federal parliamentary republic in Europe. The country consists of 16 states while the capital and largest city is Berlin. Germany covers an area of 357,021 km2 and has a largely temperate seasonal climate...
aircraft pilots and enthusiasts, and members of the Hitler Youth
Hitler Youth
The Hitler Youth was a paramilitary organization of the Nazi Party. It existed from 1922 to 1945. The HJ was the second oldest paramilitary Nazi group, founded one year after its adult counterpart, the Sturmabteilung...
and Nazi party. Although they had little, if any, formal training in aeronautics or related fields, the Hortens designed some of the most advanced aircraft of the 1940s, including the world's first jet-powered flying wing, the Horten Ho 229
Horten Ho 229
The Horten H.IX, RLM designation Ho 229 was a late–World War II prototype fighter/bomber designed by Reimar and Walter Horten and built by Gothaer Waggonfabrik...
.

Between the World Wars, the Treaty of Versailles
Treaty of Versailles
The Treaty of Versailles was one of the peace treaties at the end of World War I. It ended the state of war between Germany and the Allied Powers. It was signed on 28 June 1919, exactly five years after the assassination of Archduke Franz Ferdinand. The other Central Powers on the German side of...
limited the construction of German military airplanes. In response, German military flying became semi-clandestine, taking the form of civil 'clubs' where students trained on gliders under the supervision of decommissioned World War I
World War I
World War I , which was predominantly called the World War or the Great War from its occurrence until 1939, and the First World War or World War I thereafter, was a major war centred in Europe that began on 28 July 1914 and lasted until 11 November 1918...
veterans. As teenagers, the Horten brothers became involved in such flying clubs.

This back-to-the-basics education, and an admiration of German avant-aircraft designer Alexander Lippisch
Alexander Lippisch
Alexander Martin Lippisch was a German pioneer of aerodynamics. He made important contributions to the understanding of flying wings, delta wings and the ground effect. His most famous design is the Messerschmitt Me 163 rocket-powered interceptor.Lippisch was born in Munich, Kingdom of Bavaria...
, led the Hortens away from the dominant design trends of the 1920s and '30s, and toward experimenting with alternative airframes—building models and then filling their parents' house with full-sized wooden sailplanes. The first Horten glider flew in 1933, by which time both brothers were members of the Hitler Youth
Hitler Youth
The Hitler Youth was a paramilitary organization of the Nazi Party. It existed from 1922 to 1945. The HJ was the second oldest paramilitary Nazi group, founded one year after its adult counterpart, the Sturmabteilung...
.

By 1939, with Adolf Hitler
Adolf Hitler
Adolf Hitler was an Austrian-born German politician and the leader of the National Socialist German Workers Party , commonly referred to as the Nazi Party). He was Chancellor of Germany from 1933 to 1945, and head of state from 1934 to 1945...
in power and the Treaty of Versailles no longer in effect, Walter and Reimar had entered the Luftwaffe
Luftwaffe
Luftwaffe is a generic German term for an air force. It is also the official name for two of the four historic German air forces, the Wehrmacht air arm founded in 1935 and disbanded in 1946; and the current Bundeswehr air arm founded in 1956....
as pilots. (A third brother, Wolfram, was killed flying a bomber over Dunkirk.) They were also called upon as design consultants, though Germany's aeronautical community tended to regard the Hortens not as part of the cultural elite.

Walter participated in the Battle of Britain, secretly flying as the wingman for Adolf Galland
Adolf Galland
Adolf "Dolfo" Joseph Ferdinand Galland was a German Luftwaffe General and flying ace who served throughout World War II in Europe. He flew 705 combat missions, and fought on the Western and the Defence of the Reich fronts...
, and shot down seven British aircraft.

In 1937, the Hortens began using motorized airplanes, with the debut of the twin-engined pusher
Pusher configuration
In a craft with a pusher configuration the propeller are mounted behind their respective engine. According to Bill Gunston, a "pusher propeller" is one mounted behind engine so that drive shaft is in compression...
-prop airplane H.VII (an earlier glider had a mule engine). The Luftwaffe, however, did not actually use many of the Hortens' designs until 1942, but gave enthusiastic support to a twin-turbojet-powered fighter
Fighter aircraft
A fighter aircraft is a military aircraft designed primarily for air-to-air combat with other aircraft, as opposed to a bomber, which is designed primarily to attack ground targets...
/bomber design, designated under wartime protocols as the Horten H.IX
Horten Ho 229
The Horten H.IX, RLM designation Ho 229 was a late–World War II prototype fighter/bomber designed by Reimar and Walter Horten and built by Gothaer Waggonfabrik...
. For their completion of the Ho 229 prototypes, the Horton brothers were awarded 500,000 Reichmarks.

Securing the allocation of turbojets was difficult in wartime Germany, as other projects carried higher priority due to their rank in the overall war effort.
Although the turbojet-equipped Ho IX V2 nearly reached a then-astonishing 500 mph in trials, the project was soon given over to the theretofore low-tech aircraft company, Gothaer Waggonfabrik
Gothaer Waggonfabrik
Gothaer Waggonfabrik was a German manufacturer of rolling stock established in the late nineteenth century at Gotha. During the two world wars, the company expanded into aircraft building.-World War I:...
, as the Horten Ho 229 (subsequently often erroneously called Gotha Go 229). The Ho 229 was captured by the U.S. Army at the end of World War 2, in which the completed but unflown V3 third prototype aircraft is presently housed at the Smithsonian Institution
Smithsonian Institution
The Smithsonian Institution is an educational and research institute and associated museum complex, administered and funded by the government of the United States and by funds from its endowment, contributions, and profits from its retail operations, concessions, licensing activities, and magazines...
in Washington D.C.

The Ho 229 was a fighter jet with great potential, but arrived too late to see service. Among other advanced Horten designs of the 1940s was the supersonic delta-wing H.X, designed as a hybrid turbojet/rocket fighter with a top speed of Mach 1.4, but tested only in glider form (as the Horten H.XIII). Its revolutionary stealth design included a special carbon layer that was able to reduce the radar range detection. The Horten brothers also worked on the Horten H.XVIII, an intercontinental bomber that was part of the Amerika Bomber
Amerika Bomber
The Amerika-Bomber project was an initiative of the Reichsluftfahrtministerium, the Nazi Germany Air Ministry, to obtain a long-range strategic bomber for the Luftwaffe that would be capable of striking the continental United States from Germany, a range of about 5,800 km...
project.

As the war ended, Reimar Horten emigrated to Argentina
Argentina
Argentina , officially the Argentine Republic , is the second largest country in South America by land area, after Brazil. It is constituted as a federation of 23 provinces and an autonomous city, Buenos Aires...
after failed negotiations with the United Kingdom and China, where he continued designing and building gliders and one twin-engined flying wing transport, which was unsuccessful commercially. Walter remained in Germany after the war and became an officer in the post-war German Air Force Luftwaffe
Luftwaffe
Luftwaffe is a generic German term for an air force. It is also the official name for two of the four historic German air forces, the Wehrmacht air arm founded in 1935 and disbanded in 1946; and the current Bundeswehr air arm founded in 1956....
. Reimar died on his ranch in Argentina in 1994, while Walter died in Germany in 1998.

In the late 1940s, the personnel of Project Sign
Project Sign
Project Sign was an official U.S. government study of unidentified flying objects undertaken by the United States Air Force and active for most of 1948....
, the U.S. Air Force's flying saucer
Flying saucer
A flying saucer is a type of unidentified flying object sometimes believed to be of alien origin with a disc or saucer-shaped body, usually described as silver or metallic, occasionally reported as covered with running lights or surrounded with a glowing light, hovering or moving rapidly either...
investigation, seriously considered the possibility that UFOs might have been secret aircraft manufactured by the U.S.S.R. based on the Hortens' designs.