Encyclopedia
The Northrop YB-49 was a prototype jet
Jet engine
A jet engine is a reaction engine that discharges a fast moving jet to generate thrust by jet propulsion and in accordance with Newton's laws of motion. This broad definition of jet engines includes turbojets, turbofans, rockets, ramjets, pulse jets...
-powered heavy bomber aircraft developed by Northrop
Northrop Corporation
Northrop Corporation was a leading United States aircraft manufacturer from its formation in 1939 until its merger with Grumman to form Northrop Grumman in 1994. The company is known for its development of the flying wing design, although only a few of these have entered service.-History:Jack...
shortly after World War II
World War II
World War II, or the Second World War , was a global conflict lasting from 1939 to 1945, involving most of the world's nations—including all of the great powers—eventually forming two opposing military alliances: the Allies and the Axis...
. Intended for service with the U.S. Air Force
United States Air Force
The United States Air Force is the aerial warfare service branch of the United States Armed Forces and one of the American uniformed services. Initially part of the United States Army, the USAF was formed as a separate branch of the military on September 18, 1947 under the National Security Act of...
, the YB-49 featured a flying wing
Flying wing
A flying wing is a tailless fixed-wing aircraft which has no definite fuselage, with most of the crew, payload and equipment being housed inside the main wing structure....
design. It was a jet-powered development of the earlier, piston-engined Northrop XB-35 and YB-35
Northrop YB-35
The Northrop XB-35 and YB-35 were experimental heavy bomber aircraft developed for the United States Army Air Forces during and shortly after World War II by the Northrop Corporation. It used the radical and potentially very efficient flying wing design, in which the tail section and fuselage are...
; the two YB-49s actually built were both converted YB-35 test aircraft.

The YB-49 never entered production, being passed over in favor of the more conventional Convair B-36 Peacemaker piston-driven design. Design work performed in the development of the YB-35 and YB-49, nonetheless, proved to be valuable to Northrop in the eventual development of the current day B-2 Spirit strategic bomber, which first entered operational service in the 1990s.

With the XB-35 program seriously behind schedule by 1944, and the end of piston-engined combat aircraft in sight, the production contract for this propeller driven type was cancelled in May of that year. Nevertheless, the Flying Wing design was still sufficiently interesting to the Air Force that work was continued on testing a single YB-35A production aircraft.

Among the aircraft later completed were two airframes that the Air Force ordered be fitted with jet propulsion and designated as YB-49s. The first of these new YB-49 jet-powered aircraft flew on 21 October 1947 and immediately proved more promising than its piston-engined counterpart. The YB-49 set an unofficial endurance record of staying continually above 40,000 ft (12,200 m) for 6.5 hours.

The second YB-49 was lost on 5 June 1948, killing its pilot, Major Daniel Forbes
Daniel Forbes
Daniel Hugh Forbes, Jr. was an American aviator.-Biography:Born in Carbondale, Kansas, Osage County, the only child of Daniel Sr., and Hattie Forbes of Topeka, Kansas...
for whom Forbes Air Force Base
Forbes Air Force Base
Forbes Field, previously Forbes Air Force Base, is a joint-use civil-military airport operated by the Topeka Airport Authority located approximately south of Topeka, Kansas....
was named, Captain Glen Edwards
Glen Edwards (pilot)
Glen Edwards was a test pilot for the U.S. Air Force, and is the namesake of Edwards Air Force Base.Edwards was born in Medicine Hat, Alberta, Canada, where he lived until 1931. At age 13, his parents moved the family to California, settling in Lincoln, northeast of Sacramento...
, co-pilot (after whom Edwards Air Force Base
Edwards Air Force Base
Edwards Air Force Base is a United States Air Force base located on the border of Kern County, Los Angeles County, and San Bernardino County, California, in the Antelope Valley. It is southwest of the central business district of North Edwards, California and due east of Rosamond.It is named in...
is named), and three other crew members, one of whom, Lt. Edward Lee Swindell was a crew member on the Boeing B-29 that assisted Chuck Yeager
Chuck Yeager
Charles Elwood "Chuck" Yeager is a retired major general in the United States Air Force and noted test pilot. He was the first pilot to travel faster than sound...
in breaking the sound barrier in the Bell X-1
Bell X-1
The Bell X-1, originally designated XS-1, was a joint NACA-U.S. Army/US Air Force supersonic research project built by Bell Aircraft. Conceived in 1944 and designed and built over 1945, it eventually reached nearly 1,000 mph in 1948...
aircraft. Their aircraft suffered structural failure, with both outer wing sections becoming detached from the center section. Speculation at the time was that the YB-49 was lost due to excessive pullout loads imposed on the airframe when a planned stall recovery resulted in a high speed, nose-over dive. The post-stall high speed dive resulted from the clean, low-drag design, which gave the YB-49 a rapid speed increase in any type of dive.

The last operational YB-49 prototype was destroyed on March 15, 1950 during high-speed taxi trials at Muroc Field. The nosewheel began to encounter severe vibration problems and finally collapsed. The aircraft was completely destroyed in the ensuing fire. The taxi trials took place with the YB-49's fuel tanks full, an unusual testing procedure, fanning further speculation of industrial sabotage of the aircraft.

Bombing target tests showed a tendency of Flying Wings to "hunt" in yaw after turns and when flying in "disturbed" air, degraded bombing accuracy. It was thought that one of the new Honeywell autopilots, with yaw damping, would correct this flaw.

One YRB-49A had been completed when, in September 1948, the Air Force ordered the type into full production as the RB-49A reconnaissance aircraft. It was powered by six jet engines, two of them externally mounted in under wing pods, ruining the aircraft's sleek, aerodynamic lines, but extending its range by carrying additional fuel. The use of jet engines had resulted in considerably increased fuel consumption, and decreased its range significantly below that of the rivaling Convair B-36.

During early 1950, the remaining YB-35Bs airframes being converted to YRB-49As were scrapped. Flight testing of the sole remaining YB-49 prototype ended 14 March 1950. On 15 March 1950, that program was canceled, and coincidentally, that last YB-49 prototype suffered a high-speed taxiing accident and, as previously noted, was totally destroyed in the ensuing fire.

All remaining Flying Wing bomber airframes, except for the sole YRB-49A reconnaissance version, were then ordered chopped up by the Air Force, the materials smelted down with portable smelters brought to Northrop's facility, in plain sight of its employees. Jack Northrop retired from both the company he founded and aviation shortly after he saw his dream of a pure, all-wing aircraft destroyed. His son, John Northrop Jr., later recounted during an interview his father's devastation and life-long suspicion that his Flying Wing project had been sabotaged by political influence and back room wheeling-and-dealing between Convair and the Air Force.

The sole prototype reconnaissance platform, the YRB-49A, first flew on 4 May 1950. After only 13 flights, testing ended abruptly on 26 April 1951. It was then flown back to Northrop's headquarters from Edwards Air Force Base (formally Muroc) on what would be its last flight. There, this remaining Flying Wing sat at edge of Northrop's Ontario airport for more than two years, abandoned. It was finally ordered scrapped on 1 December 1953.

But in a 1979 videotaped news interview, Jack Northrop broke his long silence and said publicly that all flying wing contracts had been canceled because Northrop Aircraft Corporation had refused to merge with competitor Convair
Convair
Convair was an American aircraft manufacturing company which later expanded into rockets and spacecraft. The company was formed in 1943 by the merger of Vultee Aircraft and Consolidated Aircraft, and went on to produce a number of pioneering aircraft, such as the Convair B-36 bomber, and the F-102...
at Stuart Symington's strong suggestion, because according to Jack Northrop, Convair's merger demands were "grossly unfair to Northrop.". A short while later, Symington became president of Convair upon leaving his post as Secretary of the Air Force. Allegations of political influences in the cancellation of the Flying Wing were investigated by the House Armed Services Committee, where Symington publicly denied exerting pressure on Northrup to merge.

The YB-49 and its modern counterpart, the B-2 Spirit, both built by Northrop, have the same wingspan: 172.0 ft (52.4 m). Flight test data collected from the original YB-49 test flights, including the aircraft's (then) undervalued invisibility to early radar systems, was used in the development of the B-2 bomber.

Thirty years later, in April 1980, Jack Northrop, now quite elderly and wheel chair bound, was taken back to the company he founded. There, he was ushered into a classified area and shown a scale model of the Air Force's forthcoming but still highly classified Advanced Technology Bomber, which would eventually become known as the B-2A; it was a sleek, all-black Flying Wing. Looking over its all-wing design, Northrop, unable to speak due to various illnesses, was reported to have written on a pad: "I know why God has kept me alive for the past 25 years." Jack Northrop died 10 months later, in February 1981, eight years before the first B-2A became the Air Force's most advanced bomber aircraft. 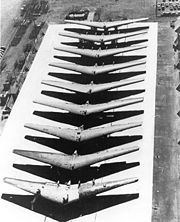