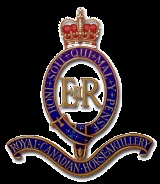 Encyclopedia
The Royal Canadian Horse Artillery is the name given to the regular field artillery units of the Canadian Army. RCHA units are the senior units of the Canadian land field force, with a history dating back to the birth of Canada
Canada
Canada is a North American country consisting of ten provinces and three territories. Located in the northern part of the continent, it extends from the Atlantic Ocean in the east to the Pacific Ocean in the west, and northward into the Arctic Ocean...
as a nation. 'A' and 'B' Batteries of Garrison Artillery were formed as the first units of Canada's permanent military force in 1871 in Kingston
Kingston, Ontario
Kingston, Ontario is a Canadian city located in Eastern Ontario where the St. Lawrence River flows out of Lake Ontario. Originally a First Nations settlement called "Katarowki," , growing European exploration in the 17th Century made it an important trading post...
and Quebec City
Quebec City
Quebec , also Québec, Quebec City or Québec City is the capital of the Canadian province of Quebec and is located within the Capitale-Nationale region. It is the second most populous city in Quebec after Montreal, which is about to the southwest...
respectively, with a third ('C' Battery) authorized in 1883 and formed in 1887 in Esquimalt
Esquimalt, British Columbia
The Township of Esquimalt is a municipality at the southern tip of Vancouver Island, in British Columbia, Canada. It is bordered to the east by the provincial capital, Victoria, to the south by the Strait of Juan de Fuca, to the west by Esquimalt Harbour and Royal Roads, to the northwest by the...
. These bore the name of the Regiment of Canadian Artillery, with the Royal Canadian Artillery being formed as the militia
Militia
The term militia is commonly used today to refer to a military force composed of ordinary citizens to provide defense, emergency law enforcement, or paramilitary service, in times of emergency without being paid a regular salary or committed to a fixed term of service. It is a polyseme with...
element in 1895. In 1905, to distinguish between the regular force and militia, the regulars were given the title Royal Canadian Horse Artillery.
Today, the regular force encompasses three RCHA regiments:


In addition to the three regiments currently serving, two further regiments have served in the past prior to being disbanded: